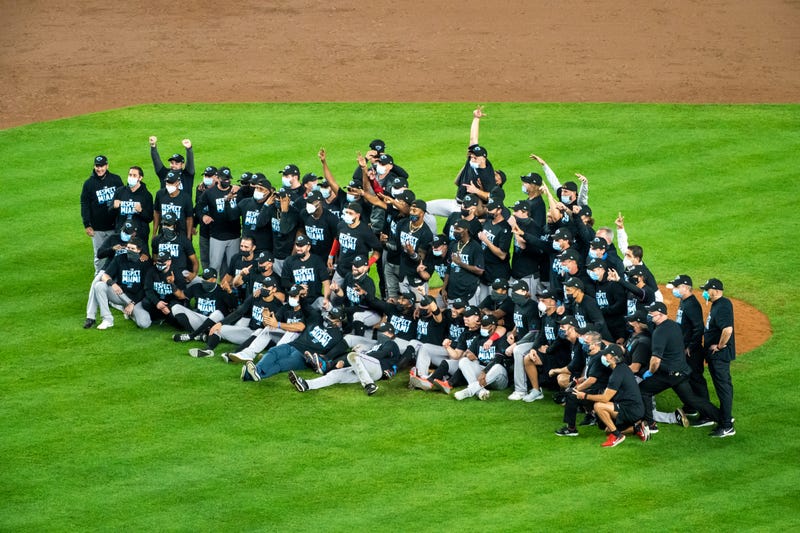 Photo credit The Miami Marlins gather for a photograph on the pitcher's mound after clinching a playoff berth when they won in the 10th inning of a baseball game against the New York Yankees at Yankee Stadium, Friday, Sept. 25, 2020, in New York. (AP Photo/Corey Sipkin)
By The Associated Press

A look at what's happening around the majors on Saturday:

After manager Don Mattingly’s Marlins clinched a most unlikely postseason spot, three NL playoff slots are still open with two days left in the regular season. St. Louis, Cincinnati and San Francisco are all at .500 or better, Philadelphia and Milwaukee are two games under.

Cardinals star Adam Wainwright (5-2, 3.05) faces Milwaukee’s Brandon Woodruff (2-5, 3.43) at Busch Stadium. Wainwright has dropped lost two of his past three decisions after starting the season 4-0. His last win came against the Brewers on Sept. 16 when he went the distance in the opener of a seven-inning doubleheader.

White Sox outfielder Eloy Jiménez has a sprained right foot, likely sidelining him for this season-ending series against the crosstown Cubs.

The White Sox have dropped a season-high six in a row, falling out of first place in the AL Central. They are hoping to get back on track heading into their playoff appearance since 2008, but the health of Jiménez is a concern.

Jiménez is batting .296 with 14 homers and 41 RBIs. The 23-year-old left fielder was hurt sliding across the plate in a game Thursday. Manager Rick Renteria says Jiménez needs “to be off his feet” for a few days.

The Padres hope Mike Clevinger will be able to pitch in the playoffs next week after getting a cortisone shot for his ailing right elbow.

Acquired last month in a big trade with Cleveland, Clevinger left his start against the Angels on Wednesday after just one inning.

The Padres have already clinched a postseason spot and the NL’s No. 4 seed, and will open the playoffs next Wednesday at Petco Park. Before the early exit, Clevinger had been presumed as the Game 1 starter in the wild-card round.

“We have not ruled out anything for next week and the first round of the playoffs,” Padres general manager A.J. Preller said.

DeGrom (4-2, 2.14) ranks among the NL leaders in ERA, strikeouts and Wins Above Replacement, but he has tough competition in the Cubs’ Yu Darvish, Reds’ Trevor Bauer, Padres’ Dinelson Lamet and others.

DeGrom could join the late Tom Seaver as the only Mets pitchers to win a trio of Cy Youngs, and the right-hander plans to honor Seaver with his footwear.

DeGrom will wear custom cleats including Seaver’s image and No. 41, and the shoes will be auctioned after the season to benefit out-of-work minor leaguers via the More Than Baseball organization.

A ninth-round pick who spent five seasons in the minors, deGrom joins Pete Alonso, Robinson Cano, Hunter Pence and Rhys Hoskins among players participating in the program this season.