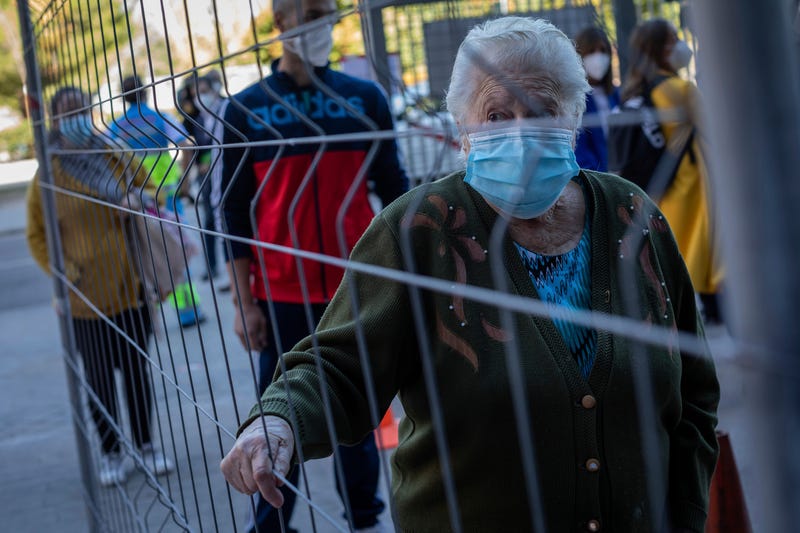 Photo credit An elderly woman lines up for a rapid antigen test for COVID-19 in the southern neighbourhood of Vallecas in Madrid, Spain, Tuesday, Sept. 29, 2020. Madrid has a rate of infection 2.5 times higher than the national average, which is already three times the European average, including the UK. (AP Photo/Bernat Armangue)
By The Associated Press

MADRID (AP) — Madrid and its suburbs prepared Thursday to enter a soft lockdown that restricts trips and out of the Spanish capital following a weeks-long political turf fight that experts say has prevented an effective response to the coronavirus in Europe's latest infection hot spot.

The Spanish Health Ministry's new standards give the country's 19 regions two days to cap social gatherings to a maximum of six people and limit shop and restaurant hours in large cities that have recorded a 2-week infection rate of 500 cases per 100,000 residents or above. The regulations also mandate restrictions on entering and leaving such cities.

Nationwide, only Madrid and nine of its suburban towns met the criteria as of Thursday, with a regional infection rate of 784 cases per 100,000 people. The publication of the Health Ministry standards in Spain's official gazette Thursday means the regional government needs to issue by Friday evening its own orders laying out specific measures and their effective date.

The center-right regional government has resisted the stricter curbs in the city of 3.3 million and its suburbs due to concerns about damaging the economy.

Speaking at the regional assembly, Díaz Ayuso accused Spain’s left-wing coalition government of targeting Madrid with an “arbitrary” order for political reasons and disregarding her efforts to contain the second wave of the virus.

“This government is not in rebellion,” Díaz Ayuso said, adding that she would challenge the new regulations in court “to defend the legitimate interests of the people of Madrid so that the measures conform to the reality, so they are objective and fair.”

Díaz Ayuso said her legal challenge was intended to avoid a “return to the queues of hunger and unemployment” from earlier in the pandemic that she blamed on the national government led by Socialist Pedro Sánchez.

Spanish Deputy Prime Minister Carmen Calvo responded that “the national government only has one adversary, the pandemic.” The regional government, Calvo said, “has a right to appeal the order, but they are obliged to execute it.”

Confirmed COVID-19 cases have risen steadily nationwide since a state of emergency declared over the pandemic ended in late June. Sánchez handed over control of health systems to regional governments, but they approached summer outbreaks with different strategies and results.

While contact tracing has been almost invisible in the Madrid region, officials there have spent 50 million euros ($58 million) in building a “pandemics hospital” with 1,000 beds that they expect to be ready by the end of the year. Regional officials have accused the central government of not helping enough to provide widespread testing and other programs to curb outbreaks.

Dr. Salvador Mancip, a researcher with the University of Leicester and the Open University of Catalonia, said the European Union should establish science-based criteria that dictate specific outbreak-response measures rather than leaving up to countries or regions to make decisions based on different thresholds.

“While in the U.K. restrictions are being implemented when the rate of infection soars over 100, Madrid has waited to start discussing them with a rate 10 times higher,” said Mancip, the author of ‘Modern Epidemics,’ a book about how major outbreaks and illnesses have unfolded during the 20th and 21st centuries.

He cited Spain and the United States as examples of how politically shaken countries have some of the world's highest coronavirus caseloads, suggesting that chaotic politics could have a direct effect on death tolls.

“Severe measures should be taken as early as possible in order to shorten their time span, and that's what politicians haven't understood yet," the researcher said. “The mistake of not acting fast and bluntly is paid later by restrictions that need to be taken and have damaging effects.”

Spain has reported a total of 770,000 coronavirus cases, the most in Europe, and 31,791 virus-related deaths, the continent's third-highest official death toll in the pandemic after the U.K. and Italy. According to experts, all numbers understate the true toll of the pandemic due to limited testing and other factors.