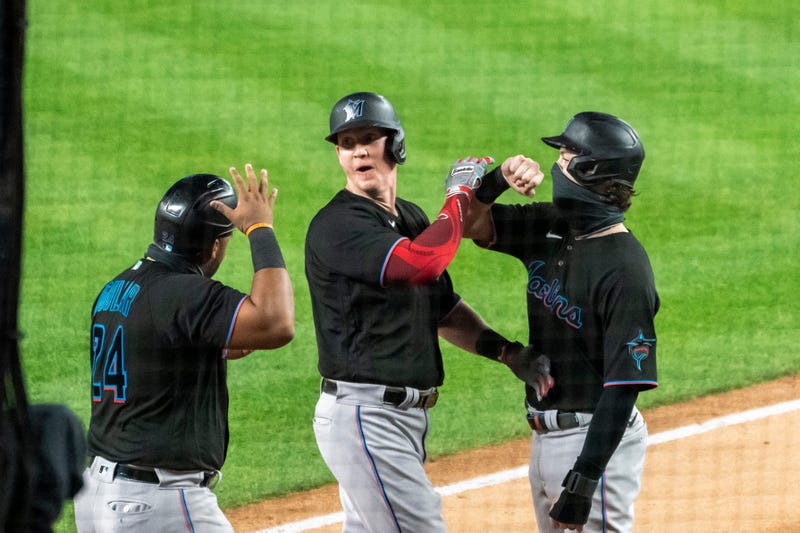 Photo credit Miami Marlins' Garrett Cooper at center celebrates his three-run home run with Jesus Aguilar at left and Brian Anderson during the first inning of a baseball game against the New York Yankees at Yankee Stadium, Friday, Sept. 25, 2020, in New York. (AP Photo/Corey Sipkin)
By The Associated Press

NEW YORK (AP) — The Marlins clinched an improbable playoff berth in their coronavirus-decimated season, beating the New York Yankees 4-3 in 10 innings Friday night to seal a postseason trip on the field of the team that Miami CEO Derek Jeter and manager Don Mattingly once captained.

Miami earned its first postseason trip since 2003 when it won the World Series as the Florida Marlins, capped by a Game 6 victory in the Bronx over Jeter and his New York teammates at the previous version of Yankee Stadium.

The Marlins had the worst record in the NL last year at 57-105, then was beset by a virus outbreak early this season that prevented it from playing for more than a week.

After Jesús Aguilar hit a sacrifice fly in the top of the 10th, Marlins reliever Brandon Kintzler got major league batting leader DJ LeMahieu to ground into a game-ending double play with the bases loaded.

The Marlins became the first team to make the playoffs in the year following a 100-loss season. Miami was one of baseball’s great doubts at the start of the shortened season, forced off the field when 18 players tested positive for COVID-19 following the opening series in Philadelphia.

Miami is second in the NL East at 30-28 and improved to 19-13 on the road, The Marlins will play 34 road games due to the schedule disruption caused by the coronavirus; they arrived at their hotel at 5:30 a.m. following a rain-delayed win in Atlanta.