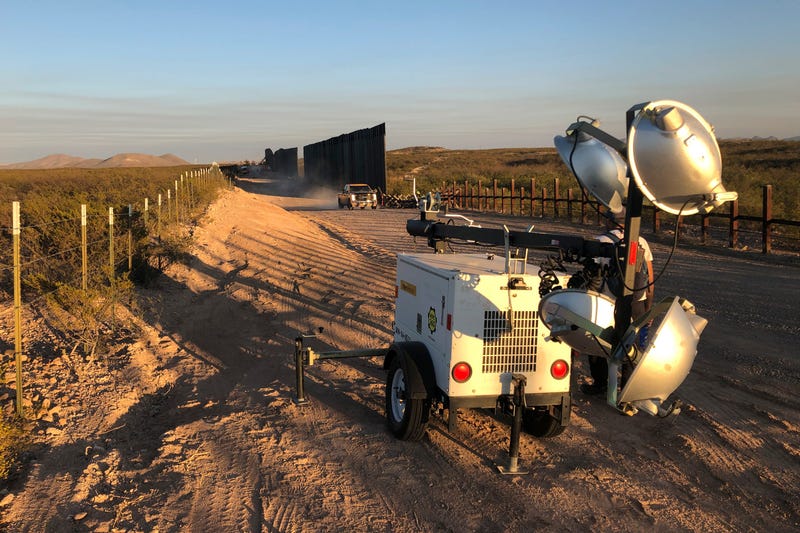 Photo credit This January 2020 photo provided by the Center for Biological Diversity shows construction on a new border wall in the wetlands at the San Bernardino National Wildlife Refuge in southeastern Arizona. The federal agency in charge of the refuge warned for several months that pumping water to build a border wall would decimate the habitat, and correspondence obtained by two environmental groups shows that U.S. Customs and Border Protection ignored most of those warnings and pulled water from wells so close to the refuge that some of its ponds went dry. (Laiken Jordahl/Center for Biological Diversity via AP)
By The Associated Press

PHOENIX (AP) — The agency in charge of building the border wall received repeated warnings: tap water from nearby wells, and the unique wetlands of southeastern Arizona — yes, Arizona — home to a variety of wildlife and endangered fish will go dry.

Immigration officials didn’t head those warnings. Then, several ponds at the San Bernardino National Wildlife Refuge found themselves without water or with an extremely low supply, according to documents obtained by two different environmental groups.

The U.S. Fish and Wildlife Service, the agency in charge of the refuge, said in a statement on Thursday that ponds “remain intact and the refuge continues to manage for endangered fish and wildlife.”

Contractors working for U.S. Customs and Border Protection began building a new stretch of border wall there in October, pumping millions of gallons of groundwater to mix cement for the 30-foot (9-meter) steel fencing that has been a signature promise of President Donald Trump. The Trump administration has promised to build 450 miles (724 kilometers) of wall along the border with Mexico by the end of this year; it has so far built 275 miles (443 kilometers).

The San Bernardino National Wildlife Refuge was established in 1982 to protect the rare wetlands in the middle of the desert that are home to a variety of wildlife, including several species of fish that are protected by the Endangered Species Act. Sitting on over 2,300 acres on the U.S.-Mexico border in southeastern Arizona, close to New Mexico, the refuge is home to hummingbirds, 75 species of butterflies, bats and, most importantly, to fish native to Rio Yaqui, which the refuge was set up to protect.

“It’s a pretty magical place," said Randy Serraglio, Southwest conservation advocate for the Center for Biological Diversity. "The analogy is an oasis, really. That’s why the water withdrawals are so damaging."

The refuge itself is supposed to be protected under environmental laws, but the government has waived those in the name of border security.

Other than the Fish and Wildlife Service employees who manage the refuge, and the environmental groups that oppose construction, the refuge and other ecological treasures have no protections when it comes to border wall construction.

Dozens of records obtained by the Center for Biological Diversity, which has sued to stop border wall construction, show months of warning from the U.S. Fish and Wildlife employees in charge of the refuge that went largely ignored.

The agency pleaded with CBP to refrain from drilling groundwater from any wells within a 5-mile (8-kilometer) radius of the refuge, using a 2003 study showing that doing so would be detrimental to the water supply.

CBP did so anyway.

A report by the Fish and Wildlife Service that was obtained by Defenders of Wildlife, another conservation group that opposes border wall construction, shows that contractors withdrew millions of gallons of water from a well that’s 1.5 miles (2.4 kilometers) from the refuge, resulting in the lower water levels within the refuge and even some empty ponds.

As of Friday, Customs and Border Protection had not responded to questions about the issue sent by The Associated Press on Wednesday.

Serraglio, with the Center for Biological Diversity, said CBP ignoring concerns by Fish and Wildlife shows that it’s a “rouge agency.”

“They operate outside the law with no regard for other federal agencies and public lands and natural resources and the national heritage of this country,” Serraglio said. “It’s the only thing they care about, is the wall.”

San Bernardino Refuge Manager Bill Radke first expressed written concern in June 2019 and many times since, but felt ignored and out of the loop, according to the records. Radke did not respond to a request for comment.

In an email to Fish and Wildlife staff on Nov. 22, Radke wrote that he has “repeatedly and consistently” requested CBP not pull water from wells within 5 miles of the refuge, adding that “we are already experiencing the impacts that were predicted.” Ponds dropped as much as a foot of water, which Radke wrote was unheard of during the winter season, when the wetlands experience less evaporation and no transpiration.

A Fish and Wildlife spokeswoman said in a statement that the agency continues to coordinate with CBP “and has a positive working relationship with the agency.”

She said Fish and Wildlife has documented a correlated drop in deep aquifer well head pressure and that the refuge recently found larger capacity pumps are now needed to maintain pond levels and outflows, adding that the contractor in charge of the project has purchased and is installing those higher capacity pumps.