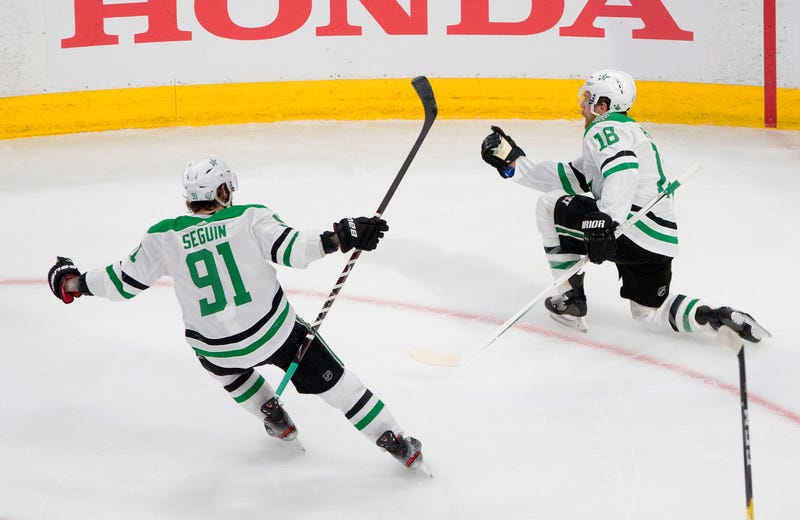 Pavelski scored his 13th goal of the playoffs with 6:45 left in the third period and Dallas and Tampa Bay took Game 5 of the Stanley Cup Final into overtime Saturday night tied at 2-2. The Stars trail the series 3-1 and are one Lightning goal from elimination.

Pavelski, in the final for the second time in his career after losing in 2016 with San Jose, tied Tampa Bay's Brayden Point for the most goals this postseason. He also moved into sole possession of first among Americans with 61 career playoff goals.

He wasn't alone in getting Dallas to overtime.

Stars goaltender Anton Khudobin stopped Point on a shot in the final seconds of the second period. Khudobin made six more saves in the third to give him 28 for the game.

There wasn’t much he could do on Ondrej Palat’s 11th of the postseason 4:37 into the second. The top-line winger got the puck from Nikita Kucherov, skated around usually dependable Dallas defenseman Esa Lindell and Khudobin before depositing it into a mostly empty net.

Stars winger Alexander Radulov had a big hand in Corey Perry’s goal that opened the scoring by shaking up defenseman Mikhail Sergachev with a check. With Sergachev in pain, Tyler Seguin carried the puck toward the net, Perry ended up with it on his stick and he lifted it past Andrei Vasilevskiy for his second goal in as many games. Vasilevskiy has 13 saves.

The Stars have been playing with five defensemen since midway through the first period when veteran Andrej Sekera limped off after blocking a shot from Sergachev. Sekera tested the injury after the first intermission but went right back down the tunnel.

Dallas can ill afford another injury after adding forward Roope Hintz to their growing list of unavailable players. Hintz was injured in Game 4 Friday night when he crashed into the boards. Forwards Radek Faksa and Blake Comeau, defenseman Stephen Johns and goaltender Ben Bishop are also out.

For Tampa Bay, captain Steven Stamkos was the only notable absence after he tweaked something in his triumphant Game 3 return that included him scoring on his only shot.