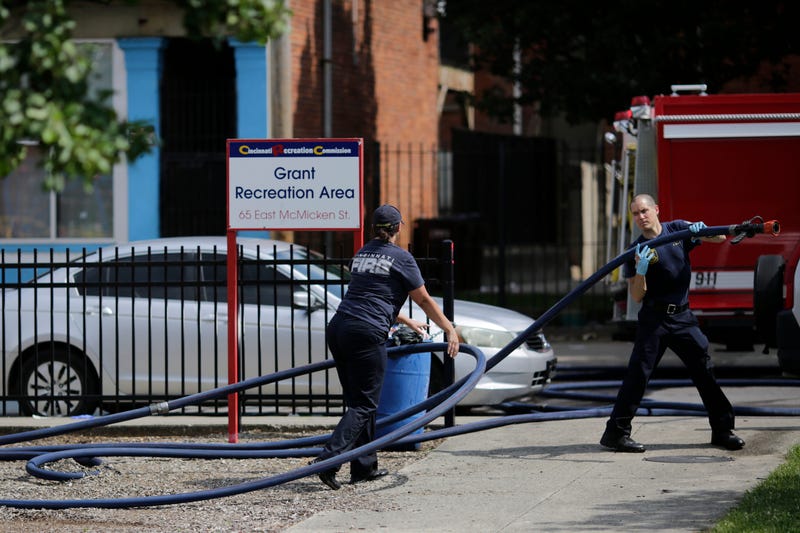 Photo credit Cincinnati firefighters use bleach and a hose to clean and remove pools of blood left at the scene of a mass shooting near Grant Park in the Over-the-Rhine neighborhood of Cincinnati on Sunday, Aug. 16, 2020. Police confirm that multiple people are injured and at least three are dead after three separate shootings occurred in the city of Cincinnati within 90 minutes early Sunday morning. (Sam Greene/The Cincinnati Enquirer via AP)
By The Associated Press

CINCINNATI (AP) — At least 18 people were shot, including four killed, as gunfire erupted in several places around the city overnight, authorities said Sunday.

Officers responded just after 12:30 a.m. Sunday to the Avondale neighborhood and found 21-year-old Antonio Blair with gunshot wounds, police said in a statement. He was taken to University Hospital and died there, they said. Three other gunshot victims were also taken to the hospital.

At about 2:15 a.m., officers responded to a report of gunfire in the Over-the-Rhine neighborhood where 10 people were shot, police said. One died at the scene and another at the University of Cincinnati Medical Center; they were identified in a statement as 34-year-old Robert Rogers and 30-year-old Jaquiez Grant.

Three people were shot at about midnight Saturday in the Walnut Hills neighborhood, about a block away from the Harriet Beecher Stowe house, police said.

News outlets reported the shootings took place within 60 to 90 minutes of each other, but Assistant Police Chief Paul Neudigate told reporters that they “seem to be separate independent incidents but horrific and tragic.”

Police didn't immediately provide details about the fourth fatal shooting but confirmed that it occurred on the city's West End, where television news reports indicated that one person was shot later Sunday morning and was pronounced dead at the scene.

No suspect information was immediately available in any of the cases.

“One extremely violent night in the city of Cincinnati. Looking at possibly 17 victims, up to four that could be fatal at this time. Why? That’s going to be the question,” Neudigate had said before the fourth shooting was announced.

“I am calling on all citizens of this great city to say enough is enough! We must not sit by silently and say we can’t do anything to end gun violence," Chief Eliot Isaac said in a statement. “We all have a moral obligation to stop the violence and stop the killing in our communities.”

Police said the department would shift officers from other assignments to beef up the number of uniformed officers in the affected communities and would call on federal prosecutors and the Bureau of Alcohol, Tobacco, Firearms and Explosives “to focus on repeat shooters and aggressively bring illegal gun charges."

Mayor John Cranley called it “senseless gun violence that ruined lives and will cause immeasurable suffering" at a time the city was facing “unprecedented circumstances and challenges" in fighting crime during the COVID-19 pandemic. He said the city has seen an uptick as people gather in private homes and public places when the bars close.

"Guns are far too prevalent at these gatherings. Please do not attend gatherings because you could end up as an innocent victim," he said in a statement.

He stressed, however, that those firing were responsible for the shootings — which he called “attempted or actual murder" — and vowed to bring them to justice.

“I am also calling on everyone to help put an end this culture of resolving personal disputes with guns as well as to reduce the far too prevalent availability of illegal guns on our streets," he said. “The very sad reality is people are getting in trouble when they have nowhere to go and nothing to do."

In July, the Enquirer reported that the city had experienced a rise in shootings and homicides from gun violence during the first half of the year as compared to the same time period in 2019.

sports
Can Cowboys avoid being third team to start 0-8 against the spread?
news
Expert reveals the key to pandemic parenting
news
Bed Bath & Beyond is cutting back on its famous 20% coupons
news
Family of nurses saves boy from drowning
music
Trick or treat! When celebrities go as other celebrities for Halloween
music
Don't be a Grinch! Build your own Whoville for the holidays