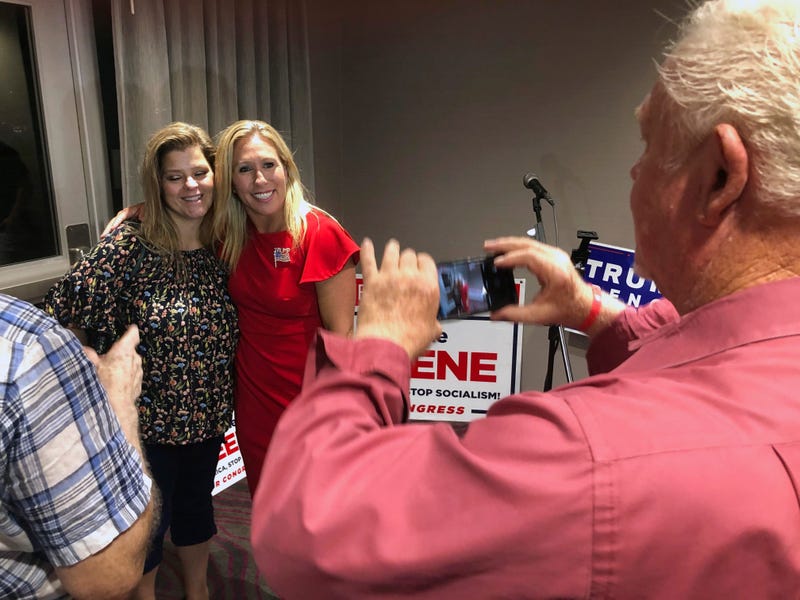 ATLANTA (AP) — Political newcomer Marjorie Taylor Greene was mocked as a supporter of QAnon conspiracies and denounced for videos deemed racist even by fellow Republicans who withdrew endorsements and declared her unfit for Congress.

The businesswoman from northern Georgia had a blunt message for her critics as she coasted to victory in a Republican primary runoff election that should put her on an easy path to winning an open U.S. House seat: “I will not apologize.”

“If Republicans want to win in 2020, they need to listen the message that I’m speaking," Greene told cheering supporters in a victory speech that railed against “spineless Republicans” and “anti-American leftists.” Targeting Democratic House Speaker Nancy Pelosi, she said: “We’re going to kick that b - - - - out of Congress.”.

Outspoken and unrepentant, Greene is proving there's a place among Republicans even for candidates whose views many consider extreme.

In one online video, Greene embraced QAnon, a far-right conspiracy theory centered on the baseless belief that President Donald Trump is waging a secret campaign against enemies in the “deep state” and a child sex trafficking ring run by satanic pedophiles and cannibals. In other videos, she said Black and Hispanic men are being held back by “gangs and dealing drugs,” alleged an “Islamic invasion” of government offices and accused Jewish billionaire George Soros of collaborating with Nazis.

“I’m a very controversial person, but I even cringed at some of the things that she said,” said Debbie Dooley, president of the Atlanta tea party and a Republican activist.

In Washington, Trump came out in support of Greene on Wednesday, all but assuring she would be welcome by Republicans in Congress, despite splinters in the party over her candidacy.

“Congratulations to future Republican Star Marjorie Taylor Greene on a big Congressional primary win in Georgia against a very tough and smart opponent,” Trump tweeted. “Marjorie is strong on everything and never gives up - a real WINNER!”

The president's praise for Greene marked a direct contrast to the condemnation from Republican lawmakers during the primary campaign.

Rep. Jody Hice, a Baptist minister and member of the conservative House Freedom Caucus, withdrew his endorsement of Greene over statements he called “appalling and deeply troubling.” Georgia GOP Rep. Drew Ferguson had said: “I just don’t think that there is a place in Congress for her.”

Calls and emails to Hice and Ferguson’s congressional offices were not immediately returned Wednesday. Georgia Rep. Austin Scott, another of Greene's GOP critics before the runoff, said in a statement Wednesday she “deserves to be congratulated for her victory.”

The No. 2 House Republican, Rep. Steve Scalise of Louisiana, had backed Greene's opponent in hopes of denying her the party’s nomination. Scalise kept silent Wednesday, as did Rep. Liz Cheney of Wyoming, the third-ranking Republican leader, who had spoken out against Greene’s comments.

Republican Rep. Adam Kinzinger of Illinois tweeted Wednesday: “Qanon is a fabrication ... no place in Congress for these conspiracies.” He didn't mention Greene by name.

In Georgia, Trump's congratulations of Greene was echoed by Republican Sen. Kelly Loeffler and GOP Rep. Doug Collins, rivals in a special election for one of Georgia’s Senate seats. Collins said Greene “created a tidal wave among the voters” and had his support. Loeffler said of Greene’s nomination: ”It’s clear that we need more outsiders with business sense in Washington.”

One former GOP congressman said Republicans should make room for Greene the same way Democrats ended up embracing Rep. Alexandria Ocasio-Cortez, a self-described Democratic socialist who won her seat by defeating a member of the House Democratic leadership.

“If the Democrats can bring people like that in and make them an asset, then Republicans certainly need to,” said Jack Kingston, who left Congress in 2015 after more than two decades representing southern Georgia.

“You can't pick and choose all your soldiers all the time,” he said.

Greene isn't the only candidate tied to QAnon marching toward Washington. Lauren Boebert, who has also expressed support for QAnon, recently upset a five-term congressman in a Republican primary in Colorado.

Greene still must face Democrat Kevin Van Ausdal on the November ballot before she can claim the 14th District seat that covers a dozen counties in Georgia's northwest corner. But the GOP primary was considered the real contest. Trump won roughly 75% of the district's votes in the 2016 presidential election, when he received 51% of Georgia's statewide vote.

“I won’t lie: It’s a tough race,” said Van Ausdal, who insists Greene's views don't reflect those of most people in their corner of Georgia. “It’s an uphill battle. But it’s important.”

Democrats are already using Greene's nomination as a weapon to paint other Republicans as too extreme. With Georgia becoming less white and suburban women offering critical swing votes, Democrats hope for upsets in two U.S. Senate races this fall. They’re also fighting to defend one House seat and pick up another in the increasingly diverse Atlanta suburbs.

"Georgia Republicans own this crisis and their mealy-mouthed statements can’t hide the fact that Marjorie Taylor Greene’s nomination is a stain on their party,” Scott Hogan, executive director of the Georgia Democratic Party, said in a statement late Tuesday.

At least one Republican in a competitive race, former GOP congresswoman Karen Handel, has spoken out against Greene for “inflammatory racist rhetoric.” Handel is running to win back the metro Atlanta seat she lost to Democratic Rep. Lucy McBath in 2018.

If tied too closely to Greene, Georgia Republicans in competitive races could risk alienating moderate voters, said Charles Bullock, a political science professor at the University of Georgia.

“I think there’s no incentive for them to get behind her," Bullock said. “And there may be a cost to pay.”