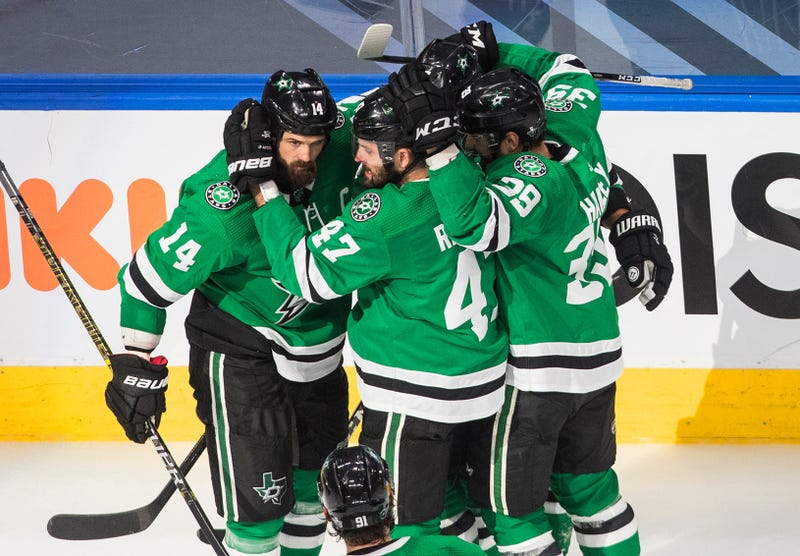 Photo credit Dallas Stars' Jamie Benn (14) celebrates his goal against the Vegas Golden Knights with Alexander Radulov (47), Joel Hanley (39) and others during the third period of Game 3 of the NHL hockey Western Conference final, Thursday, Sept. 10, 2020, in Edmonton, Alberta. (Jason Franson/The Canadian Press via AP)
By The Associated Press

EDMONTON, Alberta (AP) — Alexander Radulov scored 31 seconds into overtime on a wrister from the middle of the right circle and the Dallas Stars beat the Vegas Golden Knights 3-2 on Thursday night to take a 2-1 series lead in the Western Conference final.

Radulov's third career overtime goal was his second this postseason, and the only shot in the extra time.

Anton Khudobin had 38 saves, including 16 in the third after giving up two goals earlier in the period.

Dallas was outshot 18-4 in the third period, but had the final chance in regulation with a 3-on-1 break. Benn's wrister briefly shook up Robin Lehner, who was struck by the puck that went over the pad and hit him near his left knee as time expired.

Lehner, who had 20 saves in a game when he had a record postseason shutout streak ended, was back in net for overtime.

Vegas tied the game at 2 with 7:14 left in regulation on Alex Tuch's goal that was challenged by the Stars, who felt there was interference against Khudobin. The goalie was in front of the right post with Mark Stone against him when Tuch's shot went over his left shoulder and into the net.

The unsuccessful challenge put the Golden Knights on a power play, during which Khudobin made a pair of sprawling saves, including one when a shot by Tuch ended up under his left leg.

Dallas led 1-0 after Jamie Oleksiak scored with 17 seconds remaining in the second period, started the offensive charge when he blocked a shot by Stone, who fell down when trying to go with the Stars to the other end. Blake Comeau gathered the puck and passed to Miro Heiskanen, who pushed it to his fellow defenseman.

Oleksiak stayed ahead of Alec Martinez, and used a forehand, backhand move for the goal, with the puck going off the left leg of Lehner and then trickling into the net just inside the right post. That ended Lehner's shutout streak that had set a postseason franchise record.

Lehner had shutout wins in his previous two games, including the Game 7 winner over Vancouver in the second round, and Game 2 against the Stars two days earlier when he stopped 24 shots.

His shutout streak ended at just under 161 1/2 minutes, breaking the record of 144:04 set two years ago by Marc-Andre Fluery, the primary goalie for the Golden Knights until Lehner was acquired in a deadline trade this season.

Vegas got even on Shea Theodore's power-play goal with 16:11 left in the third period, a wrister for a long shot through traffic, only 45 seconds after his one-timer from the top of the left circle got past Khudobin but ricocheted off the far post when the Golden Knights had a 5-on-3 advantage.

But Stars captain Benn's first goal in five games put them up 2-1 with 12:25 left in regulation. He got control of the puck after a pass from Tyler Seguin, and scored on a shot that skirted under the pads and through Lehner's legs.

After the Knights and Stars became the first teams in the modern era (since 1943-44) to exchange shutouts in the first two games of a conference semifinal of final series, Game 3 was scoreless until the closing seconds of the second period — with Lehner and Khudobin both making some impressive saves.

The second period started with Lehner's glove save on Benn's shot, and another against Joe Kiviranta, the Stars rookie who had a hat trick in Game 7 in the second round against Colorado when he scored in overtime.

Esa Lindell's turnover late in the second period led to a close shot by Stone that was gloved by Khudobin. Right after that, William Karlsson had a breakaway and the puck rolled a bit on him before he knocked it into the Khudobin's body.

NOTES: Oleksiak's goal ended a 144-minute scoreless streak for Dallas since scoring on its first shot in the series, 2:36 into Game 1 that they won 1-0. ... Heiskanen has an NHL-high 17 assists this season. ... Lehner has the longest shutout streak this postseason, surpassing Thatcher Demko of Vancouver (138:40) and Semyon Varlamov of the New York Islanders (138:17). ...

UP NEXT: Game 4 on Saturday night.