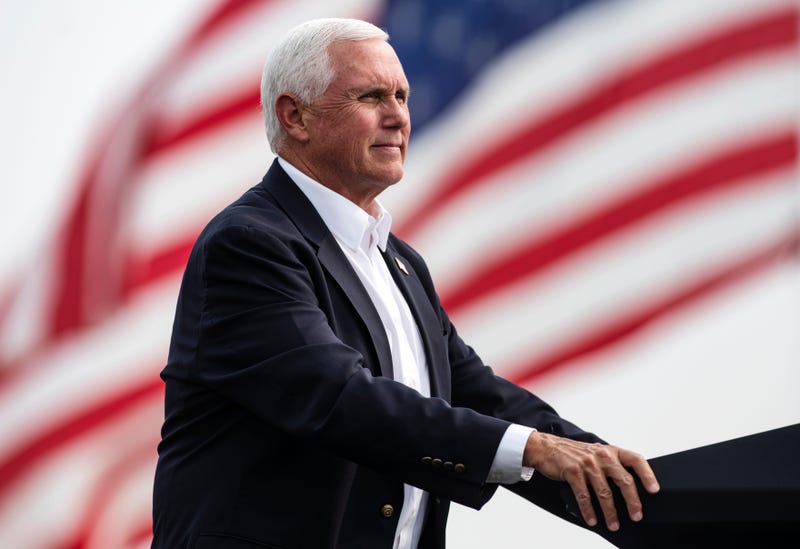 Photo credit Vice President Mike Pence looks on during a break in his speech at a Republican campaign rally in Belgrade, Mont., on Monday, Sept. 14, 2020. (AP Photo/Tommy Martino)
By The Associated Press

WASHINGTON (AP) — The Trump administration is claiming “resounding vindication” from an independent commission's report on the coronavirus crisis in nursing homes, but some panel members say that’s a misinterpretation of their conclusion that much remains to be done to safeguard vulnerable residents.

People in long-term care facilities represent less than 1% of the U.S. population but more than 40% of the coronavirus deaths, according to the COVID Tracking Project, which has tallied 77,000 deaths among residents and staff. Those harsh numbers are a sensitive political issue for President Donald Trump, who is trying to hang on to support from older voters.

Vice President Mike Pence planned to highlight the administration's work on nursing homes at an event Thursday with commission members.

The commission was set up by the Centers for Medicare and Medicaid Services, or CMS. Agency administrator Seema Verma called its findings “an invaluable action plan for the future and a resounding vindication of our overall approach to date.”

But with 27 major recommendations in the commission report, it's not time for for officials to take a bow, several members noted.

“There’s an enormous to-do list in front of us,” said Terry Fulmer, a commission member and president of the John A. Hartford Foundation, which works to improve care for older adults.

The administration says it has already acted, or made progress, on most issues flagged.

“We need to get the real data that will tell us where we're still lacking testing, (protective equipment), and appropriate staffing,” she said. “We need to really watch the autumn flu season and really keep an close eye on any uptick with the virus — that's what I'm most worried about. We don’t have a national policy that we are following so we can ensure we have quality across our entire nation, so we are looking for progress there.”

Harvard professor David Grabowski, another member, said “there's a sense of ‘mission accomplished’ ” coming from the administration and “that's just not the case.”

“We were charged with providing a road map out of the crisis,” Grabowski said. “We weren’t asked to evaluate the CMS response or provide any kind of valuation as to how they have handled the pandemic.”

Among the top recommendations in the 186-page report:

—establish a national testing strategy. After a stumbling start in which the White House tried to delegate testing in nursing homes to the states, the administration has been shipping fast-test machines to facilities. But there's concern about ongoing supplies, staff training, and other issues.

—guarantee supplies of PPE, or personal protective equipment. Earlier this summer, as COVID-19 rebounded across the South and West, 1 in 5 nursing homes faced PPE shortages. The commission called on the government to take responsibility, guaranteeing a three-month supply of high-quality gear for facilities. The administration says it has provided money for PPE and in August began shipping N95 masks to nursing homes that reported shortages.

—safely resume family visits. Nursing homes have been in lockdown since mid-March, and that has taken a toll on the well-being of residents. Some facilities have started to allow visits again. The commission recommended a detailed template for how nursing homes can safely resume visitation. The administration says it has already provided guidance.

—more help with infection control. Moving residents within a facility to separate those infected with COVID-19 is one of the main ways to contain outbreaks. But that can involve added costs and challenges. The commission said clearer government guidance is needed.

The ravages of the coronavirus in nursing homes have surprised and shocked many people. Experts such as Grabowski say their research indicates the virus gets into facilities from the surrounding communities, unwittingly carried by staff and visitors who may not yet have symptoms.

The commission concluded that the pandemic has exposed basic flaws in the nation's oversight of nursing homes, which divides responsibilities among federal, state and local authorities.

That “resulted in a patchwork approach to infection prevention and control that many believe has contributed to our nation’s inability to contain the spread of the virus,” the report said.

University of Chicago professor Tamara Konetzka, an expert on long-term care who reviewed the commission's report, said the recommendations “follow the growing consensus over the past six months about what needs to be done to stem the cases and deaths in nursing homes.”

But she also took issue with the administration's claims it has met the moment.

“I would classify the CMS actions to date as a move in the right direction and better late than never,” she said. “But, as we get close to 80,000 nursing home deaths and counting, it’s difficult to think of the federal response as unprecedented and successful."