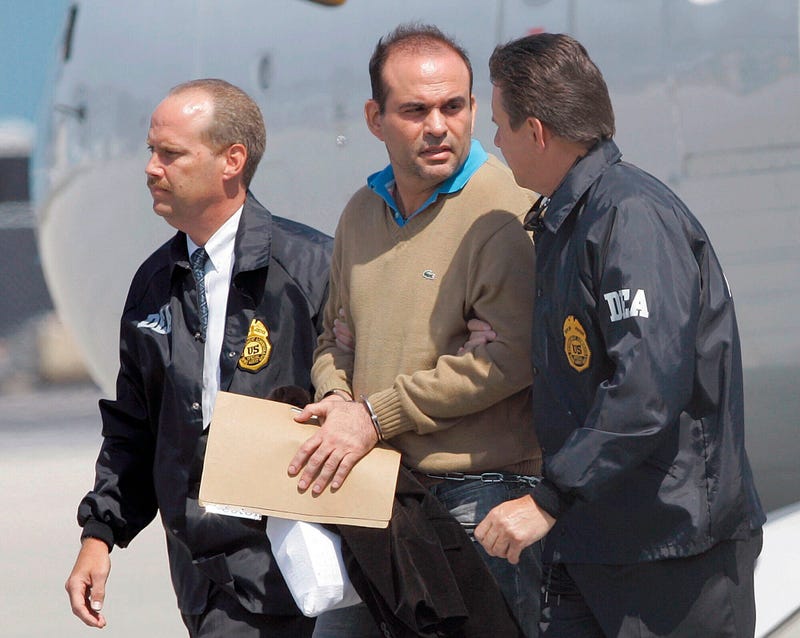 Photo credit FILE - In this May 13, 2008 file photo, Colombian paramilitary warlord Salvatore Mancuso is escorted by U.S. DEA agents upon his arrival to Opa-locka, Florida. A legal battle is quietly brewing in the U.S. in 2020 over Colombia’s request that this former paramilitary warlord be sent home after completing his drug sentence in the U.S. (AP Photo/Alan Diaz, File)
By The Associated Press

MIAMI (AP) — The Trump administration has blocked the scheduled removal of a former Colombian paramilitary boss to Italy and now intends to deport him to his South American homeland, where he’s been found responsible for hundreds of war crimes.

Salvatore Mancuso received notification of the surprise reversal on Sunday, according to two people familiar with the matter who discussed the proceedings on condition of anonymity. His lawyers have 14 days to challenge the deportation order.

Mancuso's removal to Italy, where he also has citizenship, was ordered by the Department of Homeland Security in April after he completed in March a 12-year sentence for cocaine trafficking.

But he's been held in federal custody ever since as Colombia's government fights to have him returned to continue with truth and reconciliation efforts that stalled in 2008 with the extradition to the U.S. of 14 warlords, including Mancuso, the former top commander of the United Defense Forces of Colombia, or AUC.

Just a week ago, Justine Department attorneys reaffirmed before a Washington, D.C. federal court the Trump administration's pledge to remove Mancuso to Italy no later than Sept. 4.

Attorneys for Mancuso went to court seeking to force Attorney General William Barr to carry out the April 15 order removing Mancuso to Italy, arguing that that U.S. Immigration and Customs Enforcement had “illegally detained” their client beyond the maximum 90 days allowed for the removal of aliens.

However, in substituting Colombia for Italy, U.S. officials cited a provision in the U.S. Immigration and Nationality Act that allows the Attorney General to disregard the country designated for an alien's removal if it is deemed that carrying out the order would be “prejudicial to the United States," according to the two people familiar with the proceedings.

The Justice and State Department declined to comment, referring all inquiries to DHS, which didn't respond to the AP's request.

Mancuso can still prevent his removal to Colombia if granted asylum in the U.S. like his ex-wife and youngest child. In March, his immigration attorney told DHS officials that Mancuso had already signed an asylum application, saying his client was “terrified" by the prospect of returning to Colombia.

"There is absolute certainty about the torture he would face and the likelihood of his assassination," attorney Hector Mora wrote in a letter to DHS officials, which came to light in recent court filings. “He is the target of many powerful groups and individuals that were incriminated, criticized, and exposed throughout his cooperation with the U.S. government, the cooperation with the Colombian judiciary, and his multiple statements."

Mancuso, 55, was the most remorseful of the former right-wing militia leaders after demobilizing and his eagerness to discuss the paramilitaries’ war crimes has already shaken Colombia’s politics.

His boast in 2005 that a third of Colombia’s congress was elected with paramilitary support triggered a wave of judicial investigations that ended with dozens of elected officials behind bars. His lawyers contend that others still in power have not hidden their desire to find a Colombian court to order Mancuso’s arrest in an effort to silence him.

This month, President Iván Duque's government submitted to the U.S. what was its fourth extradition request for Mancuso. One of the earlier requests was unilaterally withdrawn in July after Mancuso’s legal team, led by Miami defense attorney Joaquin Perez, pointed out in U.S. federal court that it was based on an arrest order already canceled by a Colombian judge.

It’s not clear what happened to the other two requests but neither has been validated by a U.S. court. While Colombian courts have judged Mancuso responsible for more than 1,500 acts of murder or forced disappearance, many of the crimes are not recognized as offenses under U.S. law because they stem from his position atop AUC’s chain of command — not specific orders he gave. In 2001, the U.S. designated the AUC a foreign terror organization.

Mancuso’s lawyers argue the former paramilitary boss has fulfilled his obligations under a 2003 peace deal he negotiated, which caps prison terms at eight years for militia leaders who confess their crimes.