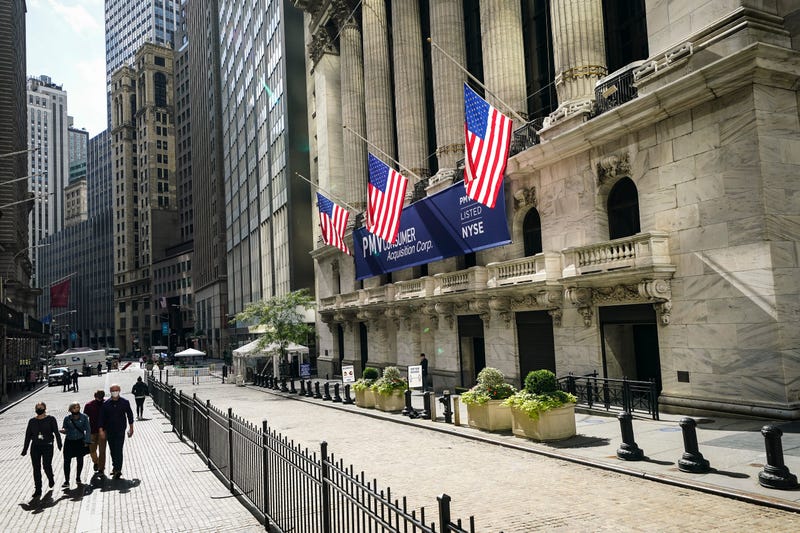 NEW YORK (AP) — Stocks closed broadly higher Monday as hopes for economic aid from Washington helped Wall Street recover its losses from its initial, fearful reaction after learning that President Donald Trump tested positive for the coronavirus. The S&P 500 climbed 1.8%, and the gains were widespread. Energy and technology stocks had some of the biggest gains. Treasury yields, stocks overseas and oil all rose after Trump and House Speaker Nancy Pelosi both noted the importance over the weekend of additional support for the economy. Trump also tweeted that he’ll leave the hospital later Monday, though his condition remains clouded in uncertainty.

THIS IS A BREAKING NEWS UPDATE: AP’s earlier story appears below.

Stocks are rising Monday, as hopes for economic aid from Washington help Wall Street recover all the losses from its initial, fearful reaction after learning that President Donald Trump tested positive for the coronavirus.

The S&P 500 was 1.6% higher in afternoon trading amid widespread gains. Energy companies, raw-material producers and other companies that would benefit most from a strengthening economy were helping to lead the way.

Treasury yields, stocks overseas and oil were all climbing after Trump and House Speaker Nancy Pelosi both noted the importance over the weekend of additional support for the economy. Trump also tweeted that he'll leave the hospital later Monday, though his condition remains clouded in uncertainty.

The Dow Jones Industrial Average was up 408 points, or 1.5%, at 28,091 as of 3:04 p.m. Eastern time, and the Nasdaq composite was 2% higher. The lift follows through on a comeback that helped markets cut their losses on Friday, after Trump’s condition became publicized.

Stocks initially tumbled Friday as the jolt of uncertainty raised concerns that a White House victory for Democrat Joe Biden would mean higher taxes and tighter regulations for companies, which could drag down their profits. But analysts said a Democratic sweep of the election could also raise the probability of a big government support plan for the economy, something that investors have been clamoring for since jobless benefits and other stimulus Congress approved in March expired.

The market’s moves on Monday and late Friday suggest investors are anticipating either a large stimulus effort or the increased likelihood of a “blue wave,” said Yousef Abbasi, global market strategist at StoneX.

Stocks got an immediate lift Friday afternoon after Pelosi told airline executives to stop the furloughs of tens of thousands of workers because aid for the industry was “imminent,” either as a stand-alone effort or as part of a wider rescue package.

A stand-alone bill for airlines failed to advance in the House on Friday, but hopes remain for a larger effort.

Over the weekend, Trump tweeted from the hospital that the country wants and needs more economic stimulus. “Work together and get it done,” he said on Saturday.

A day later, Pelosi said that the two sides are making progress, but they still haven’t reached a breakthrough. “It just depends on if they understand what we have to do to crush the virus,” she said in an interview on CBS.

A report on Monday said growth for the nation's services industries last month was stronger than economists expected. It's an encouraging piece of data, but it follows a string of mixed reports that have shown some areas of the economy slowing since Congress' last round of aid expired.

“Our dark expectations in the aftermath of the COVID-19 crisis are not coming through,” said Scott Knapp, chief market strategist at CUNA Mutual Group. “The pace of the improvement is slowing, but it's still upward.”

He expects the upcoming election to throw some more volatility into the markets, but not much as investors seem somewhat indifferent to the potential outcome. He said a key signal to that indifference was the market's muted response to the news that Trump had contracted COVID-19.

“It’s pretty difficult to overstate how understated the market’s reaction was,” Knapp said.

Shares of Regeneron rose 8% after Trump received an experimental drug from the company that supplies antibodies to help the immune system fight the virus.

Trump on Friday also began a five-day course of remdesivir, a Gilead Sciences drug currently used for moderately and severely ill patients. The drugs work in different ways — the antibodies help the immune system rid the body of virus, and remdesivir curbs the virus’ ability to multiply.

Trump briefly ventured out in a motorcade on Sunday to wave to cheering supporters. His medical team reported that his blood oxygen level dropped twice, and that they gave him a steroid typically only recommended for the very sick. They also said his health is improving and that he might be discharged as soon as Monday.

MyoKardia, a biopharmaceutical company, surged 57.8% after Bristol Myers Squibb said it would buy the 8-year-old company for $13.1 billion, or $225 per share in cash.

On the losing side was DraftKings, which fell 7.3%. It and some of its existing investors are selling 32 million shares of the company's stock after it nearly sextupled in 2020.

Fujitsu President Takahito Tokita apologized Monday for the breakdown last week in the Tokyo Stock Exchange’s trading system, which the Japanese company had developed. Speaking during an online webinar, he promised to work with the exchange to prevent a recurrence of the malfunction in Fujitsu’s Arrowhead system, which caused all trading to be halted in Tokyo on Oct. 1.

By Friday, trading resumed after the problem was fixed.