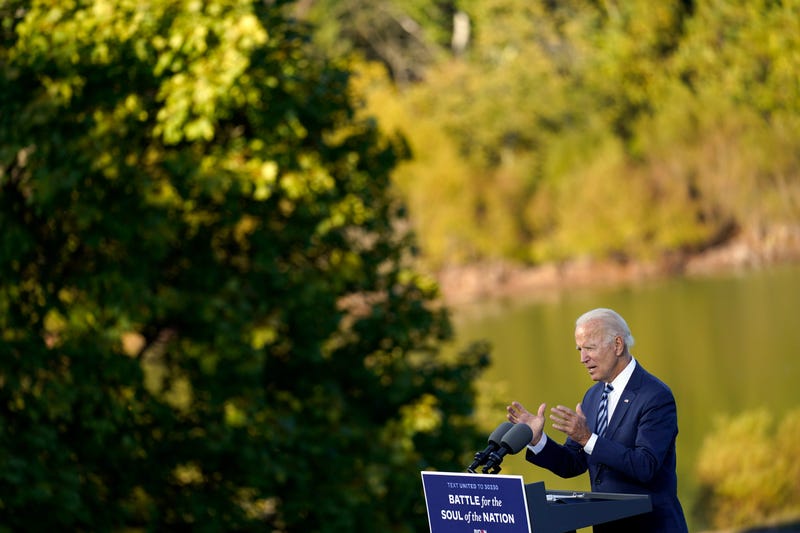 WASHINGTON (AP) — The Latest on the 2020 presidential election (all times local):

Democratic presidential candidate Joe Biden says he and President Donald Trump “shouldn’t have a debate” as long as the president remains positive for the coronavirus.

Biden said Tuesday that he’s “looking forward to being able to debate him” but said “we’re going to have to follow very strict guidelines.” He says he doesn’t know Trump’s status since the president returned to the White House after being hospitalized at Walter Reed National Military Medical Center for three days after a COVID-19 diagnosis.

Biden told reporters while boarding his plane back to Delaware in Hagerstown, Maryland: "I think if he still has COVID, then we shouldn’t have a debate.”

The next debate is scheduled for Oct. 15, with a third debate slated for Oct. 22.

HERE’S WHAT YOU NEED TO KNOW ABOUT WHAT’S HAPPENING IN THE PRESIDENTIAL RACE:

President Donald Trump is recovering from the coronavirus at the White House. He announced Tuesday that he had instructed his aides to abandon COVID-19 relief talks with congressional Democrats until after the Nov. 3 election. Democrat Joe Biden was campaigning in Gettysburg, Pennsylvania, on Tuesday.

— Trump, contagious at White House, back to downplaying virus

— 5 questions as Pence and Harris prepare for debate faceoff

Democratic presidential candidate Joe Biden says the U.S. doesn’t have to choose between “law and order” and racial justice.

Speaking near the national historic site in Gettysburg, Pennsylvania, on Tuesday, Biden cited “instances of excessive police force” and “heart-wrenching cases of racial injustice” that have inspired peaceful protests across the country. Biden says instances of violence and burning during some demonstrations “cannot be tolerated” but also should not obscure the larger issues.

President Donald Trump is campaigning as a “law and order” president and blasting racial justice protests as violent anarchy in U.S. cities led by Democrats. And the president has falsely accused Biden of calling to “defund the police” across the country.

Biden says he believes “in law and order” and has “never supported defunding the police.” But he said he also believes that “injustice is real” and rooted in 400 years of history that includes slavery, Jim Crow segregation and a fundamentally uneven economy. Biden said anyone who doesn’t see the effects of that history today hasn’t “opened your eyes to the truth in America.”

Democratic presidential candidate Joe Biden has issued a sweeping call for national unity, using a picturesque, symbolic backdrop of the bloodiest battle of the American Civil War to warn that the U.S. again is “in a dangerous place.”

Biden argued Tuesday in Gettysburg, Pennsylvania, that the U.S. can overcome centuries of economic and racial divisions, along with deep partisan rifts that have accelerated in recent years. He says some semblance of bipartisanship is necessary to defeat the COVID-19 pandemic and rebuild a battered economy.

But he said the country must “decide to cooperate” the same way that partisans have decided “not to cooperate.”

The former vice president again denounced white supremacy and promised he’d “provide for the common good” and ensure there is “no place for hate in America” if he’s elected.

Biden didn’t mention President Donald Trump and instead invoked Abraham Lincoln and called for Americans to listen to the “better angels” that the 16th president spoke of during the Civil War.

Americans “can’t undo what has been done,” Biden said, but the nation “can do so much better.”

Joe Biden has again tested negative for the coronavirus.

His campaign announced Tuesday afternoon that the Democratic presidential nominee underwent another round of testing for the virus earlier in the day and it “was not detected.”

It was Biden’s fourth negative test since last week’s debate in Cleveland, where he shared a stage for 90 minutes with President Donald Trump. Trump announced Friday that he had tested positive for the virus. He was hospitalized for three days but returned to the White House on Monday evening to continue his recovery.

Biden was tested twice hours just after Trump’s announcement, both by doctors in Delaware and by a former White House physician. He underwent subsequent tests on Sunday and Tuesday -- and all came back negative.

The Centers for Disease Control and Prevent recommends quarantine for people who were exposed to the virus, but Biden’s campaign won’t say whether he considered doing that.

Sen. Kamala Harris tested negative for the coronavirus on Monday, two days before her debate with Vice President Mike Pence.

A campaign aide shared the results on Tuesday. The campaign did not respond to questions about if and when she would be tested again ahead of Wednesday’s debate.

Harris, the Democratic vice presidential nominee, and Pence will participate in a 90-minute debate at the University of Utah in Salt Lake City. A plexiglass shield will be between them as a precaution against possible virus transmission. They will not wear masks on stage, nor will the moderator.

The Commission on Presidential Debates requires everyone accessing the debate site to have tested negative. Both Harris and Pence are currently in Utah preparing.

Vice President Mike Pence’s doctor says Pence does not need to quarantine and has continued to test negative for COVID-19 as he prepares for Wednesday’s vice presidential debate.

White House physician Dr. Jesse Taylor Schonau says in a memo released Tuesday that Pence “has remained healthy, without any COVID-19 symptoms” and has continued daily tests, which have all come back negative.

The doctor said Pence is not considered to have had close contact with anyone who has tested positive this week, including President Donald Trump and some of his senior aides, according to Centers for Disease Control and Prevention guidelines.

The CDC defines close contact as having been within six feet of someone for 15 minutes or more.

The memo says Pence “is encouraged to go about his normal activities and does not need to quarantine.”

Michelle Obama is going after President Donald Trump in a scathing new video that accuses him of “willful mismanagement” of the coronavirus crisis and of racism. She calls on Black and all young voters not to “waste” their votes.

In the video, released Tuesday by Joe Biden’s campaign, Mrs. Obama notes that more Americans have died from COVID-19 than died in the Iraq, Afghanistan, Vietnam and Korean wars combined. She charges that with respect to the virus, “our commander in chief, sadly, has been missing in action.”

Mrs. Obama accuses Trump of being “racist” when he and other Republicans are “lying about how minorities will destroy the suburbs,” which she says is meant to “distract from his breathtaking failures.”

She also calls on undecided voters “to think about all those folks like me and my ancestors” and have some empathy for what it’s like “to walk around your own country scared that someone’s unjustified fear of you could put you in harm’s way.”

And to Black and brown voters, and all young voters, who are considering sitting out the election, Mrs. Obama urges them to make a plan to vote, because “we don’t have the luxury to assume that things are going to turn out okay.”