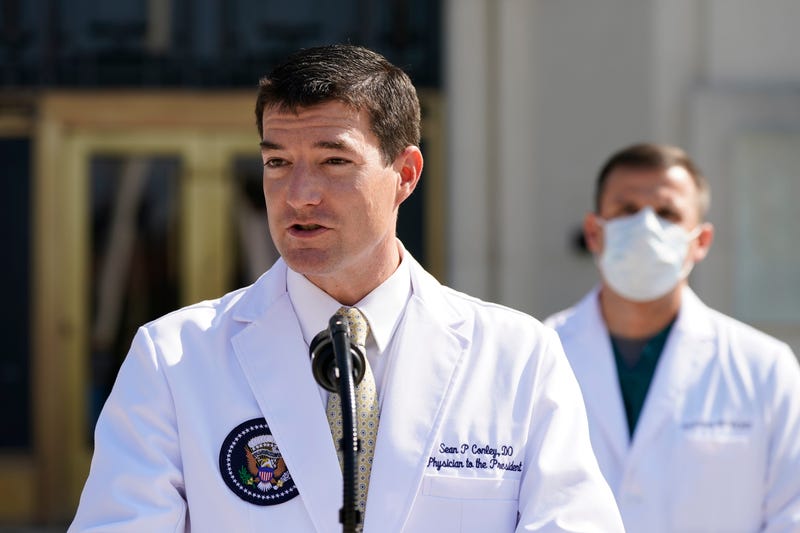 WASHINGTON (AP) — The Latest on coronavirus infections hitting President Donald Trump and others in his circle (all times EDT):

The president’s physician says President Donald Trump was treated with a steroid after a drop in oxygen levels on Saturday.

Dr. Sean Conley said at a news conference on Sunday that he was given the steroid dexamethasone while he was hospitalized at Walter Reed National Military Medical Center.

Conley said the president’s oxygen level had dropped down to 93% on Saturday. He says the president did not feel short of breath.

He says the president’s medical team is hoping Trump will be up and about, out of bed and eating and drinking throughout the day.

President Donald Trump’s doctors are set to brief the public on his condition late Sunday morning after he spent a second night hospitalized with COVID-19.

Navy Cmdr. Dr. Sean Conley, the president’s physician, and the rest of his medical team are expected to provide an update on Trump’s treatment at Walter Reed National Military Medical Center. The briefing is expected to begin at 11:30 am.

Saturday’s briefing featured mixed messages, as Conley painted a rosy picture of the president’s health, only to see White House chief of staff Mark Meadows later say officials were very concerned with the president’s condition before he was hospitalized.

A small group of Trump supporters gathered outside the hospital on Sunday, some waving large blue Trump flags and others holding smaller American flags and Trump-Pence reelection signs. The song “God Bless the U.S.A.” played in the background, occasionally interrupted by the supportive honking of a car horn, as the group waved the flags and paced back-and-forth outside the entrance to the military installation. A much larger group had gathered Saturday night cheering for the president.