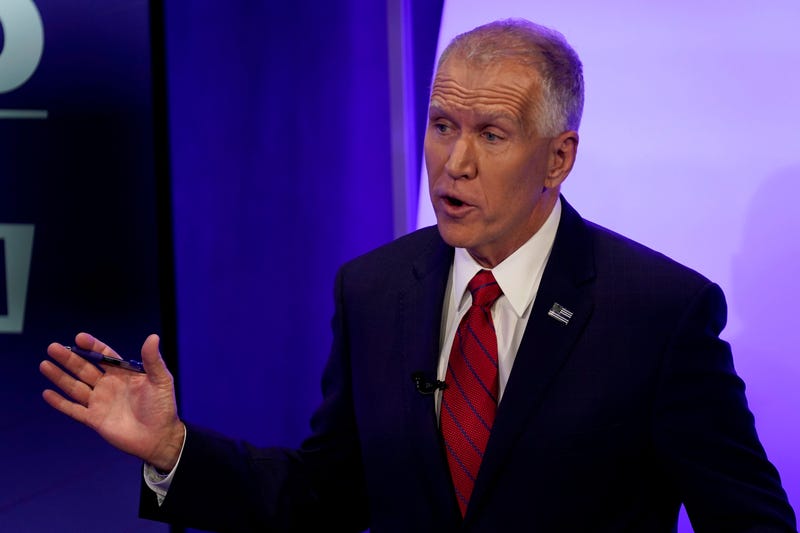 WASHINGTON (AP) — The Latest on President Donald Trump testing positive for the coronavirus and being hospitalized (all times EDT):

Republican Sen. Thom Tillis of North Carolina has tested positive for the coronavirus.

Tillis said in a statement Friday night that his rapid antigen test showed that he is infected. He issued the statement as President Donald Trump was being treated at Walter Reed National Military Medical Center for the same illness.

Tillis, who is up for reelection in November, is the latest person to be diagnosed with the infection after attending the Supreme Court nomination ceremony in the White House Rose Garden for Amy Coney Barrett. Tillis was wearing a mask at the ceremony.

He is the second member of the Senate Judiciary Committee to test positive. Just a few hours earlier, Republican Sen. Mike Lee of Utah announced that he, too, is infected.

Tillis is routinely seen on Capitol Hill wearing a mask. He says he has no symptoms but will be isolating.

The president announced early Friday that he had tested positive for the coronavirus, and the White House said later in the day that he would be going to a military hospital for “a few days” for treatment. His Democratic challenger, Joe Biden, and his wife, Jill, said they tested negative after encountering Trump at Tuesday's debate.

— Trump going to hospital for a ‘few days’ for virus treatment

Graham tweeted Friday evening that “Any Senator who wants to participate virtually will be allowed to do so.”

Graham’s message came out as Trump traveled to Walter Reed National Military Medical Center for treatment at the advice of his doctors. His doctors say he is experiencing mild symptoms.

Graham said he had been tested for COVID-19 following his interaction with fellow Judiciary Committee member Republican Sen. Mike Lee, who has tested positive.

Graham said his test for the coronavirus was negative. He said Lee is “in good spirits and on the mend” and expects to be back to work with the committee by Oct. 12, set as the date for the beginning of the confirmation process.

Marine One landed near the military hospital on Friday evening, and Trump was driven to the large complex. White House officials say that the visit is precautionary and that Trump will work from the hospital’s presidential suite, which is equipped to allow him to continue his official duties.

When he walked out of the White House, he was wearing a mask and gave a thumbs-up to reporters. He also released a video on Twitter, saying, “I think I’m doing very well, but we’re going to make sure that things work out.”

White House press secretary Kayleigh McEnany said that Trump “remains in good spirits, has mild symptoms, and has been working throughout the day.”

Shortly before he departed for the hospital, his personal physician, Dr. Sean Conley, said in a memo issued by the White House that he had received an experimental antibody cocktail.

President Donald Trump has appeared in public for the first time since his COVID-19 diagnosis, giving a thumbs-up before he boarded Marine One for a military hospital.

Trump walked out of the White House to the helicopter Friday evening on his way to Walter Reed National Military Medical Center.

The White House says Trump will spend a “few days” at a military hospital on the advice of his physicians after contracting COVID-19.

The White House says that the visit is precautionary and that Trump will work from the hospital’s presidential suite, which is equipped to allow him to continue his official duties.

Earlier Friday the White House said Trump remains “fatigued” and had been injected with an experimental antibody drug combination for the virus that has killed more than 205,000 Americans and spread to the highest reaches of the U.S. government.

Joe Biden’s campaign is taking down its attack ads in the wake of President Donald Trump’s coronavirus infection.

That’s according to a Biden campaign official who spoke on the condition of anonymity on Friday to discuss internal planning.

The Democrat’s campaign is removing all its negative ads, although in some cases, it may take days for ads already in circulation to stop running. The official says Biden made the decision before news surfaced that Trump was being transferred to a military hospital for a “few days” of treatment.

At least so far, Trump’s campaign has not begun removing any of its attack ads against Biden.

The presidential election is just over one month away.

Obama said Friday that even during “big political battles” it’s important to remember that “we’re all Americans, and we’re all human beings.”

He spoke during a virtual fundraiser with Democratic vice presidential nominee Kamala Harris.

Obama says he and his wife, Michelle Obama, hope for a speedy recovery for Trump and the first lady and anyone who has been affected by coronavirus around the country. Harris says she and her husband, Doug Emhoff, share their “deepest prayers” for the Trumps.

Their comments came amid news that Trump will be taken to Walter Reed National Military Medical Center for a “few days” on the advice of his doctors.

The White House says President Donald Trump will spend a “few days” at a military hospital on the advice of his physicians after contracting COVID-19.

Trump is to depart the White House by helicopter early Friday evening for Walter Reed National Military Medical Center. The White House says that the visit is precautionary and that Trump will work from the hospital’s presidential suite, which is equipped to allow him to continue his official duties.

Earlier Friday the White House said Trump remains “fatigued” and had been injected with an experimental antibody drug combination for the virus that has killed more than 205,000 Americans and spread to the highest reaches of the U.S. government.

Democrat Joe Biden says President Donald Trump testing positive for the coronavirus is a “bracing reminder” of the seriousness of the virus. He also says he’s received two tests, and both came back negative.

Speaking at an event in Grand Rapids, Michigan, on Friday, Biden said he received a test in Delaware and one from “the former White House doctor” who came up to Delaware to administer the test, “and everything’s clear.”

The president said early Friday that he and his wife, Melania Trump, had tested positive for coronavirus. Biden was tested after spending nearly 90 minutes onstage with the president during their debate earlier this week.

Biden said he wished the president and the first lady a full recovery and that “this is not a matter of politics.” Biden said it was a “reminder to all of us that we have to take this virus seriously. It is not going away automatically.”

President Donald Trump’s doctor says Trump is being treated with an experimental drug aimed at supplying antibodies to help fight his coronavirus infection.

Antibodies are proteins the body makes when an infection occurs. They attach to a virus and help it be eliminated. But it can take weeks for them to form. The drugs are purified versions of ones that seemed to work best in lab and animal tests.

It’s given as a one-time treatment through an IV.

Trump’s physician, Dr. Sean Conley, said the drug was being given “as a precautionary measure,” and that Trump also was taking zinc, vitamin D, an antacid called famotidine, melatonin and aspirin. None of those have been proven to be effective against COVID-19.

Trump apparently is not receiving hydroxychloroquine, a drug he widely promoted that has been shown in many studies to be ineffective for preventing or treating COVID-19.

Supreme Court nominee Amy Coney Barrett and her husband had coronavirus earlier this year and recovered, according to two administration officials.

The officials were not authorized to speak publicly and spoke to The Associated Press on condition of anonymity.

Barrett was nominated to the high court last week after the death of liberal Justice Ruth Bader Ginsburg. Trump held a press conference outside where few people wore masks.

Trump announced Friday that he and first lady Melania Trump had tested positive for the virus, after aide Hope Hicks was diagnosed.

Barrett has also been meeting with senators ahead of her confirmation hearing, including Republican Sen. Mike Lee of Utah, who also announced Friday that he had tested positive for the virus.

The science is unclear on whether someone who has the virus can get it again. Whether someone who’s been infected with coronavirus has protection against future infection and for how long is unknown. A large study from Iceland last month suggested that antibodies that people make to fight the virus last for at least four months. However, several cases have been confirmed of people getting COVID-19 again, months after their initial bout.

Minnesota Rep. Ilhan Omar, a frequent target of President Donald Trump’s, is blasting him for what she calls “actively spreading a deadly virus.”

Omar said earlier this year that her father died of the virus, and she said in a statement Friday that she doesn’t wish it on anyone.

Omar, a Democrat, says the nation has been waiting for months to hear Trump say America “will get through this together.” And she says he’s saying that now because it’s about him.

Trump announced earlier Friday that he and the first lady had tested positive for the coronavirus.

She criticized Trump for holding a rally and fundraiser this week in Minnesota without wearing a mask, saying he exposed hundreds of people in a state where cases are already rising.

The White House does not appear to be making any changes to current virus protocol, even after President Donald Trump and the first lady tested positive for COVID-19.

A senior White House official said Friday that masks will still not be mandatory at the White House, describing facial coverings as “a personal choice,” despite overwhelming evidence that they help to stop the spread.

And the White House is not planning to move to a different, more reliable testing system after the one it uses failed to detect that adviser Hope Hicks had the virus the day she began experiencing symptoms.

The president, his White House and his campaign have generally taken a lax approach to the pandemic, continuing to hold large events and failing to abide by social distancing recommendations.

The official, who spoke on condition of anonymity to discuss internal White House thinking, defended the current system.

The vice presidential debate between Mike Pence and Kamala Harris next week will go on as scheduled after President Donald Trump tested positive for the coronavirus on Friday.

An official with the Commission on Presidential Debates confirmed that no changes are anticipated to the Wednesday night debate in Salt Lake City. Both Pence and Harris underwent tests for the coronavirus on Friday and tested negative.

Pence’s physician said in a memo that the vice president was not considered a “close contact” of anyone infected with COVID-19 and was not required to quarantine.

President Donald Trump’s campaign manager says all campaign events involving the president and his family will either be turned into virtual events or postponed until further notice.

The announcement comes after Trump tweeted earlier Friday that he and his wife tested positive for the coronavirus.

Comedian Joe Piscopo attended the fundraiser at Bedminster on Thursday, which he described as a small gathering in New Jersey for Trump’s friends.

“It was meticulously run, from the Secret Service to COVID testing to masking,” Piscopo told The Associated Press on the phone. The president came out of the portico to talk to guests seated at tables “yards and yards” away. Piscopo said he was at the back of the crowd and