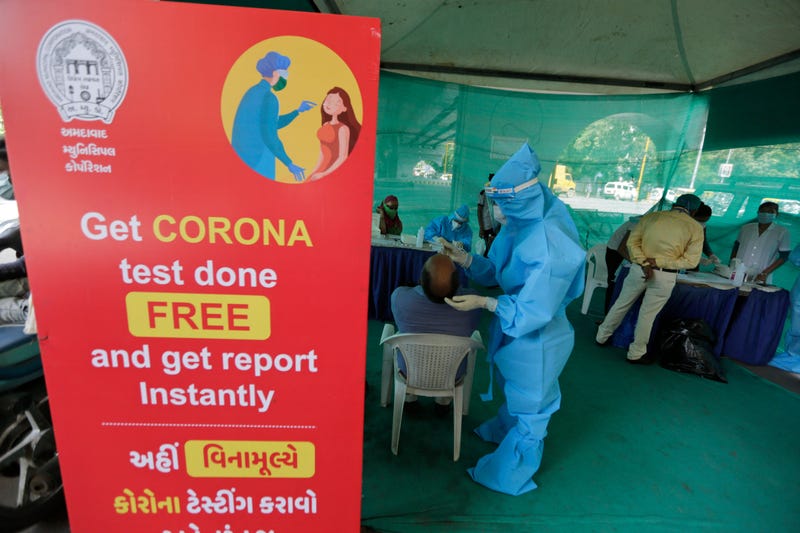 Photo credit A health worker takes a nasal swab sample to test for COVID-19 test at a facility erected to screen people in Ahmedabad, India, Tuesday, Sept. 22, 2020. The nation of 1.3 billion people is expected to become the coronavirus pandemic's worst-hit country within weeks, surpassing the United States. (AP Photo/Ajit Solanki)
By The Associated Press

Autumn is the festival season in many parts of India — a nation where religion, celebrations, rituals are paramount. The month of October has many festivals celebrated in the Indian subcontinent, including Diwali, a festival of lights celebrated by Hindus, Sikhs, Jains and others.

Dr. V.K Paul, who heads a COVID-19 taskforce in India, says people need to exercise physical distancing and ensure they wear masks while celebrating. He says large gatherings provide the perfect circumstances for the virus to spread.

— England will order pubs and restaurants to close at 10 p.m. People who can work from home will be encouraged to do so.

— Virus infections and deaths in French nursing homes are on the rise again. Nearly half of the 31,000 people confirmed to have died in France with the virus were nursing home residents.

— The only thing more difficult than staging next year’s Tokyo Olympics in a pandemic might be convincing sponsors to keep their billions of dollars on board. Tokyo needs to convince sponsors the Olympics will really happen.

ATHENS, Greece — Judicial authorities in Greece have been instructed to pursue the prosecution of anti-mask activists, who will face fast-track trials and up to a year in prison.

A Supreme Court prosecutor issued instructions distributed to prosecuting authorities Tuesday, describing the activists as a threat to public health and public order.

While its infection rate remains lower than most other European Union countries, Greece has had a sharp increase in cases since early August. The total number of confirmed infections is more than 15,000 and 344 confirmed deaths.

Anti-mask groups have recently stepped up activity online and staged small street protests, concentrating criticism on schools, which reopened on Sept. 14. Students are obliged to wear face masks in class.

Anti-mask groups argue medical advice on the effectiveness of masks has been inconsistent and public health measures introduced by the government are broadly undemocratic. The government says it is relying on the advice of leading Greek and international experts and the framework of coronavirus-related restrictions were approved by parliament.

The Austrian capital has led in the use of gargle tests, with officials saying they are less invasive than swabs but equally reliable.

THE HAGUE, Netherlands — The Dutch public health institute says the number of coronavirus infections in the Netherlands has soared to 13,471 in the past week.

That’s up from 8,265 the previous week. The weekly numbers reported Tuesday marked the third straight week of significant increases in Dutch infections.

The Netherlands, like many other Europe countries, is beginning to reintroduce measures to rein in sharply rising infection rates.

On Friday, the Dutch government announced bars and cafes will be ordered to close earlier than usual in six regions with the highest rates of infections.

Confirmed coronavirus deaths more than doubled for the week from 14 to 33, bringing the confirmed Dutch death toll to 6,291.

LONDON — Mobile apps tracing coronavirus cases were touted as a key part of Europe’s plan to beat the coronavirus outbreak.

Seven months into the pandemic, virus cases are surging and the apps have not been widely adopted due to privacy concerns, technical problems and lack of interest from the public.

Britain, Portugal, and Finland this month became the latest to unveil smartphone apps that alert people if they’ve been near someone who turned out to be infected so they can seek treatment or isolate.

But some countries have scrapped their tracing apps already while others have found so few users that the technology is not very effective.

MADRID — The Spanish capital is poised to extend its restrictions on movement to more neighborhoods due to a surge in new cases in other districts, despite an outcry from residents over discrimination.

Police on Monday deployed to 37 working-class neighborhoods that have seen 14-day transmission rates above 1,000 per 100,000 inhabitants. People are required to justify trips out of those neighborhoods.

Locals complained that the restrictions stigmatize the poor, who often live in more cramped conditions and rely on public transport to get to their jobs.

On Tuesday, 16 more districts exceeded that transmission rate threshold, and Madrid’s regional president, Isabel Díaz Ayuso, said the possibility of extending the restrictions was on the table.

TOKYO — The number of people testing positive for the virus that causes COVID-19 totaled 88 in Tokyo Tuesday, the second straight day that Japan’s capital had fewer than 100 cases.

The Tokyo Metropolitan government said Tuesday the current cumulative number for those infected by the coronavirus is 24,394 in Tokyo, 30 of them serious cases.

The drop in cases may be partly caused by the four-day weekend including two national holidays that run through Tuesday, which has people out of town for leisure and not getting tested.

The surge in crowds at airports and shopping malls during the holidays has already raised concern about another spike in cases ahead.

Japan has had about 1,500 COVID-related deaths since the illnesses began late last year, spreading from China.

SEOUL, South Korea — South Korea’s prime minister has tested negative for the coronavirus after a person working at his office was confirmed to have the virus.

Prime Minister Chung Sye-kyun’s office said Chung underwent the test on Tuesday after one of office’s staff was found to have been infected with the virus earlier in the day.

Officially, Chung is South Korea’s No.2 official and he’s been playing a leading role in government-led efforts to contain the coronavirus. South Korea’s executive power is concentrated in a president but a prime minister leads the country if the president becomes incapacitated.

The Catalonia region of Spain is cutting its required quarantine time for people possibly exposed to someone with COVID-19 from 14 days to 10.

France has also reduced its quarantine time, from 14 days to seven, despite warnings last week by the World Health Organization that even slight reductions in the length of the quarantine could have a significant effect on the spread of the virus.

He said in an interview with broadcaster TV3 that the briefer quarantine time “carries a risk, but it’s a manageable risk.” Some studies have indicated that only about half of people quarantined observe the full two-week period.

By Tuesday, Catalonia had officially recorded more than 155,500 cases — an increase of 938 from the previous day.

LONDON — British Prime Minister Boris Johnson will announce new restrictions on social interaction Tuesday as the government tries to slow the spread of the coronavirus before it spirals out of control.

Cabinet Office Minister Michael Gove told Sky News that pubs and restaurants across England will be ordered to close at 10 p.m. and people who can work from home will be encouraged to do so, reversing a government drive to get people back to the office.

The prime minister will release further details of the government’s plan when he speaks to the House of Commons at 12:30 p.m. BST (11:30 GMT). He will deliver a televised address to the nation at 8 p.m.

The new restrictions come a day after the government’s top scientific and medical advisers said virus infections were doubling every seven days and could rise to 49,000 a day by mid-October if nothing is done to stem the tide.

The latest development comes weeks after Pakistan approved advanced clinical trials for potential vaccines at the country’s main health facilities. Pakistan has said the vaccine produced by CanSinoBio, a China-based vaccine developer, and Beijing Institute of Biotechnology will be used during the clinical trials.

NEW DELHI — India on Tuesday confirmed over 75,000 new coronavirus cases and more than 1,000 deaths in the past 24 hours.

With more than 5.5 million cases, India is behind only the United States in total number of confirmed infections. India’s death toll from the virus is nearly 89,000.

So far, nearly 76% of the new virus cases are concentrated in 10 states, with Maharashtra in central India accounting for almost a quarter of new infections on Monday.

Daily new infections in India have been hovering around 90,000 for the past few days, but experts point out that testing still varies from state to state. And new surges have been detected in states that had so far been left relatively unscathed by the virus.

The central state of Chhattisgarh, where nearly half the population is poor, has seen the sharpest increase in new infections. The caseload in the state, where the health system is very fragile, has increased from around 33,000 in beginning of the month to over 86,000 now. The state government announced a weeklong lockdown of 10 districts on Monday.

LOS ANGELES — Hollywood’s unions have announced that they have reached an agreement on pandemic protocols with major studios that will allow the broad resumption of production of films and television after six months of stagnant sets and widespread unemployment.

The Directors Guild of America, the International Alliance of Theatrical Stage Employees, the International Brotherhood of Teamsters, the Basic Crafts unions and the Screen Actors Guild-American Federation of Television and Radio Artists on Monday jointly announced the deal reached with the Alliance of Motion Picture and Television Producers after months of planning and negotiating.

The deal includes mandatory and comprehensive use of personal protective gear and testing of cast and crew members, and a dedicated coronavirus supervisor to oversee it all.

It requires the use of a “zone system” that strictly limits interactions between people on sets based on their job’s requirements. Those who must deal with more people will be tested more frequently and have more strict protective equipment and spacing requirements. Actors will be tested especially often because their on-camera work won’t allow for many protective measures.

The agreement also gives 10 days of paid COVID-19 sick leave per employee, which can be used after positive tests or when quarantine is necessary, and says that employees who use the leave must be reinstated so long as their jobs still exist.

“The protocols pave the way for creative workers, who have been hard hit by the pandemic, to resume their crafts and livelihoods in workplaces redesigned around their health,” the unions said in a joint statement.