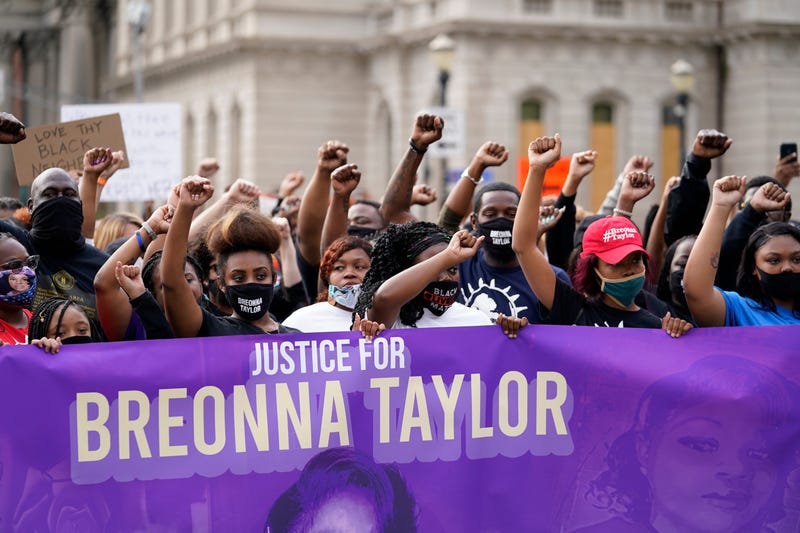 Photo credit FILE - In this Sept. 25, 2020, file photo, Black Lives Matter protesters march in Louisville. Hours of material in the grand jury proceedings for Taylor’s fatal shooting by police have been made public on Friday, Oct. 2. (AP Photo/Darron Cummings, File)
By The Associated Press

LOUISVILLE, Ky. (AP) — The latest on the release of grand jury proceedings in the Breonna Taylor case (all times local):

Body camera footage captures a police officer saying that after he and others heard that Breonna Taylor had been shot and killed, “we weren’t rushing in there to check.” The remark came during the officer’s conversation with a SWAT team that had just arrived on the scene of the botched drug raid on March 13. The footage was shown to the grand jury that was weighing whether to file charges against police. Audio recordings and transcripts of the grand jury proceedings were released publicly Friday. Officers also were captured on body camera footage asking, “Who was shooting at us?” as they apprehended Taylor’s boyfriend, Kenneth Walker. Walker fired at police when they entered Taylor’s apartment.

The lone officer indicted in connection with the botched drug raid that ended with Breonna Taylor's death says he began shooting when he saw flashes from a gun come from inside Taylor's apartment. Officer Brett Hankison told investigators looking into police actions during the March 13 raid that his fellow officers were positioned “like sitting ducks.” Hankinson said he began shooting, and the lights from gunfire inside the apartment continued, so he opened fire again through a window. He said as soon as he "returned fire through the window, the threat stopped, the gunfire stopped.” Hankison's interview with police investigators was played for a grand jury. The jury indicted the fired officer on three counts of wanton endangerment for firing into a home adjacent to Taylor's. He has pleaded not guilty.

The police officer who fired the shot that killed Breonna Taylor told investigators that that he fired four or fewer shots after he and other officers entered Taylor’s apartment on the night of March 13. The investigation later showed that Det. Myles Cosgrove actually fired 16 times. A rattled Cosgrove told investigators that he saw “vivid white flashes” amid the darkness, but that he didn’t have any sensation in his hands “or any recollection that I’m firing a gun.” He said that “due to the fact that those flashes were happening, that is why I believe there is gunfire.”

A SWAT commander told investigators looking into the police raid at Breonna Taylor's house that Officer Brett Hankison did not appear to have identified any target before he began shooting rounds. Lt. Dale Massey's interview with investigators was played for a grand jury considering whether to file charges against any of the officers involved in the botched drug raid on March 13 that ended with Taylor's death. The jury indicted Hankison on three counts of wanton endangerment for firing into an adjacent home. No one was hurt. Hankison has pleaded not guilty. Referring to Hankison, Massey said it seemed "like there was no target identification whatsoever for those rounds that were shot outside the apartment.” Det. Myles Cosgrove told investigators that one of Taylor’s neighbors was having a “hostile” yelling match with Hankinson, and that the male neighbor said something along the lines of “Leave the girl alone.”

One of the police officers who entered Breonna Taylor's apartment the night she was fatally shot said the scene was chaotic and confusing. Det. Myles Cosgrove told investigators reviewing the events of March 13 that he saw “vivid white flashes” amid the darkness. But he said he didn’t hear anything. He said he knew someone had been shot and later discovered it was a fellow officer, Sgt. Jonathan Mattingly. He also says that he knew he had fired his gun. Cosgrove also told investigators that officers had been told that they were approaching the house of a “soft target” and that they should “use our maturity as investigators get into this house.” He said that even though they had a no-knock warrant they decided to knock and announce their presence. Cosgrove's interview with investigators was included in a recording of grand jury proceedings made public Friday.

A supervisor of the firearms training program at the Louisville police department told an investigator looking into police practices the night Breonna Taylor was fatally shot that officers are not trained to “shoot suppressively” and that they should be assessing the situation as they’re shooting. In a recording of an interview that was played for the grand jury in the case, Lt. Steve Lacefield told investigators: “Our training is: shoot until there’s no longer a threat." Taylor's boyfriend fired his gun after police broke down the door of Taylor's apartment. Police then returned fire.

Breonna Taylor's boyfriend told investigators he wouldn't have opened fire if he had heard police announcing themselves before they raided her apartment. Kenneth Walker said he and Taylor had just fallen asleep when they heard banging on the door the night of March 13. Walker told investigators conducting an internal police review that Taylor asked once who was there and they heard no response. Walker told police he grabbed his gun, which he said was legally registered, and that Taylor was “yelling at the top of her lungs, and I am too at this point. No answer. No response. No nothing." Walker opened fire. He told investigators that if he had heard police announce themselves, “it changes the whole situation because there’s nothing for us to be scared of.” Walker's interview was played to the grand jury that was considering whether to file charges against officers.

Breonna Taylor’s boyfriend told investigators that, minutes after the shooting, after he opened fire at police and officers fatally shot Taylor, “One officer told me I was going to jail for the rest of my life.” Speaking to internal investigators a few hours later, he said he wasn't sure which officer said that to him. The interview was played for a grand jury in proceedings that were publicly released Friday. Walker went on to say that an officer “asked me, ’Were you hit by any bullets?' I said no. He said, ‘That’s unfortunate.' Exact words." In the audio recording of the grand jury session, someone in the room is heard saying, “That’s not appropriate.”

The NAACP Legal Defense and Educational Fund says it will conduct its own review of the grand jury audio recordings released in the Breonna Taylor case, and that it will make public its assessment of the case “in the near future.” Sherrilyn Ifill is the human rights law organization’s president and director-counsel. Ifill said in a statement Friday that “Breonna Taylor’s family, the residents of Louisville, and those across the country who have advocated for accountability for the killing of Ms. Taylor want to understand how the evidence in this case was presented to the grand jury.” Ifill said the release of these audio recordings “ is a critical first step in that process.”

A neighbor of Breonna Taylor told investigators that police told her that “some drug-dealing girl shot an officer" after officers entered Taylor's apartment on the night of March 13. An investigator for the Kentucky Attorney General's office relayed the information to a grand jury in the case. The grand jury proceedings were released publicly Friday under a court order. In fact, it was Taylor's boyfriend, Kenneth Walker, who opened fire when police entered the apartment. Police also did not find any drugs in Taylor's apartment.

The Kentucky officer indicted on minor charges in the Breonna Taylor case told a grand jury that he thought the gun Breonna Taylor's boyfriend fired when police first entered her apartment was an AR-15 rifle. Police discovered later that the weapon was a 9 mm handgun. Officer Brett Hankison said in an interview heard by the jury that he saw “intense fire” flashing through the curtain and “lighting up the room.” He said he thought that even though he was wearing his protective vest “there is no way we can challenge this guy with an assault rifle.”

The grand jury proceedings released to the public do not contain prosecutors' recommendations about what, if any, charges the jury should file against the officers who conducted the drug raid that led to Breonna Taylor's fatal shooting. In a news release Friday, Attorney General Daniel Cameron said neither the prosecutors' recommendations nor the jury's deliberations were recorded “as they are not evidence.” He said not recording them was “customary.”