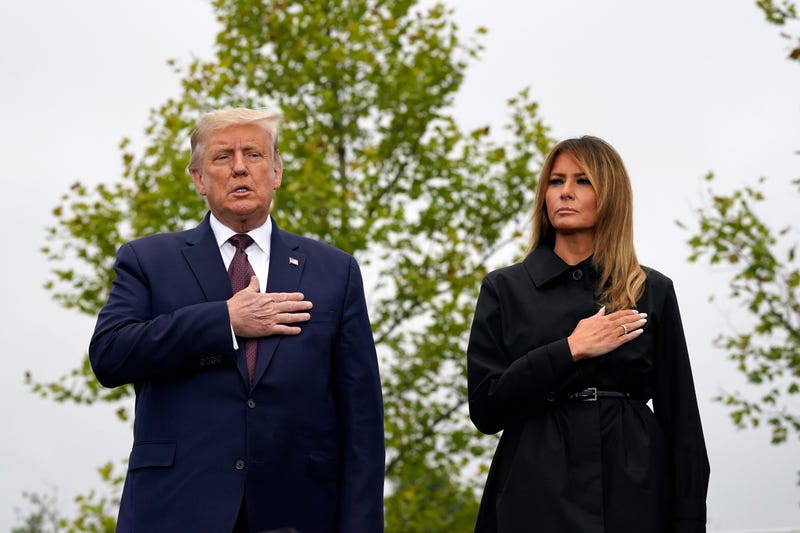 Photo credit President Donald Trump and first lady Melania Trump stand during the Pledge of Allegiance at a 19th anniversary observance of the Sept. 11 terror attacks, at the Flight 93 National Memorial in Shanksville, Pa., Friday, Sept. 11, 2020. (AP Photo/Alex Brandon)
By The Associated Press

SHANKSVILLE, Pa. — President Donald Trump marked the 19th anniversary of the Sept. 11 terror attacks on Friday with a patriotic message for the world: “No matter the threat. No matter the odds. America will always rise up, stand tall and fight back.”

Trump delivered a sobering speech in rural Shanksville, Pennsylvania where Flight 93, hijacked by terrorists, crashed in a field, killing all 40 aboard. Former Vice President Joe Biden is to visit Shanksville later Friday after attending the 9/11 Memorial & Museum’s annual commemoration at ground zero in New York.

Trump paid tribute to the nearly 3,000 people who died in Shanksville, New York and at the Pentagon.

“To the family members of Flight 93, today every heartbeat in America is wedded to yours,” Trump said. “Your pain and anguish is the shared grief of our whole nation. ... While we cannot erase your pain, we can help to shoulder your burden.”

Trump also noted that America came together after 9/11.

“It was a unity based on love for our families, care for our neighbors, loyalty to our fellow citizens, pride in our great flag, gratitude for our police and first responders, faith in God and a refusal to bend our will to the depraved forces of violence, intimidation, oppression and evil."

NEW YORK — At the World Trade Center memorial plaza, Michael Brady said he wasn’t going to let the coronavirus deter him from honoring his brother this year.

Brady’s brother, David, had a breakfast meeting on 9/11 atop one of the fallen towers.

This year’s scaled-down ceremony includes a recorded roll call of victims instead of the usual custom of family members reading them aloud. Michael Brady said that’s OK with him and his family.

“We just want to hear his name,” said Brady, who has been a name reader at past 9/11 ceremonies.

The Wyckoff, New Jersey resident said his brother, who had four children under nine when he died, was the focal point of the family. He is still desperately missed.

“When you come every year you see a lot of the same faces,” he said “We still get the same text messages from the same people every year thinking about David, and no, people don’t forget at all.”

SHANKSVILLE, Pa. — In a speech marking the Sept. 11 attacks on America, President Donald Trump said that the victims will forever be a reminder that “no matter the threat, no matter the odds, America will always rise up, stand tall and fight back.”

Trump is delivering a sobering, patriotic speech in rural Shanksville, Pennsylvania where Flight 93, hijacked by terrorists, crashed in a field, killing all 40 on board.

Trump said that during the attacks, which killed nearly 3,000 people in Shanksville, New York and at the Pentagon, the world witnessed American courage and sacrifice. He is honoring first responders and said that the “deadly strike at the heart of American democracy was the courage and resolve of 40 men and women – the amazing passengers and crew of Flight 93.”

SHANKSVILLE, Pa. — President Donald Trump and first lady Melania Trump are attending the ceremony to remember the 40 passengers and crew who died after terrorists commandeered Flight 93 on Sept. 11, 2001.

The Flight 93 National Memorial near Shanksville in western Pennsylvania marks the spot where the plane crashed in a rural area at 10:03 a.m.

Before stepping off the plane, the president and Melania Trump observed a moment of silence at 8:46 a.m., marking the time the first plane hit the World Trade Center 19 years ago.