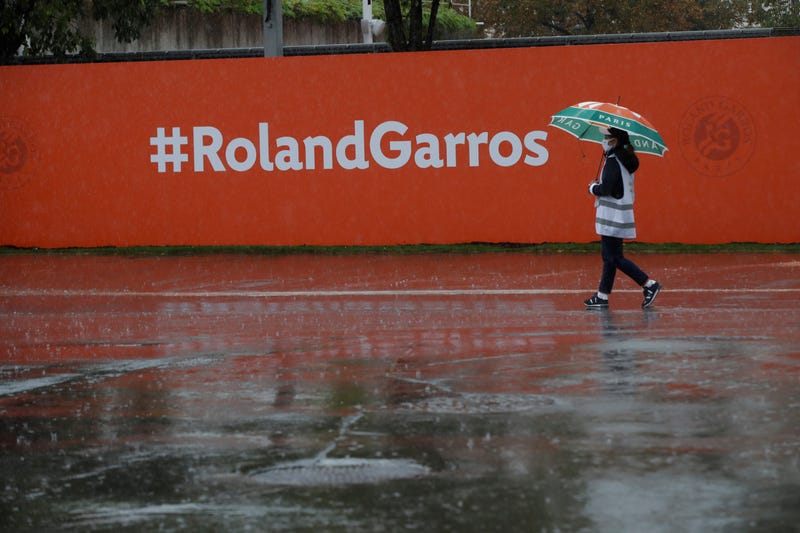 The French Open's investment in the new roof over Court Philippe Chatrier is paying off again amid more rain.

Chatrier is the only arena at Roland Garros staying dry in a deluge that has stopped play on outside courts.

Rain pounding the clay-court Grand Slam tournament have sent spectators scurrying for shelter. The third-round match between Elise Mertens and Caroline Garcia on Chatrier is the only one that hasn't been suspended. The 16th-seeded Mertens took the first set 6-1. The retractable roof has been closed over the court since the start of play.

All the other courts are covered with tarpaulins to stop the ochre surfaces of crushed brick dust from becoming soaked.

Simona Halep had no trouble reversing the result of her loss to Amanda Anisimova at last year’s French Open.

The top-seeded Halep extended her winning streak to a career-best 17 matches as she seeks a third Grand Slam title.

She won the trophy at Roland Garros in 2018.

Anisimova upset Halep in straight sets in the quarterfinals in Paris in 2019.

But this one went Halep’s way from the start thanks in part to the 19-year-old Anisimova’s inability to put her shots where she wanted.

U.S. Open champion Dominic Thiem advanced to the fourth round with another straight-sets win. He beat Casper Ruud of Norway 6-4, 6-3, 6-1.

Thiem was the losing finalist to Rafael Nadal at the last two French Opens.

Ruud was bidding to become only the second Norwegian to reach the fourth round of a Grand Slam. The first was his father at the Australian Open in 1997.

Christian Ruud now coaches his son and was watching in the largely empty Court Philippe Chatrier as Thiem earned a straightforward victory in 2 hours, 15 minutes under the new roof.

Thiem sealed the win with an ace. The 27-year-old Austrian was broken just once when he sent a forehand wide to give Ruud a 3-1 lead in the first set.

Thiem immediately broke back and converted six of his 15 break points in all. He also saved seven of the eight break points he faced.

Polish teenager Iga Swiatek advanced to the fourth round of the French Open for the second consecutive year with a 6-3, 6-2 win over Canadian wild-card entry Eugenie Bouchard.

The 19-year-old Swiatek has lost only 13 games so far at Roland Garros and not dropped a set. She opened her campaign with a first-round upset of 2019 French Open finalist Marketa Vondrousova.

Swiatek hit 30 winners and converted six of her 13 break points against the 168th-ranked and 2014 Wimbledon finalist Bouchard.

Swiatek is the daughter of a former Olympic rower. Tomasz Swiatek rowed in the quadruple sculls at the 1988 Seoul Olympics.

music
Johnny Rotten admits to flea bites on 'my willy' from allowing squirrels inside his home
music
Billie Joe Armstrong of Green Day: 'Donald Trump is holding half of the country hostage'
music
Will The Weeknd be bandaged during his Super Bowl Halftime performance?
music
Guitar Center explains why they filed for Chapter 11 bankruptcy
sports
Pirates' Cole Tucker appears to be dating High School Musical Star Vanessa Hudgens
sports
Jason Garrett could be next Giants coach to go: report