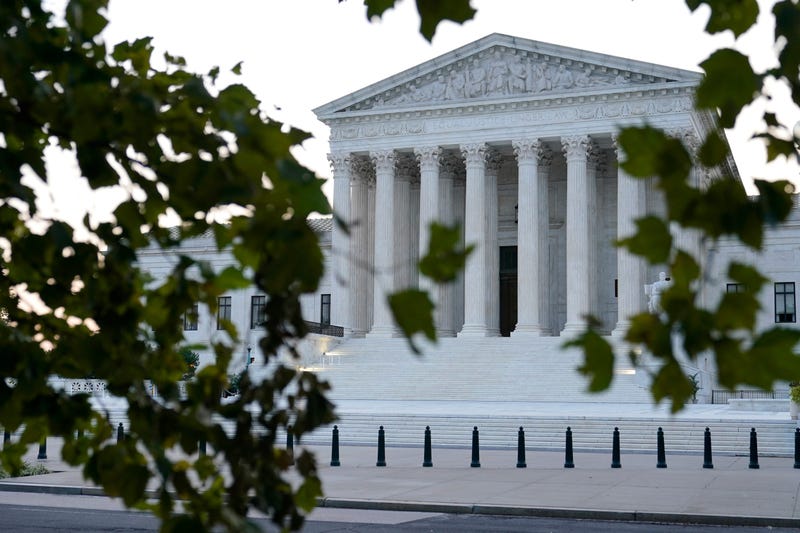 Photo credit The sun rises behind the Supreme Court in Washington, Wednesday, Sept. 23, 2020, before a private ceremony and public viewing of Justice Ruth Bader Ginsburg. Ginsburg, 87, died of cancer on Sept. 18. (AP Photo/Patrick Semansky)
By The Associated Press

WASHINGTON (AP) — The Latest on the Supreme Court and the death of Justice Ruth Bader Ginsburg (all times local):

Trump went so far as to suggest on Wednesday that the Senate Judiciary Committee “doesn’t even have to hold a hearing,” though he added that he expects that Republican chair Lindsey Graham will go ahead and schedule confirmation hearings anyway.

Trump told reporters at the White House that many of the candidates on his short list of five women have already gone through confirmation hearings during his presidency. He says, “So it’s not like, ‘Gee, let’s look at papers that are 15 years old.’ No, I think the process is going to go very quickly.”

Trump is expected to announce his choice at 5 p.m. Saturday, but he says most Republican senators have made their intentions very clear on a final vote, adding, “I think we’re in great shape."

Ginsburg, a liberal justice, died Friday at the age of 87.

Joe Biden won't say if he is vetting a list of potential Supreme Court picks. But he says Democrats should be campaigning on the issue as voters get ready to make their choice this November.

He told reporters Wednesday that Democrats should “go to the American people, make the case why this is a gigantic mistake and abuse of power.”

He said if there were another conservative justice on the court, the Affordable Care Act could be overturned and healthcare cost protections for women could be eliminated.

Biden has said he won’t release a list to avoid giving Trump and Republicans an opportunity to attack him and his potential picks. Trump has had a running list of picks since the 2016 campaign.

Biden made the comments on a tarmac before boarding a plane to North Carolina.

The casket of the late Justice Ruth Bader Ginsburg has been moved to the top of the Supreme Court’s marble steps so the public can pay respect.

A brief, private ceremony honoring Ginsburg in the court’s Great Hall began the mourning period on Wednesday. Normally, members of the public would have been allowed to pass through the Great Hall. But because of the coronavirus pandemic the casket was moved outside so the public can pay their respects while following public health guidance.

Mourners were already waiting in line hours before. Some drove from several states away in order to be present to pay their respects to the late justice, a champion of women’s rights and gender equality.

Chief Justice John Roberts is remembering his colleague Justice Ruth Bader Ginsburg as tough and brave, a fighter and a winner.

Roberts was speaking Wednesday during a private ceremony honoring Ginsburg in the court’s Great Hall. He said she was also careful, compassionate and honest. He spoke of her undying devotion to the law and to her family.

Roberts said Ginsburg’s opinions and her famous dissents will steer the court for decades. He says they are written with the “unaffected grace of precision.”

“The voice in court and in our conference room was soft. But when she spoke, people listened," Roberts said.

The death of Justice Ruth Bader Ginsburg is bringing together the court’s remaining eight justices for the first time since the Supreme Court building was closed in March and they resorted to meetings by telephone.

All eight justices were present Wednesday for a private ceremony honoring Ginsburg in the court’s Great Hall. Ginsburg died Friday at the age of 87.

All of the eight justices were wearing masks during the indoor ceremony because of the coronavirus pandemic.

Retired Justice Anthony Kennedy was also present, along with Maureen Scalia, the widow of Antonin Scalia who died in 2016 and was closest to Ginsburg on the court.

Ginsburg was a champion of gender equality and women’s rights. Outside the court, hundreds of mourners stood to pay their respects, silent save for the clicks of cell phone cameras, and watched as pallbearers carried Ginsburg’s flag-draped coffin up the courthouse steps.

The White House says President Donald Trump will pay his respects to the late Justice Ruth Bader Ginsburg on Thursday at the Supreme Court.

The casket of the second woman to serve on the nation’s high court will be placed atop the Supreme Court building’s steps after a private ceremony Wednesday for people to pay their respects during the coronavirus pandemic. She will lie in repose at the court for two days before her casket is moved to the Capitol.

Trump has said Ginsburg was an “amazing woman” who led an “amazing life.” He is moving quickly to name her successor, with an announcement set for Saturday.

Ginsburg was a women’s rights champion, leader of the court’s liberal bloc and a feminist icon who died Friday of cancer. She was 87.

Clerks of the court wearing black masks filed down the steps as the casket arrived.

Following a private ceremony in the court’s Great Hall, the casket will be moved to the top of the court's front steps so that members of the public can pay their respects in line with public health guidance for the coronavirus pandemic.

Thousands are expected to pay their respects.

Ginsburg, the second woman to serve on the court after Sandra Day O'Connor, died Friday at 87 from metastatic pancreatic cancer.