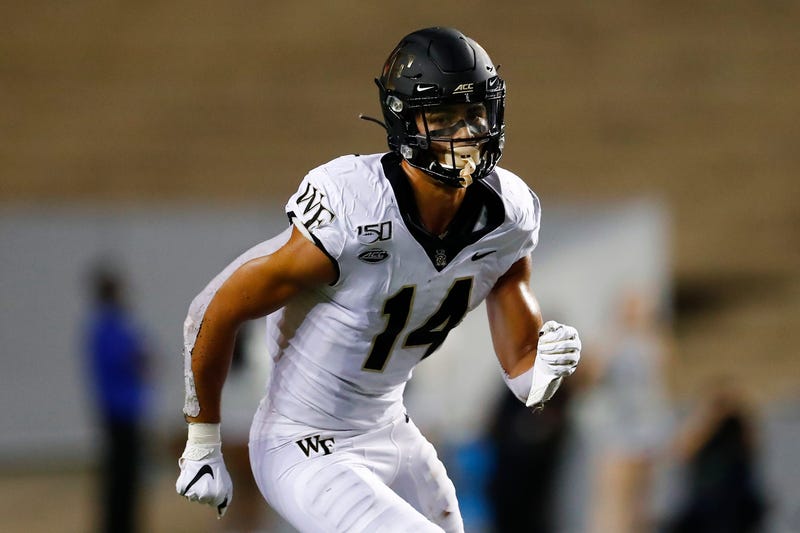 Photo credit FILE - In this Sept. 6, 2019, file photo, Wake Forest wide receiver Sage Surratt (14) runs a pass route during an NCAA football game in Houston. Wake Forest all-conference wide receiver Sage Surratt has opted out of the coming season to prepare for the NFL draft amid the coronavirus pandemic. Surratt announced his decision on social media and cited “the many uncertainties and risks associated with COVID-19.”(AP Photo/Matt Patterson, File)
By The Associated Press

North Carolina has immediately suspended athletics activities for all sports teams for at least 24 hours due to a “continued upward trend in positive COVID-19 tests on campus.”

In Wednesday’s announcement, the school said the pause would last until at least 5 p.m. Thursday. That came two days after UNC canceled in-person undergraduate classes in favor of remote instruction.

The move includes the closure of campus recreation facilities, though dining halls and libraries will remain open in limited capacity.

In a statement, athletics director Bubba Cunningham said school officials “want to make sure we continue to do everything we can to ensure that that our teams, campus and community remain healthy.‘’

Athletes will have continued access to services such as academic support and medical care.

The decision to switch to remote instruction was made after four coronavirus clusters in student housing and a fraternity surfaced in the past week. The school plans to allow athletes, international students, ROTC students and students with hardships such as the lack of online access at home to remain in campus housing if they choose.

Notre Dame canceled its Wednesday football practice and might take Thursday off as well in response to the school’s decision to go to online classes because of a coronavirus outbreak on campus.

The Rev. John Jenkins, the Notre Dame president, announced in-person undergraduate classes would be canceled through Sept. 2. About 150 students have tested positive.

Notre Dame is imposing restrictions on student activity, including limiting access to dormitories to residents and barring students from major gathering places on campus.

The Fighting Irish football program announced last week there have been four positive test results for COVID-19 out of 619 tests done since players returned to campus in June.

Wake Forest all-conference wide receiver Sage Surratt has opted out of the coming season to prepare for the NFL draft amid the coronavirus pandemic.

Surratt announced his decision Wednesday on social media, citing “the many uncertainties and risks associated with COVID-19.” Surratt said he’s set to earn an economics degree in December, saying the school in Winston-Salem, North Carolina, has “forever transformed my life.”

“My experience at Wake Forest has been extraordinary, and I leave with a humble and grateful heart,” Surratt said.

The 6-foot-3, 215-pound redshirt junior made The Associated Press’ All-Atlantic Coast Conference first team last season after hauling in 66 catches for 1,001 yards and 11 touchdowns in nine games before going down with an injury. The 1,001 yards were the best for all power-conference receivers at the time of the injury, with four games of at least 150 yards last season.

Surratt’s brother, Chazz, plays linebacker at North Carolina after starting his career as a quarterback and is also an NFL prospect.

The decision announced Tuesday night comes after there were active cases reported for seven students and four staffers. The school said health officials have instructed the individuals to isolate while recovering, while those in close contact with the active cases have been instructed to quarantine.

The largest 10-kilometer road race in the United States will be run virtually in 2020.

The Peachtree Road Race in Atlanta, which has been held on the Fourth of July since its inaugural event in 1970, shifted to a Thanksgiving date in hopes of staging the race during the coronavirus pandemic. It normally attracts some 60,000 runners.

But the Atlanta Track Club now says the race will not be run down the city’s famed Peachtree Street because of safety concerns. Georgia has been one of the nation’s hardest-hit states during the pandemic, recording nearly 250,000 confirmed cases and more than 4,700 deaths.

“As coronavirus has spiked in recent weeks here in Georgia, we recognize that this decision is the best and only responsible way forward,” executive director Rich Kenah said in a statement.

The track club now plans a virtual event that will allow runners to experience some of the race’s traditions and compare their times with others who take part.

The Georgia Bulldogs are planning to have some fans for their football games played between the hedges.

The university announced ticket plans that call for allowing 20 to 25% capacity at 92,746-seat Sanford Stadium, where the field is surrounded by hedges. That would mean maximum crowds of between 18,500 and 23,000 for Georgia’s four home games in 2020.

The Bulldogs are offering single-game tickets in hopes of accommodating as many season ticket holders as possible for games against Auburn, Tennessee, Mississippi State and Vanderbilt.

The school says those who choose not to attend games this fall will be eligible for a refund on all donations and season ticket purchases, while retaining their preferred status for 2021.

Roma goalkeeper Antonio Mirante says he has the coronavirus but is currently asymptomatic.

The 37-year-old Mirante says in a video on Instagram that he has tested positive for COVID-19 and is in isolation.

He says “I feel well, I have no symptoms, neither a fever nor a cough.”

The news comes a day after Roma announced that two of its youth team players had tested positive for the virus.