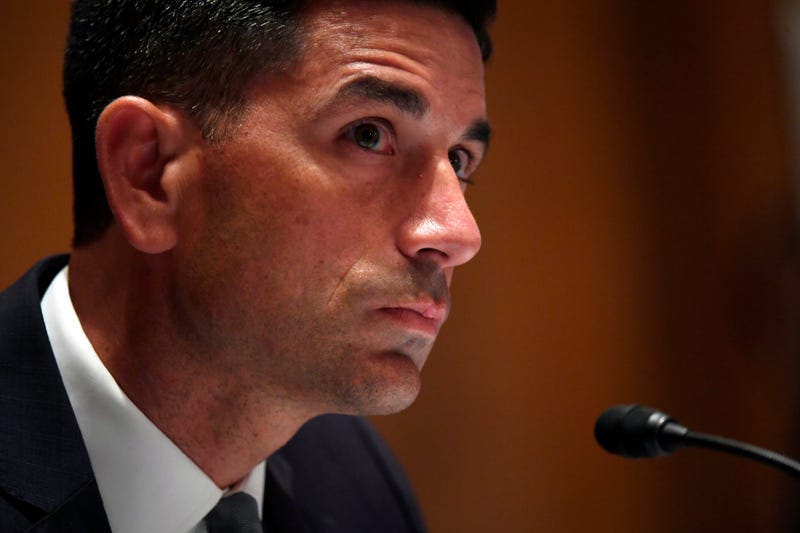 WASHINGTON (AP) — President Donald Trump said Tuesday he will nominate acting Secretary of Homeland Security Chad Wolf for the top spot in the agency, rewarding a forceful advocate for administration policy whose leadership has been challenged on legal grounds.

The president made the announcement on Twitter. He praised Wolf's management of an agency that has been key to implementing Trump administration policies on immigration and crime, which critics say detracts from the core DHS mission of protecting the nation from external threats.

“I am pleased to inform the American Public that Acting Secretary Chad Wolf will be nominated to be the Secretary of Homeland Security,” Trump tweeted. “Chad has done an outstanding job and we greatly appreciate his service!”

Wolf's prospects for Senate confirmation are unclear. There is a narrow window for him to be confirmed before the Nov. 3 election, with the Senate away until Labor Day and then scheduled to recess in mid-October.

He's likely to face criticism over DHS involvement in administration efforts to limit both legal and illegal immigration as well as the deployment of federal agents in tactical gear to confront protesters this summer in Portland, Oregon, without the agreement of state and local authorities.

“I think given his past actions, he’s an awful choice," Sen. Chuck Schumer, the Senate's top Democrat, said in a call with reporters.

Sen. Gary Peters, a member of the Senate's Homeland Security Committee, said the agency needs “qualified, principled leaders” as it faces the coronavirus pandemic and threats to election security.

“Given Acting Secretary Wolf’s record since assuming his role, I have serious questions and concerns about his suitability for the job,” the Michigan Democrat said.

Wolf's position of acting secretary has already been the subject of legal challenges. He has been in what is supposed to be a temporary role for over 500 days, more than twice as long as permitted under the federal law intended to limit the length of time someone can hold a position in the government without Senate confirmation.

Wolf was named acting secretary in November 2019 following Trump's removal of his predecessor, acting Secretary Kevin McAleenan, after six months leading the agency that has the third largest budget in the federal government.

“He has demonstrated his absolute loyalty to the president and his willingness to do everything the president wants," said John Sandweg, the agency’s former acting general counsel. “That triggered enough trust to nominate him.”

The Government Accountability Office said in a finding released Aug. 14 that the federal rules of succession had been violated at DHS and neither Wolf nor acting Deputy Secretary Ken Cuccinelli could legally hold their positions.

That gave new ammunition to the many legal challenges of administration immigration policies. DHS has disputed the GAO finding and says both men can legally hold their positions under a different federal statute, the Homeland Security Act.

The administration may have felt compelled to nominate Wolf in an attempt to avoid jeopardizing any actions, such as the issuance of immigration regulations, that are legally reserved for the secretary, said Sandweg, now an attorney who specializes in immigration and national security.

“The GAO opinion creates a sense of urgency that they probably need to legitimize his position,” he said.

Homeland Security, which was created in response to the Sept. 11, 2001, terrorist attacks, has more than 240,000 employees. It includes U.S. Customs and Border Protection as well as the agency that processes applications for citizenship and work visas. It also manages disaster relief, counter-terrorism, election security and the Coast Guard.

Wolf has defended the decision to use DHS to protect federal property and monuments following the protests that erupted around the nation this spring over the police killing of George Floyd in Minneapolis. That included the deployment of federal agents to Portland, where they clashed repeatedly with protesters and whisked several people off the streets and into unmarked vehicles without identifying themselves.

Wolf said that DHS was compelled to take action against what he called “lawless anarchists” because an inadequate local response had “emboldened the violent mob as it escalates violence day after day.”

Wolf earlier served as chief of staff under former Secretary Kirstjen Nielsen when a “zero tolerance” policy on illegal immigration at the southern border resulted in the separation of thousands of parents, mostly from Central America, from their children.

“I am honored to be nominated by President Trump to lead the men and women of the Department of Homeland Security in safeguarding the American people,” he said in a statement after the president announced his nomination to be secretary. “As the homeland faces evolving threats from natural disasters, violent opportunists, malign cyber actors, and transnational criminal organizations, the mission of DHS is as critical as ever.”