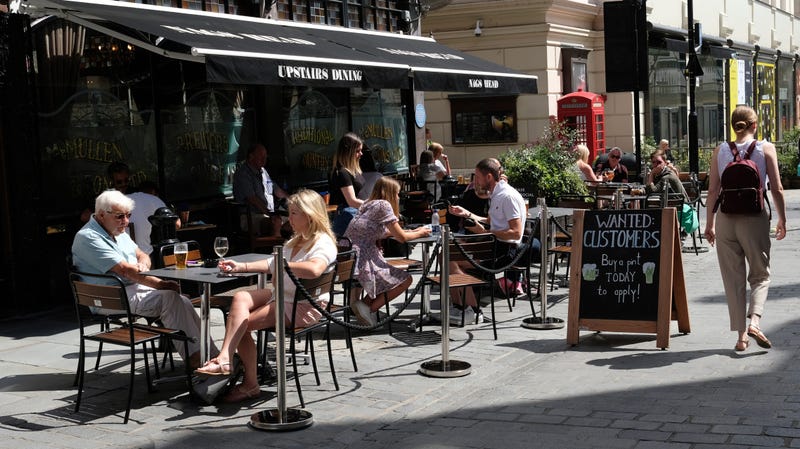 Photo credit FILE - In this Monday, Aug. 3, 2020 file photo, a sign outside a pub reads: "Wanted Customers" in central London. The British economy recouped some further lost ground during July after a swath of coronavirus restrictions were lifted, official figures showed Friday Sept. 11, 2020. However, it still has to make up around half the output lost at the peak of the lockdown and now faces renewed risks related to Brexit. (AP Photo/Alastair Grant, file)
By The Associated Press

LONDON (AP) — The U.K. secured its first major post-Brexit trade deal on Friday after signing an agreement with Japan just as discussions with the European Union appeared to be teetering on the brink of collapse.

The deal, which has so far only been agreed upon in principle and for which details are thin, will increase commerce with Japan by around 15 billion pounds ($19 billion), the U.K. said.

“The agreement we have negotiated — in record time and in challenging circumstances — goes far beyond the existing EU deal, as it secures new wins for British businesses in our great manufacturing, food and drink, and tech industries," said Britain's international trade secretary, Liz Truss, who pointed to concessions on English sparkling wine and Wensleydale cheese.

The government said U.K. businesses will benefit from tariff-free trade on 99% of exports to Japan and that it will give British businesses a gateway to the Asia-Pacific region. Overall, it said the deal with Japan, the world's third-largest economy, will deliver a 1.5 billion-pound boost to the U.K.

Britain's Conservative government has said that one of the benefits of Brexit is that it allows the country to negotiate trade deals with whoever it wishes — the EU negotiates trade deals on behalf of its members.

Skeptics say nothing can mitigate for the losses Britain would suffer in the event of a ‘no-deal’ outcome with the EU. Such a scenario would see tariffs and other impediments imposed on trade between the U.K. and the EU. Though both sides would suffer from the new barriers to trade, most economists think Britain would be hit disproportionately.

They point to the U.K.'s existing trade arrangements to argue that a ‘no-deal’ would be catastrophic. In 2019, the U.K. exported some 36.7 billion pounds of goods to Germany, Europe's largest-economy, or 10% of its total. Exports to Japan were just 7.2 billion pounds, or 1.9% of the total.

The talks with the EU have not collapsed yet and discussions are set to resume on Monday in Brussels. Though the U.K. left the bloc on Jan. 31, it is in a transition period that effectively sees it benefit from tariff-free trade until the end of this year. The discussions are about agreeing on the broad outlines of the trading relationship from the start of 2021.

Concerns over a post-Brexit deal have heightened in the past few days since the British government said that new legislation breaches parts of the withdrawal agreement, which allowed for the country’s smooth departure from the bloc.

The diplomatic shockwaves from the British announcement could derail any hopes Prime Minister Boris Johnson may have of negotiating a U.S. trade deal. The House of Representatives speaker, Nancy Pelosi, warned the British government that there will be “absolutely no chance” of a trade deal if the U.K. violates its international obligations as they apply to the peace process in Northern Ireland. Congress has to ratify all U.S. trade deals.

Even before the current standoff, the trade discussions with the EU had made little progress, with the two sides wide apart on business regulations, the extent to which the U.K. can support certain industries and over the EU fishing fleet’s access to British waters.

The renewed Brexit uncertainties come as the British economy gradually recovers from a deep recession caused by the shutdown of businesses during the coronavirus pandemic. The Office for National Statistics said the economy grew by a month-on-month rate of 6.6% in July as many sectors, including pubs and restaurants, started reopening. Despite the increase, the economy remains 11.7% smaller than it was in February.

The looming end of a salary-support scheme that will likely see unemployment rise and the heightened Brexit uncertainties are expected to weigh on growth in the months ahead.

Former Labour prime minister, Gordon Brown, urged the government to provide more support for those likely to be unemployed after the end of the Job Retention Scheme in October and to avoid a “huge act of self-harm” in its discussions with the EU.