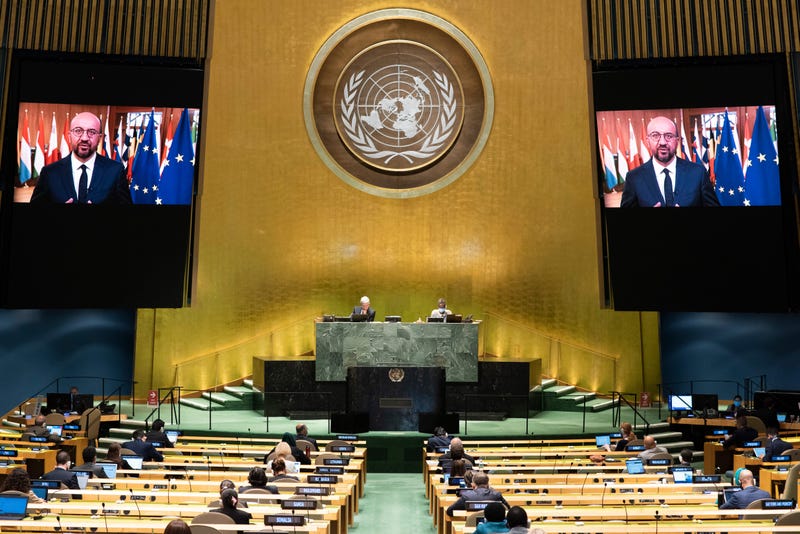 Photo credit In this photo provided by the United Nations, European Council President Charles Michel speaks in a pre-recorded message which was played during the 75th session of the United Nations General Assembly, Friday, Sept. 25, 2020. (Evan Schneider/UN Photo via AP)
By The Associated Press

PARIS (AP) — Struggling to contain resurgent virus infections, European leaders decried a collective failure to vanquish the pandemic and told the U.N. General Assembly on Friday that the time has come for countries to reinvent international cooperation.

This year’s unusual work-from-home General Assembly — with leaders communicating only in prerecorded speeches — comes as COVID-19 cases escalate in many regions but especially in Europe, where some of the world's most advanced hospitals in some of the world’s richest countries are again under strain.

The pandemic “has also revealed the fragility of countries that thought they were strong. It has thrown us all into the same sudden battle, against the same common enemy,” EU Council President Charles Michel said.

And it has exposed weaknesses within the European Union, which like the U.N. was founded on the ashes of World War II to avert new conflict and encourage cooperation — cooperation that was in short supply this year. The EU has fought internally about access to equipment and vaccines, erected barriers among neighbors to keep out virus infections, and struggled to agree on collective solutions to fight COVID.

Italy’s prime minister, whose country became a global symbol of the crisis as the first in the West to face a vast wave of infections, said the pandemic should offer world governments “the opportunity for collective renewal.”

“This tragedy has changed us, but has also offered us the opportunity for a new beginning that is up to us to seize. After these months of suffering, we look each other in the eye differently, calling on a new sense of reciprocity and renewed spirit of solidarity," Giuseppe Conte said.

Worldwide, the confirmed COVID-19 death toll is nearing 1 million, though experts believe the real toll is likely higher. In times of global crisis, Europe’s rich governments are often looked to for financial and material aid for poorer ones. But this time, they’re preoccupied with troubles of their own.

As infections tick up, EU countries are again imposing quarantines on visitors from neighboring nations. Britain and Spain are imposing local lockdowns, the French Open is curtailing access, and COVID intensive care units in the Mediterranean city of Marseille are reaching saturation.

Meanwhile the pandemic has damaged the whole concept of multilateralism that European leaders have long embraced.

“Europe will have to redefine its role in the world,” Czech Prime Minister Andrej Babiš told the assembly.

He criticized the World Health Organization, while others called for boosting its powers and its funding. Greece’s prime minister appealed for more international help for its migrant crisis after feeling abandoned by fellow EU countries that closed their doors to refugees washing up on Greek shores.

And EU Council President Charles Michel used the virtual U.N. pulpit to lash out at Britain for its threats to renege on parts of the Brexit treaty it signed with the EU. Such treaties are seen as a cornerstone of the international system that the U.N. represents, and Britain's threats are seen as a further unraveling of that structure in a time of growing nationalism worldwide.

Pope Francis said the world has a choice to make as it tries to emerge from the COVID-19 crisis and address the grave economic impact it has had on the planet’s most vulnerable: greater solidarity and multilateralism, or a self-retreat into greater “individualism and elitism.”

Echoing many speakers at this week's virtual gathering, the Dutch leader said the pandemic should be a wake-up call for the world and the U.N. itself.

“If we’re truly going to defeat this virus we’ll have to do even more to enhance international cooperation,” Dutch Prime Minister Mark Rutte said. “We can’t tackle today’s challenges with yesterday’s structures.”

Other leaders lamented growth of international cyber attacks, disinformation and used the U.N. virtual floor to call attention to conflicts from Kashmir to the Mideast to Georgia in the Caucasus. Palestinian President Mahmoud Abbas on Friday called for an international conference next year to launch a “genuine peace process” for the Mideast.