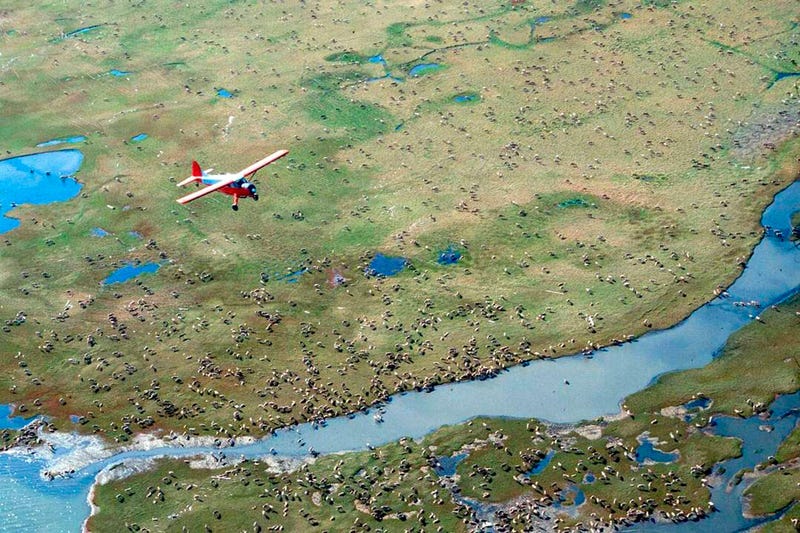 Photo credit FILE - In this undated photo provided by the U.S. Fish and Wildlife Service, an airplane flies over caribou from the Porcupine Caribou Herd on the coastal plain of the Arctic National Wildlife Refuge in northeast Alaska.The Department of the Interior has approved an oil and gas leasing program within Alaska’s Arctic National Wildlife Refuge. The refuge is home to polar bears, caribou and other wildlife. Secretary of the Interior David Bernhardt signed the Record of Decision, which will determine where oil and gas leasing will take place in the refuge’s coastal plain. (U.S. Fish and Wildlife Service via AP)
By The Associated Press

ANCHORAGE, Alaska (AP) — The Trump administration gave final approval Monday for a contentious oil and gas leasing plan on the coastal plain of Alaska's Arctic National Wildlife Refuge, where critics worry about the industry's impact on polar bears, caribou and other wildlife.

The next step, barring lawsuits, will be the actual sale of leases. Development — should it occur — is still years away.

Environmentalists have promised to fight opening up the coastal plain, a 1.56-million acre swath of land along Alaska’s northern Beaufort Sea coast after the Department of the Interior approved an oil and gas leasing program.

Secretary of the Interior David Bernhardt signed the Record of Decision, which will determine a program for where oil and gas leasing will take place.

“The establishment of this program marks a new chapter in American energy independence,” Bernhardt said during a conference call with reporters.

“Years of inaction have given away to an informed and determined plan to responsibly tap ANWR’s energy potential for the American people for generations to come,” he said.

Over the past four decades, Republicans have attempted to open the refuge to drilling. President Bill Clinton vetoed a Republican bill to allow drilling in 1995, and Democrats blocked a similar plan 10 years later. President Trump insisted Congress include a mandate providing for leasing in the refuge in a 2017 tax bill.

The Interior’s Bureau of Land Management in December 2018 concluded drilling could be conducted within the coastal plain area without harming wildlife.

The Republican governor called the decision “a definitive step in the right direction to developing this area’s energy potential,” which he estimated at 4.3 and 11.8 billion barrels of recoverable oil reserves.

Republican U.S. Sen. Lisa Murkowski said the opportunity offered by opening the coastal plain “is needed both now, as Alaskans navigate incredibly challenging times, and well into the future as we seek a lasting economic foundation for our state.

"Through this program, we will build on our already-strong record of an increasingly minimal footprint for responsible resource development.”

Trump in 2018 said he hadn't felt strongly about opening the refuge, but had insisted it be included in the tax bill at the urging of others. He also said a friend told him that every Republican president since Ronald Reagan had tried and failed to open the refuge to drilling.

“I really didn’t care about it, and then when I heard that everybody wanted it — for 40 years, they’ve been trying to get it approved, and I said, ‘Make sure you don’t lose ANWR,’” Trump said at the time.

“His plan released last year made clear that he will permanently protect ANWR and other areas impacted by President Trump’s attacks on federal lands and waters,” campaign spokesperson Matt Hill said.

“The Trump administration’s so-called review process for their shameless sell-off of the Arctic refuge has been a sham from the start. We’ll see them in court,” said Lena Moffitt with the Our Wild America campaign of the Sierra Club.

“This administration has done nothing but disrespect the Indigenous peoples that have occupied these lands,” Gwich’in Steering Committee Executive Director Bernadette Demientieff said.

The coastal plain is calving grounds for the Porcupine Caribou Herd, which includes about 200,000 animals, “Our ways of life, our food security, and our identity is not up for negotiation. The fight is not over," she said.

“The environmental analysis underpinning this decision is so laughably indefensible that either the courts or a future presidential administration will have no trouble tossing it in the dustbin of history,” Lee-Ashely said.

“The industry has a well-established record of safe and environmentally responsible development of Alaska’s energy resources and has been recognized for its success in being respectful of Alaska’s wildlife and surrounding communities,” he said. “Advancements in technology and commitments to environmental stewardship – including for over 50 years in Alaska’s Arctic – have enabled America’s oil and natural gas industry to safely meet decades of demand for affordable, reliable and cleaner energy.”

Bernhardt said the program should stand up to legal challenges or the whims of future presidential administrations.

“Congress has mandated these lease sales, and so they have to go forward in some regard. They can’t just simply unduly delay, so that is a reality that Congress created,” he said. "And really, absent a change in the law, the question of whether or not there will be a program in ANWR has really been answered.”

The decision makes the entire coastal plain — 8% of the 19.3-million-acre refuge — available for oil and gas leasing and potential development. The Department of the Interior said the plan includes protections for habitat and wildlife, including operational time limits on 585,400 acres.