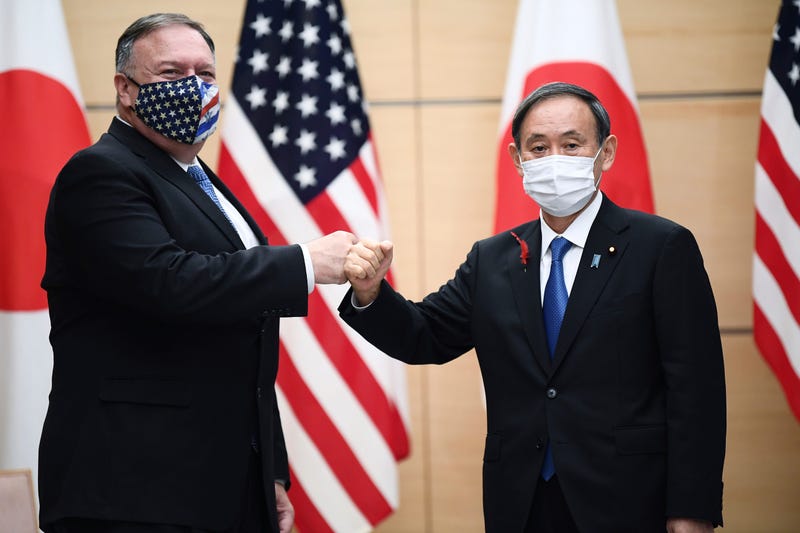 TOKYO (AP) — U.S. Secretary of State Mike Pompeo said Tuesday that China's increasingly assertive actions across the region make it more critical then ever for the four Indo-Pacific nations known as the Quad to cooperate to protect their partners and their people from Chinese “exploitation, corruption and coercion.”

Pompeo made the remark at a meeting in Tokyo with the foreign ministers of Japan, India and Australia, who together make up the Quad. The talks were the group's first in-person since the coronavirus pandemic began.

Pompeo accused China of covering up the pandemic and worsening it, while threatening freedom, democracy and diversity in the region with its increasingly assertive actions.

"It is more critical now than ever that we collaborate to protect our people and partners from the Chinese Communist Party's exploitation, corruption and coercion,” Pompeo said. “We see in the East and South China Seas. The Mekong, the Himalayas, the Taiwan Strait. These are just a few examples.”

The talks come less than a month before the U.S. presidential election and amid tensions between the Washington and Beijing over the virus, trade, technology, Hong Kong, Taiwan and human rights. They follow a recent flareup in tensions between China and India over their disputed Himalayan border, while relations between Australia and China have also deteriorated in recent months.

Japan, meanwhile, is concerned about China’s claim to the Japanese-controlled Senkaku Islands, called Diaoyu in China, in the East China Sea. Japan also considers China’s growing military activity to be a security threat. Japan’s annual defense policy paper in July accused China of unilaterally changing the status quo in the South China Sea, where it has built and militarized manmade islands and is assertively pressing its claim to virtually all of the sea’s key fisheries and waterways.

Earlier Tuesday, Japan's new Prime Minister Yoshihide Suga said at a meeting with the Quad diplomats that their “Free and Open Indo-Pacific” security and economic initiative is more important than ever amid challenges from the coronavirus pandemic.

The international community faces multiple challenges as it tries to resolve the pandemic, and “this is exactly why right now it is time that we should further deepen coordination with as many countries as possible that share our vision,” Suga said.

Suga took office on Sept. 16, vowing to carry on predecessor Shinzo Abe’s hawkish security and diplomatic stance. Abe was a key driving force behind promoting the FOIP initiative, which Suga called “a vision of peace and prosperity of this region” and pledged to pursue.

Japan and the U.S. have been pushing the FOIP as a way to bring together “like-minded” countries that share concerns about China’s growing assertiveness and influence.

Pompeo earlier met one on one with his three counterparts, meetings in which according to the State Department he shared their concerns about China's increasing influence in the region, while reaffirming the importance of cooperation among those sharing the concerns.

Pompeo in his talks with Payne shared concerns about “China’s malign activity in the region,” while agreeing on the importance for the Quad discussions to “the promotion of peace, security and prosperity in the Indo-Pacific,” according to the State Department.

Motegi held a working lunch session with Pompeo in which the Japanese minister said he expressed hope that Japan and the U.S. will lead the international community to achieve the FOIP.

Pompeo is attending the Quad meeting, though he canceled subsequent planned visits to South Korea and Mongolia after President Donald Trump was hospitalized with COVID-19. The president was released Monday and returned to the White House.

Suga, who had been chief Cabinet secretary under Abe, told Japanese media on Monday that he will pursue diplomacy based on the Japan-U.S. alliance as a cornerstone and “strategically promote the FOIP,” while establishing stable relations with neighbors including China and Russia.

He said he also plans to promote the FOIP during a planned visit to Southeast Asia later this month.

Japan sees the FOIP as crucial to have access to sea lanes all the way to Middle East, a key source of oil for the resource-poor island nation.

Suga has little experience in diplomacy. Balancing between the U.S., Japan’s main security ally, and China, its top trading partner, will be tough, analysts say.

Japan hopes to regularize the Quad foreign ministers’ talks and broaden their cooperation with other countries. But each Quad member has its own political stance toward China and it would be difficult to agree on concrete steps even though they share perception of China as a common threat, analysts say.