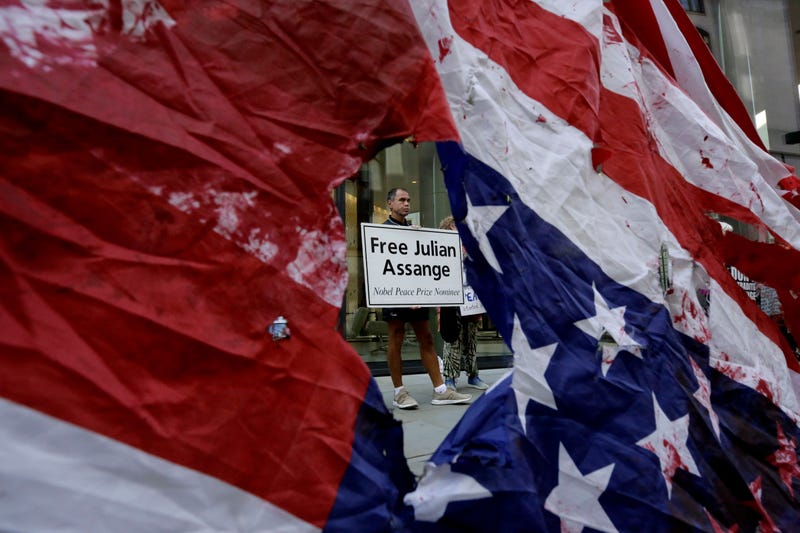 Photo credit A supporter of WikiLeaks founder Julian Assange is seen through a hole torn in a defaced U.S. flag during a protest outside the Central Criminal Court, the Old Bailey, in London, Monday, Sept. 14, 2020. The London court hearing on Assange's extradition from Britain to the United States resumed Monday after a COVID-19 test on one of the participating lawyers came back negative, WikiLeaks said Friday. (AP Photo/Matt Dunham)
By The Associated Press

LONDON (AP) — An American lawyer told an extradition hearing in Britain for Julian Assange on Monday that the WikiLeaks founder faces decades in prison if he is convicted on spying charges in the United States.

U.S. prosecutors have indicted the 49-year-old Australian on 17 espionage charges, and one of computer misuse, over WikiLeaks’ publication of secret U.S. military documents a decade ago. The charges carry a maximum sentence of 175 years in prison.

Attorney Eric Lewis, appearing as a defense witness, said the scope of the indictment pointed to “a very aggressive approach to sentencing on the part of the government.”

“All signs point to a very long sentence, measured in many decades,” said Lewis, a senior partner at Lewis Baach Kaufmann Middlemiss in Washington, DC.

“We are looking at a sentence somewhere between 20 years, if everything goes brilliantly, to 175 years, which the government could easily ask for,” he said.

Assange’s lawyers say the prosecution is politically motivated and that he will not receive a fair trial in the United States, They also argue that the conditions he would face in prison would breach his human rights.

Assange’s legal woes began a decade ago, when WikiLeaks published classified U.K. military documents about the wars in Iraq and Afghanistan. He has been in a British prison since he was ejected from his refuge at the Ecuadorian embassy in London in April 2019.

The extradition hearing began a week ago at London’s Central Criminal Court and is due to last until early October.

On Monday, District Judge Vanessa Baraitser denied a request by Assange’s lawyers that everyone in the court wear masks to reduce the risk of transmitting coronavirus.

The hearing was briefly suspended last week while one lawyer for the U.S. government was tested for COVID-19. The test came back negative.

Baraitser said masks were required in communal areas of the court building, and that anyone who wanted to wear one in the courtroom could do so.