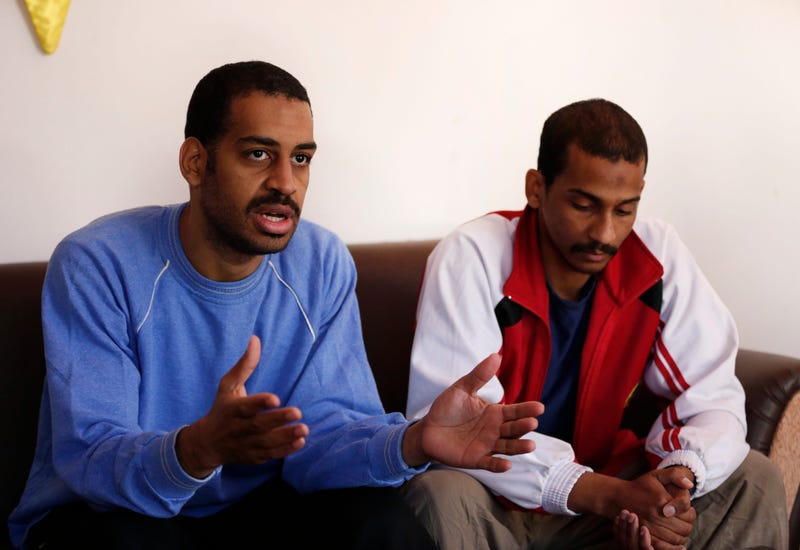 Photo credit FILE - In this March 30, 2019, file photo, Alexanda Amon Kotey, left, and El Shafee Elsheikh, who were allegedly among four British jihadis who made up a brutal Islamic State cell dubbed "The Beatles," speak during an interview with The Associated Press at a security center in Kobani, Syria. The Justice Department has notified the British government that it will not pursue the death penalty against two Islamic State militants suspected in the beheadings of Western hostages, removing a hurdle in the potential prosecution of the men in the United States. The decision, revealed in a letter Wednesday, Aug. 19, 2020, could allow Britain to began sharing evidence with federal prosecutors in the U.S for any potential case against El Shafee Elsheikh and Alexanda Kotey. (AP Photo/Hussein Malla, File)
By The Associated Press

WASHINGTON (AP) — The Justice Department has notified the British government that it will not pursue the death penalty against two Islamic State militants suspected in the beheadings of Western hostages, removing a hurdle in the potential prosecution of the men in the United States.

The decision could open the door to Britain to begin sharing evidence with federal prosecutors in the U.S for any possible case against El Shafee Elsheikh and Alexanda Kotey. An earlier British court ruling had blocked the sharing of evidence with U.S. authorities because the U.S. had not offered assurances that the death penalty, which was abolished years ago in the United Kingdom, was off the table.

“I know that the United Kingdom shares our determination that there should be a full investigation and a criminal prosecution of Kotey and Elsheikh,” Attorney General William Barr wrote to British Home Secretary Priti Patel in a letter released by the Justice Department on Wednesday.

“These men are alleged to be members of the terrorist group the Islamic State of Iraq and al-Sham and to have been involved in kidnappings, murders, and other violent crimes against the citizens of our two countries, as well as the citizens of other countries.”

The British men, captured two years ago by a Kurdish-led, U.S.-backed militia, are accused of participation in a brutal Islamic State group known for beheadings and barbaric treatment of American aid workers, journalists and other hostages in Syria.

U.S. officials have not announced any charges against the men, but have spoken publicly about their desire to see members of the cell, nicknamed the "Beatles” by surviving captors because of their British accents, face justice.

“If we receive the requested evidence and attendant cooperation from the United Kingdom, we intend to proceed with a United States prosecution,” Barr wrote. “Indeed, it is these unique circumstances that have led me to provide the assurance offered in this letter.”

The men were transferred to U.S. custody last October as Turkey invaded Syria to attack Kurds who have battling the Islamic State alongside American forces. They are being held overseas. Barr said that was not a long-term solution, so he set a deadline for action.

He said the British government had until Oct. 15 to resolve any legal objections it may have and to provide U.S. authorities with the evidence they seek. Otherwise, the men will be transferred to Iraqi custody for prosecution by Iraqi authorities, Barr wrote. He said the U.S. would not provide to third countries that might impose the death penalty any evidence it has already received, or may received, from the United Kingdom.

The British government confirmed that it had received the letter, with the Home Office saying in a statement that its top priority has always been to protect national security and to deliver justice for families.

The decision is a significant development in years of wrangling over Kotey and Elsheikh. The U.S. and British governments have an agreement to share documents, records and other evidence in criminal investigations. In 2015, the Justice Department asked for evidence that Britain had gathered on the “Beatles,” saying it was doing its own investigation into Americans who were murdered in Syria.

British authorities had been willing to provide the U.S. with evidence even without assurances that the men would not be executed if convicted.

In July 2018, after lawyers for Elsheikh demanded a review of the decision to allow the men to be put on trial in the U.S., Britain’s Home Office temporarily suspended cooperation with U.S authorities.

Then, in March, the British Supreme Court held that it was unlawful for the United Kingdom to provide evidence to a foreign country that could be used in a death penalty prosecution. The court has not yet issued its final order, Barr said, and even after that there could be additional litigation to block transfer of the evidence.

The IS militants known as the “Beatles” held Western hostages in Syria and tortured many of them, and also beheaded a group of journalists and aid workers in gruesome videos that were released to the world as propaganda.

The British leader of the “Beatles” cell, Mohammed Emwazi, who was also known as “Jihadi John,” was killed in a 2015 drone strike.

Emwazi was responsible for the beheading of James Foley, a 40-year-old freelance journalist who was killed in Syria after being kidnapped by militants. A video of that killing circulated online six years ago Wednesday.

His mother, Diane Foley, said in an interview that she was gratified by the Justice Department's action, which Barr had said would be coming soon in a conversation with her and other victims' families this month.

“I feel that both countries ideally should work together to hold these men accountable and give them a fair trial,” Foley said. “If they are guilty, they need to be put away for the rest of their lives.”

She said the only way to stop acts of terrorism was to hold the perpetrators accountable.

“This would be a huge step, so I am just very, very hopeful and grateful to the attorney general” and the Justice Department, she said.