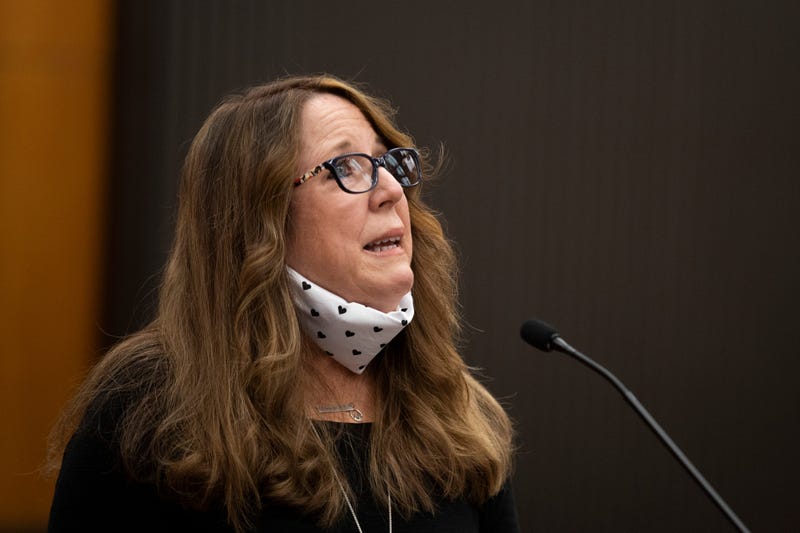 Photo credit Sandy James looks up from the podium as she makes her statement with Joseph James DeAngelo, known as the Golden State Killer, in the courtroom during the first day of victim impact statements Tuesday, Aug. 18, 2020, in Sacramento, Calif. DeAngelo will be formally sentenced to life in prison Friday. (Santiago Mejia/San Francisco Chronicle via AP, Pool)
By The Associated Press

SACRAMENTO, Calif. (AP) — Victims of California serial killer and rapist Joseph DeAngelo want him locked away in a distant maximum security prison with other inmates since he isn't going to spend the rest of his life on death row.

But they may not hold much sway over where the 74-year-old former police officer known as the Golden State Killer is imprisoned after he is sentenced Friday. State corrections officials said they must make their own evaluation about where and how DeAngelo can be housed.

Still, survivors and family members of victims have made recommendations during an ongoing sentencing hearing.

“You should be sent to the toughest prison in California. What a despicable piece of humanity you are,” Dolly Kreis, the mother of rape victim Debbie Strauss, who died in 2016, told DeAngelo in court.

He “deserves the worst possible environment, where he can live in fear as his victims did,” she said.

Gay Hardwick, another rape victim, said in court Wednesday that she is certain DeAngelo is angling to be sent to “some prison nursing home for old murdering psychopaths.”

In June, DeAngelo pleaded guilty to 13 murders and 13 rape-related charges between 1975 and 1986. He also publicly admitted dozens more sexual assaults for which the statute of limitations had expired. After the hearing, where victims are describing how they were traumatized by DeAngelo, he will be sentenced to consecutive life sentences under a plea deal that will spare him the death penalty.

Considerations involving his imprisonment include his medical and mental health needs, notoriety and safety concerns — potentially key calculations given his age and headline-grabbing crimes. Prosecutors have been trying to counter DeAngelo’s courtroom appearance as a feeble man confined to a wheelchair, noting in a court filing that jail video shows him to be “healthy and physically active.”

DeAngelo won’t be going anywhere for a while because the California Department of Corrections and Rehabilitation has indefinitely halted transfers from county jails to prisons because of the coronavirus pandemic. When he is finally transferred, he will automatically be sent to a maximum security prison, as are all those convicted of first-degree murder.

It will be up to prison officials to decide which prison and whether he must be housed in a protective custody unit.

“The court can make a recommendation, but ultimately, CDCR is the housing authority for the inmate population,” department spokeswoman Terry Thornton said in an email. The department “does consider these requests based on the nature of the case and out of respect for the victims as much as possible, but CDCR must follow its regulations to ensure safety and security within its institutions.”

The department has a special protective housing unit at Corcoran State Prison for high-profile inmates, though it’s not clear if DeAngelo would go there. Notable past residents have included Charles Manson and Sirhan Sirhan.

Pelican Bay has a maximum security unit, but most of what had been the supermax portion of the prison is now used for minimum security inmates under a court settlement.

”I don’t want to think of him breathing the same air and seeing the same sky as I do,” Hardwick said in an interview.

In court Wednesday, she described how he assaulted her in 1978. DeAngelo simply stared ahead with no response, as he has throughout the hearings. Except for his eyes, his face was hidden behind a mask designed to stem the spread of the coronavirus.

“I’m certain that there is method in his madness and that his plan is to weaken himself in order to be assigned his life without parole sentence in some prison nursing home for old murdering psychopaths where he thinks he will be treated more like a patient than an inmate,” Hardwick told the judge.

Better that he serve “his death-in-prison sentence within the cold walls of Pelican Bay, as far away as possible,” she said.

When he spoke, her husband, who was bound by DeAngelo during the attack on his wife, spun what he acknowledged was an elaborate fantasy in which their assailant is repeatedly brutalized by other inmates in prison in a manner similar to his crimes.

Jane Carson-Sandler, who was raped in 1976 and also addressed the court on Wednesday, is among those asking for DeAngelo to be housed with other inmates and not in an isolation unit.

“lt’s going to cause him fear, because they don’t like rapists that go after young girls,” she said in an interview, “so he’d be looking over his shoulder.”