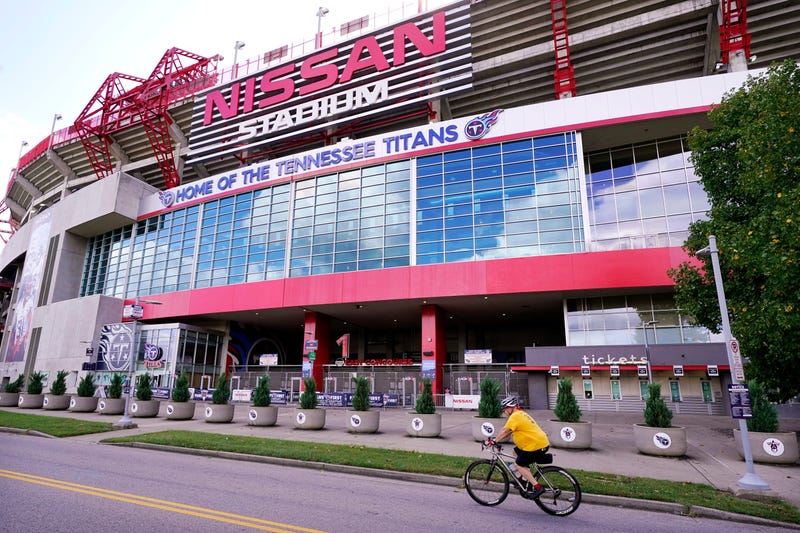 Photo credit A cyclist passes by Nissan Stadium, home of the Tennessee Titans, Tuesday, Sept. 29, 2020, in Nashville, Tenn. The Titans suspended in-person activities through Friday after the NFL says three Titans players and five personnel tested positive for the coronavirus, becoming the first COVID-19 outbreak of the NFL season in Week 4. (AP Photo/Mark Humphrey)
By The Associated Press

NASHVILLE, Tenn. (AP) — The Pittsburgh-Tennessee game originally scheduled for Sunday will be played either Monday or Tuesday after a new positive coronavirus test result Wednesday among the Titans, the NFL announced Wednesday.

The NFL said a new date and time would be announced as soon as possible and that the postponement would allow additional time for further testing.

On Tuesday, the NFL said three Titans players and five team personnel had tested positive for COVID-19. The Titans have closed their facility at least through Friday and will not be able to practice in any fashion together until Saturday at the earliest.

The Titans continue daily testing, and safety Kevin Byard said they are hoping no more positive tests turn up.

“I understand we had another positive today,” Byard said. "That’s definitely something that’s a possibility because the virus can show up three days later.”

Titans coach Mike Vrabel said soon after the NFL's announcement Wednesday: “Some of them are indeed experiencing flu-like symptoms, nothing I think out of the ordinary. We anticipate they will feel better shortly. Nothing of overly concern. But my concern is always with the health and safety of our players, our staff and their families.”

As for a potential Saturday return to working out, Vrabel was skeptical.

“I wouldn’t just assume that Saturday," he said. “We are preparing to play the football game now as early as Monday. Again, I think the focus and the understanding of this football team is now going to be shifted toward playing on Monday. I’m confident the league will allow us time ... to get some good practice in, to get on the field and move forward with the game.”

Both the Titans and Steelers are 3-0 and among the NFL's seven undefeated teams.

Tennessee beat Minnesota 31-30 on Sunday in Minneapolis, and the Vikings' team facility is closed at least through Wednesday.

“The Steelers-Titans game, originally scheduled for Sunday at 1 p.m. ET, will be rescheduled to allow additional time for further daily COVID-19 testing and to ensure the health and safety of players, coaches and game day personnel,” the NFL said.

“We’re going to trust the medical experts,” Steelers coach Mike Tomlin said. “If they deem it safe for us to proceed, we’re going to go down there with the intention of playing and playing to win.”

Cleveland Browns center JC Tretter, the president of the players’ union, said the outbreak was a reminder that everyone must be more vigilant despite low testing numbers across the league.

“It’s easy to fall into a sense of ease or relax on some of the protocols,” he said Wednesday. “But the protocols are what’s keeping us going, making sure that we’re making the right decisions. … We have been going really smoothly for a long time and now there was some expectation that this was eventually going to happen. It’s tough to keep the virus completely out.”

The Titans placed a pair of key players, defensive captain and lineman DaQuan Jones and long snapper Beau Brinkley, on the reserve/COVID-19 list on Tuesday. Vrabel said they will be bringing in a new long snapper for this game.

The Vikings said they had no positive test results on Wednesday and were planning to reopen their facility on Thursday. Players and coaches were set for virtual meetings on Wednesday, in lieu of practice for their scheduled game on Sunday at Houston.