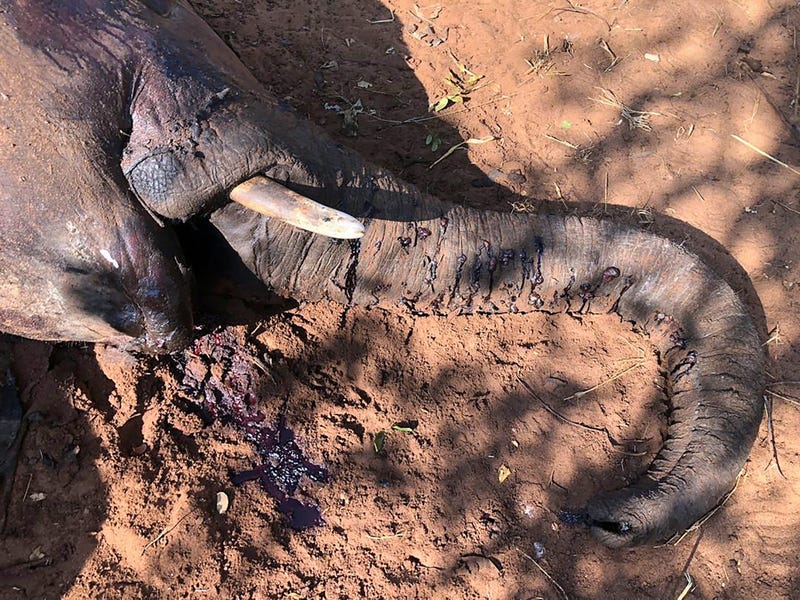 Photo credit A dead elephant is seen in Hwange National park, Zimbabwe, Saturday, Aug. 29, 2020. A spokesman for Zimbabwe's national parks said on Wednesday, Sept. 2 the number of elephants dying in the country's west from a suspected bacterial infection, possibly from eating poisonous plants, has risen to 22 and more deaths are expected. (AP Photo)
By The Associated Press

HARARE, Zimbabwe (AP) — The number of elephants dying in western Zimbabwe from a suspected bacterial infection, possibly from eating poisonous plants, has risen to 22, and “more deaths are expected,” a spokesman for the country’s parks agency said Wednesday.

Most of the elephants dying in the Pandamasue Forest, located between the vast Hwange National Park and Victoria Falls, were young or weak, said Tinashe Farawo, spokesman for the Zimbabwe National Parks and Wildlife Management Authority.

With food scarce, younger elephants that can’t reach higher tree branches “end up eating everything and some of the vegetation that they eat might be poisonous,” Farawo told The Associated Press.

He said the problem could persist through the dry season. Zimbabwe has been facing successive climate-induced droughts in recent years, leaving animals with less water and vegetation for food, he said.

Apart from possible bacterial infection, some of the animals could be dying due to the stress of walking long distances for food and water, said Farawo.

Farawo said overpopulation had become “the biggest threat” to the survival of wildlife in the southern African country's parks. The “animals are becoming a threat to themselves,” he said.

The dead young elephants were found with their tusks still on their bodies, ruling out poaching. In recent years poachers in Zimbabwe have poisoned dozens of elephants with cyanide and then have taken their ivory tusks to sell them to illegal traders.

Investigations will also try to establish if there is a link between the deaths and those reported in neighboring Botswana. Farawo, the parks spokesman, said so far “there is no evidence to link the Botswana incident and what is happening in Zimbabwe.”

Scientists are investigating the deaths last month of more than 275 elephants in Botswana’s Okavango Delta area. Poaching, poisoning and anthrax have also been ruled out in those deaths.

Animal welfare groups such as the African Wildlife Foundation, have expressed “concern” at the mysterious deaths of elephants in Botswana and Zimbabwe.

Parks rangers should urgently remove and destroy the carcasses of the elephants that are in close proximity to human settlements “to prevent any potential transfer of pathogens as a precautionary measure,” said African Wildlife Foundation Vice President of Species Conservation and Science Philip Muruthi, who is based in Nairobi, Kenya.

Botswana has the world’s largest elephant population, estimated at 156,000 and Zimbabwe has the second largest, estimated at 85,000. Last year about 200 elephants in Zimbabwe died of starvation as a result of the country’s drought.

Zimbabwe argues that it should be allowed to sell some of its elephants to foreign zoos to ease congestion and also raise more money for conservation, especially with COVID-19 induced lockdowns preventing visits of tourists from rich countries.

The congestion of wildlife in Zimbabwe's parks has also resulted in increased conflict between animals and humans living close to the national parks or forests. More than 50 people have been killed in such conflicts countrywide so far this year, the deadliest in a decade, said the parks spokesman.