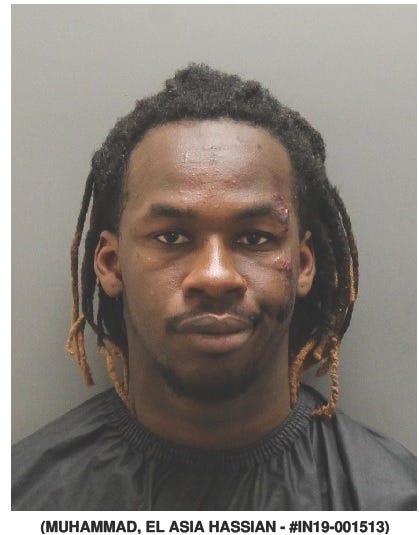 The Oconee County Sheriff’s Office has charged El Asia Hassian Muhammad for leaving the scene of an accident with death, which resulted in the death of a 39 year- old Seneca woman, Vanessa Leanne Neimeyer. This charge is a felony which carries a sentence up to 25 years in prison and up to a $25,000 fine.

Muhammad ran from the scene after the incident but was apprehended by the Highway Patrol without incident.

On July 1st, 2019 the SC Highway Patrol set up a license check point at the intersection of Wells Highway and Owens Road.

A vehicle driven by Muhammad was traveling east on Wells Highway and upon approaching the check point did not stop; which resulted in a pursuit by SC Highway Patrol. The vehicle went through the intersection at Clemson Boulevard. The vehicle then crashed into the basement of the residence located at 10695 Clemson Boulevard. The vehicle came to rest on top of Vanessa Leanne Neimeyer, who was in bed. Tragically, Ms. Neimeyer died at the scene. The Sheriff’s Office asks for prayers for this family.

This is an active and ongoing investigation. The Greenville County Sheriff’s Office is assisting in the reconstruction of the crime scene with their specialized traffic accident unit.

Please contact the SC Highway Patrol spokesperson for details on charges against the driver of this vehicle concerning the pursuit.

The Oconee Sheriff’s Office is conducting the investigation concerning the death. Information will be released as it is received.

He has been charged by the South Carolina Highway Patrol with: Failure to stop for Blue Light death results, Driving Under Suspension, and Failure to Comply with Direction of Police/Fireman. The Oconee County Sheriff’s Office has charged Muhammad hit and run accident with death.