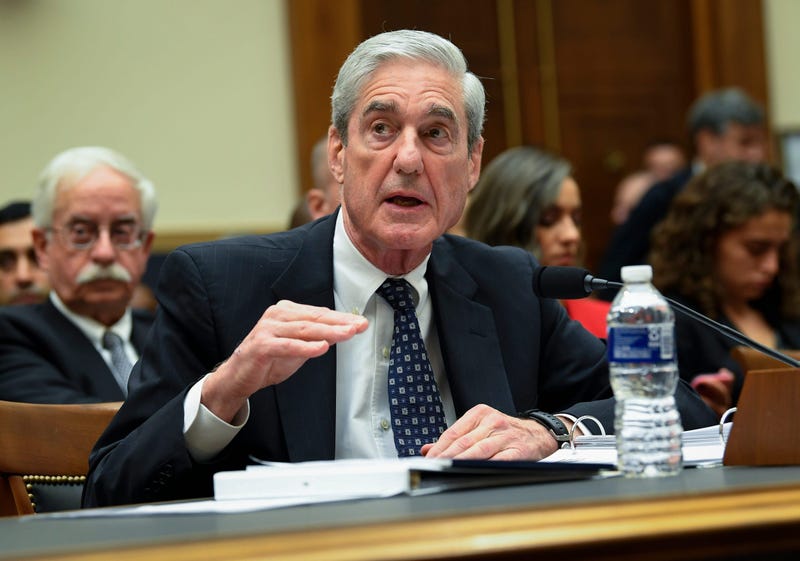 WASHINGTON (AP) — Believing a two-year shadow over the White House at last has been lifted, President Donald Trump and his allies seized on Robert Mueller’s testimony before Congress on Wednesday as a clear-cut victory, mocking the former special counsel’s findings and performance.

After claiming in advance that he might not watch the day’s proceedings, Trump tweeted and retweeted more than two dozen times during Mueller’s testimony about his investigation into the president and the Trump campaign’s ties to Russia.

As it ended, Trump tweeted: “TRUTH IS A FORCE OF NATURE!”

Pleased with how the hearings were unfolding, Trump even had a word of thanks for the Democrats as the special counsel prepared for the second half of his congressional testimony, before the House Intelligence Committee helmed by Rep. Adam Schiff, D-Calif.

“I would like to thank the Democrats for holding this morning’s hearing. Now, after 3 hours, Robert Mueller has to subject himself to #ShiftySchiff - an Embarrassment to our Country!” the president tweeted.

His eldest son, Donald Trump Jr., tweeted repeatedly, mocking Mueller’s lack of familiarity with some aspects of the investigation and accusing him of playing favorites.

“Funny, Mueller can’t understand the Republicans but he can totally understand the Democrats questions. This is a disaster for dems,” Trump Jr. wrote.

And the president’s personal lawyer, Rudy Giuliani, blasted Mueller’s frequent stumbles and calls for questions to be repeated, tweeting that the former FBI director was “being destroyed on credibility, knowledge, competence and numerous ‘ahs,’ pauses and excuses like ‘beyond my purview.’”

White House press secretary Stephanie Grisham issued a terse verdict at the midpoint of the hearings: “The last three hours have been an epic embarrassment for the Democrats. Expect more of the same in the second half.”

Mueller’s nationally televised appearance on Capitol Hill was long anticipated as a potential inflection point for the presidency, one that could galvanize more House Democrats toward impeachment or help dispel the investigatory cloud that has shadowed the White House for more than two years. Ever mindful of the need to spin powerful televised images, Trump and his fellow Republicans unleashed a barrage of tweets and statements that continued a pattern of attacks in which Trump has made baseless claims about Mueller’s probe and its findings.

Former special counsel Robert Mueller testifies before the House Judiciary Committee hearing on Capitol Hill in Washington on his report on Russian election interference on Wednesday. (Jonathan Ernst/Pool via AP)

Before Mueller even took his seat to testify, the president had tweeted nine times about the investigation, making clear that he had his mind focused squarely on the proceedings unfolding at the other end of Pennsylvania Avenue.

“So Democrats and others can illegally fabricate a crime, try pinning it on a very innocent President, and when he fights back against this illegal and treasonous attack on our Country, they call It Obstruction?” Trump wrote in one early tweet. “Wrong! Why didn’t Robert Mueller investigate the investigators?”

In fact, the Mueller report did not declare there was no collusion between Russia and the Trump campaign. Nor did the special counsel’s report exonerate Trump on the question of whether he obstructed justice.

Trump also revived a baseless charge that Mueller was “highly conflicted.” Mueller, a longtime Republican, was cleared by the Justice Department’s ethics experts to lead the Russia investigation.

Trump over the last week had been speculating with confidants about how the hearings would go. And while he expressed no worry that Mueller would reveal anything damaging, Trump was irritated that the former special counsel was being given the national stage, according to two Republicans close to the White House. They spoke on condition of anonymity because they were not authorized to speak publicly about private conversations.

Wary of Americans being captivated by finally hearing Mueller speak at length, Trump seethed to one adviser that he was annoyed Democrats would be given a tool to ramp up their investigations — and that cable networks would have new footage of Mueller to play on loop.

Though the probe did not result in charges of criminal conspiracy or obstruction, there has been growing concern among those close to the president that Mueller’s appearance could push undecided or reluctant Democrats toward impeachment.

The president’s allies enthused over results. Jay Sekulow, one of his attorneys, released a statement blasting the investigators as “politically biased” before concluding, “The American people understand that this issue is over. They also understand that the case is closed.”

The president had a light schedule Wednesday morning and afternoon during Mueller’s testimony. Later in the day, he was headed to West Virginia for a closed evening fundraiser. Aides suggested that he would speak to reporters and directly respond to Mueller when he left the White House.