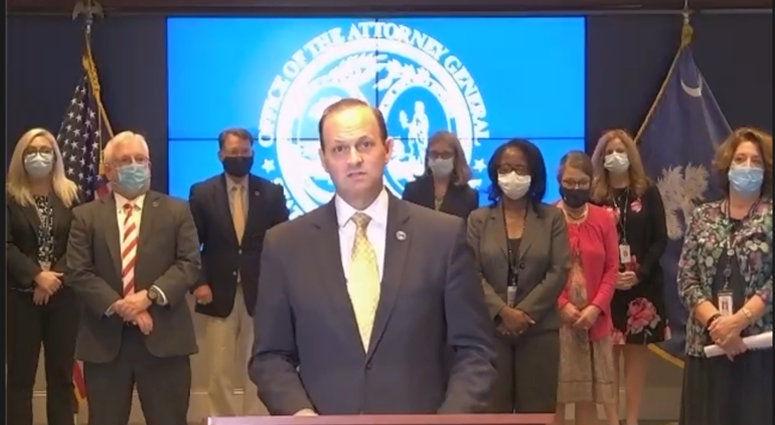 Attorney General Alan Wilson announced at a press conference Wednesday afternoon over $35 million in state and federal grants being distributed throughout the state of South Carolina to aid Crime Victims’ Services.

Of those funds, roughly $9 million is being distributed throughout the Upstate.

“$35 million being dispersed throughout the state, $9 million to the upstate, that’s going to go a long way to serving men and woman, especially during this very unique time in our nation’s history, when there’s a lot of lockdowns, lot of shutdowns,” AG Wilson said. “People are feeling more isolated, and maybe it’s easier for those with evil intent to exploit that as an opportunity to hurt someone. So know that you are not alone, and we are here to help you, to serve you in any way that we can.”

AG Wilson called out many of the Upstate organizations receiving portions of this grant money during the press conference as well, including:

The Attorney General said he wanted to list these places both to acknowledge them as well as to make South Carolinians who may need their services aware of their existence.

“Naturally, we would love to put ourselves out of business. It would be wonderful to serve the needs of child abuse victims and sexual assault victims, to be able to say that that wasn’t a crime that was happening in our community,” said Shauna Galloway-Williams, the Chief Executive Officer of the Julie Valentine Center in Greenville. “But until that day comes, we’ll continue to provide the services that we do.”

She said that funds like these grants go to providing their organizations’ direct services, such as child and adult therapy, family advocacy, and their forensic interview program.