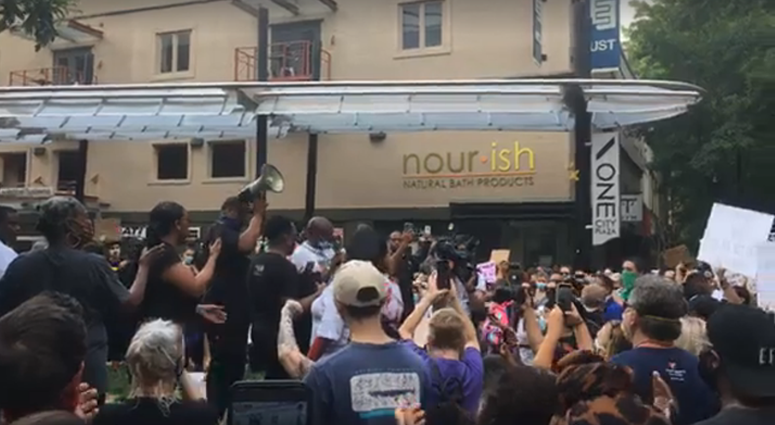 Chanting of phrases like “I can’t breathe!” and “No justice, no peace!” were heard along downtown as protesters marched and demonstrated in response to police brutality following the death of George Floyd in Minneapolis last week.

Several protests have occurred in response to Floyd’s death across the nation, including two previous protests in the Upstate, both on Saturday.

The protest was organized by Upstate Black Lives Matter Greenville and announced on Facebook.

Hundreds came to join in the protest, which started at 4p.m. in Falls Park before protesters marched down Main Street to One City Plaza while delivering chants and raising signs the whole way.

Upon arriving at One City Plaza, peaceful demonstrations began among speeches and continued chanting.

At least a couple people were reported being arrested by police around the area, but police have not yet confirmed any of these reports.

The march and early protesting was livestreamed on our Facebook page and can be viewed here.

Alia Paramore with the Greenville Police Department confirmed 4 people were arrested in Sunday's protest.  Charges are as follow:

*Unlawful Carrying of a Pistol