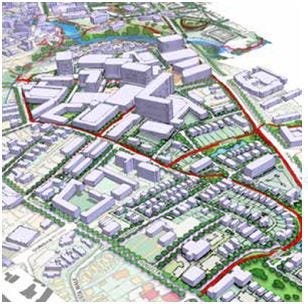 The Urban Design Associates will hold the meeting at McMillan Pazdan Smith on Augusta Street from 5:30-7pm.

The public will have the opportunity for a Q&A.

A second public meeting is scheduled for March followed by a draft plan in April.

WHO:  City of Greenville, Urban Design Associates (UDA)
WHAT: Public Meeting for the South Downtown Master Plan
WHERE: McMillan Pazdan Smith, 400 Augusta Street, Suite 200
WHEN:  February 4, 5:30 p.m. to 7:00 p.m.
WHY:  The public is invited to attend a South Downtown Master Plan meeting, with the goal of creating cohesive urban design standards to guide future development in the downtown area generally bounded by Augusta and Church Streets.
This area, identified in the 2019 Downtown Master Plan, includes the Haynie-Sirrine Neighborhood.
The planning effort will also serve as an update to the 2002 Haynie-Sirrine Neighborhood Master Plan.
Tuesday’s meeting will include a presentation from UDA, the project consultants, followed by a public engagement opportunity.
The City will hold a second public meeting in March, and create a draft plan in April. The City Council will review the new South Downtown Master Plan in June.