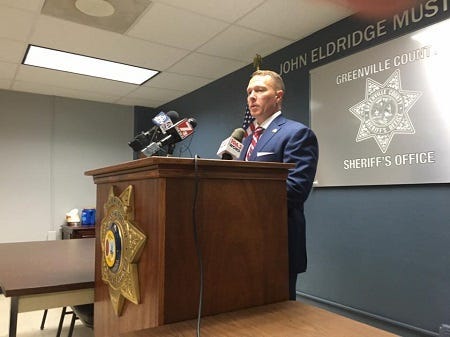 A trial date has been set for suspended Greenville County Sheriff Will Lewis.

Lewis is accused of statutory misconduct in office, perjury, misconduct of a public officer and obstruction of justice.

His court date is set for October 21st and faces one count of misconduct of a public officer and a charge of perjury, which stems from signing a sworn affidavit saying a "complete background check" was performed on Derrick L. Pendergrass, a captain with the Sheriff's Office while Lewis was Sheriff, when Lewis knew the background check was not completed as required by law in January 2017.

According to Lt. Ryan Flood, Pendergrass is no longer with the Greenville County Sheriff's Office.

A civil suit filed against Lewis by his former assistant Savannah Nabors accusing him of sexual assault and harassment was settled in October 2018.

According to the 16th Circuit Solicitor's Office, which is prosecuting the case, Judge G. Thomas Cooper Jr. will be presiding October 21st.