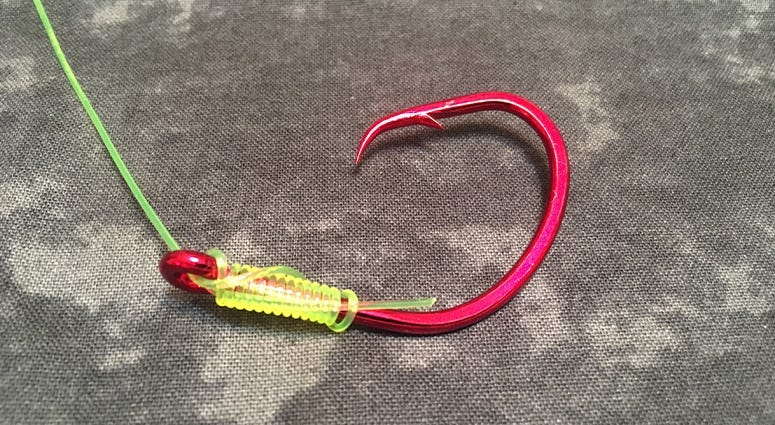 Transitioning from hunting season to fishing season frequently finds anglers preparing fishing tackle for the upcoming season. This often means replacing fishing line as well as retying rigs. For big game anglers, re-rigging is sometime more like a jigsaw puzzle, making sure this piece fits in with that piece and getting the whole rig linked together.

Working with heavy duty pound test fishing line often means figuring out alternative ways to attach one piece of a rig to another without tying knots to every little piece. Thin monofilament fishing line and light weight braided lines may be much simpler to tie into a variety of useful fishing knots, but when using 80 – 100 pound test line diameters, getting a good knot that will tie in a short space of line and hold up to the power it’s rated for is a chore.

Accordingly, many heavy tackle anglers opt for alternatives to tying knots in their heavy line.

Crimping – Most anglers think crimping, with the use of single or double metal sleeves is only used for wire. Not true. In fact, crimping may be one of the best ways to secure thick diameter monofilament line as the crimp grips the mono without causing damage to the line.

Swivels – Swivels may be used as a tie point between different pound test or different composition lines where the two components are not compatible due to differences in line size or material. Snaps or snap swivels provide a tie point for one line that attaches to a loop, eyelet or other connection.

Snelling – Snelling, most commonly used to attach large diameter line to heavy gauge hooks is similar to a knot except that the line wraps around itself and secures the tag end to the shank of the hook rather than just the eye.

Looping – Even heavy diameter lines are simpler to tie when using a loop knot with a large opening. Loops are most commonly tied using figure 8 knots. Loops can also be intertwined, bringing the leader through the loop to make a strong connection.

Twists – Twisting the tag end of a line only works when working with thin wire for toothy fish like pike, mackerel, or sharks, but using pliable wire and putting enough twists in the connection often means the difference between a caught fish and a lost fish.

Super Glue – The use of glue to secure one section of a rig to another gained popularity with professional bass fisherman. Bass anglers were perplexed when a duly tied fishing knot worked its way loose during a fight and the knot failed. Accordingly glue became a popular insurance step to prevent knots in monofilament line from coming unraveled. Since that time, super glue has become somewhat of a staple in many anglers’ tackle boxes not only for gluing knots, but to help adhere a variety of hair trailers and soft plastics to fishing lures.

Braid Knots- Opinions vary, but one of the most popular, and highest strength rated knots used for tying heavy diameter braid to other tackle such as hooks swivels or other eyelets is the Palomar knot. It is tied by looping the line, inserting the loop through the eyelet, then bringing the hook or swivel back through the loop and tightening the knot down.

Phillip Gentry is the host of “Upstate Outdoors,” broadcast from noon to 2 p.m. Saturdays on 106.3 WORD FM or online at 1063word.com. This week’s guest will include State Senators Stephen Goldfinch from Murrell’s Inlet and Thomas Corbin from Travelers Rest.

Photo Caption – A variety of methods for attaching one piece of fishing tackle to another exists without the use of traditional fishing knots. Photo courtesy Rusty Jackson.