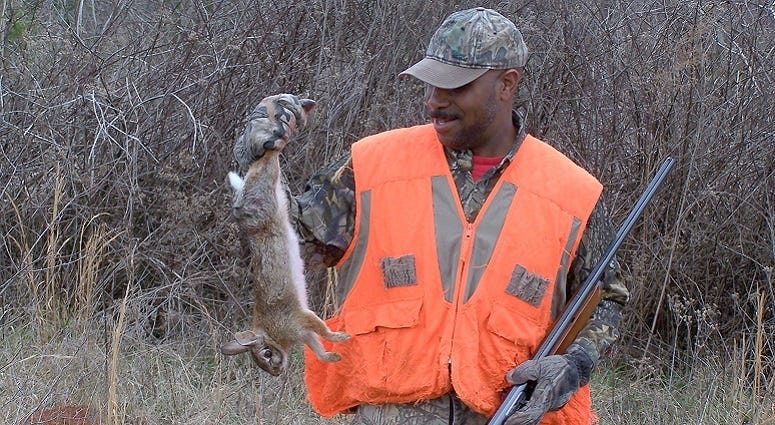 “Hunt in here” the mantra of the dog handler rings across the frosted hillside as the late February sun begins to peak over the East side of McCormick County. The beagles are antsy from the drive down to the farm but from the active wagging of tails working through the straw grass. It’s obvious the dogs know that bunnies are afoot.

As the pack breaks out into a trot, the hunt master – Tony Wilson from Honea Path, encourages his band of hunters not to let the dogs get too far out. Wilson has been hunting his family farm in McCormick County since he was old enough to walk. He knows that when the rabbits jump from one of the many briar patches or brush piles scattered on this particular hillside, they won’t have to run very far before they’re in another protected area, safe from the hunters and from the dogs, at least for the time being.

As soon as the dogs strike, rabbit hunters, dressed in brush buster attire, flank out around the perimeter of a dense briar patch inside an elongated washout ditch. As the pitch of the trailing dogs barking gets higher, one hunter punctuates the hunt with a report of his 12 gauge shotgun and the first rabbit of the day comes to hand.

Rabbit hunting is as richly steeped in tradition as any shooting sport and like all hunting sports has changed as time and the landscape has evolved. Most of this land throughout rural McCormick County and other surrounding counties of the Piedmont were once dominated by hardwood trees and communities of family farms. Rabbits and good rabbit habitat were plentiful.

As the farms died out and human populations began moving toward the cities, the land use was converted mostly to pine plantations. By the early to mid 1980’s timber and paper companies were utilizing the land to meet the growing needs for lumber and paper. Unlike deer populations which readily adapted to the land use and habitat changes, rabbit populations suffered, but the sport has carried on.

Fortunately for Wilson, his family farm has stayed with the family and he has learned the sport of rabbit hunting in this new era. While some of his tactics follow time tested tradition, some were learned along the way because they worked.

“I know a lot of rabbit hunters will fan out on a field and wait for the rabbit to circle back around to where he started” said Wilson, “they’ll still do that to a certain extent but I don’t think rabbits range out as far as they used to, which is why I like to hunt close. I’m usually watching a small patch with the dogs in there rather than waiting for them to run one off the next hill.”

Wilson indicates that some of the changes he has seen that require him to hunt close is the number of predators that call his land home. Back in the old days, coyotes were unheard of and foxes were rare. Nowadays he hears packs of coyotes, which prey heavily on rabbits, all through the year on his property and has seen plenty of foxes as well.

“Our hawk population has tripled” claims the rabbit man “nowadays a rabbit has learned that staying out in the open will get him killed, which is why I think they’d rather jump from one spot to another to escape rather than run in a great big circle.”

Hunting a 100-yard stretch of briar infested ditch usually means that he can space 4 - 5 hunters with enough room between them to watch for bolting rabbits rather than spreading everyone out over a hillside.

“Knowing your field of fire and being safe is number one” said Wilson.  “Everyone wears orange so each hunter can clearly see the next. We hunt each area thoroughly and then move on, it’s sort of a run and gun approach.”