On October 23, 1983, a suicide bomber killed 241 service members in an attack on barracks in Beirut, Lebanon.

On this date in 1983, a truck bomb exploded outside a Marine compound in Beirut, killing 241 U.S. service personnel and 58 French military personnel. We remember those who gave their lives and #HonorThem on this day. pic.twitter.com/3gNW0HJ2vP

In 1982, the service members were sent to Beirut on a peace-keeping mission in an effort to stabilize the country and stop the fighting between Syria, the Palestine Liberation Organization (PLO), and Israel. In the first contingency, 800 U.S. Marines from the 32nd Marine Amphibious Unit (MAU) were sent to the region. Their peace-keeping presence was anything but -- the Marines faced unexploded ordnance, sniper fire, and terrorist attacks.

And on October 23, one attack would kill more service members than had been lost since Iwo Jima.

A suicide bomber driving a truck packed with 2,000 pounds of explosives drove into the four-story barracks building housing the Marines. The attack killed 220 Marines, 18 sailors, and 3 soldiers. A corresponding attack on the nearby buildings housing French paratroopers killed 58 French soldiers.

"I know there are no words that can express our sorrow and grief over the loss of those splendid young men," then-President Ronald Reagan said the day of the attacks.

Hezbollah was eventually identified as the terrorist group responsible for the attack. U.S. troops withdrew from Lebanon the next year, but Marine Corps leadership would continue to face criticism that the barracks were poorly protected. In the 1985 Inman report confirmed that Marine Corps officers failed to take proper steps to protect the Marines.

The family members of those lost spent the next three decades fighting for compensation in court. It wasn't until April 20, 2016, that the Supreme Court ruled the families of the bombing victims should be allowed to collect $1.75 billion in Iranian funds.

A memorial was built in Jacksonville, North Carolina -- the hometown of many of those killed in the attack -- in 1986. 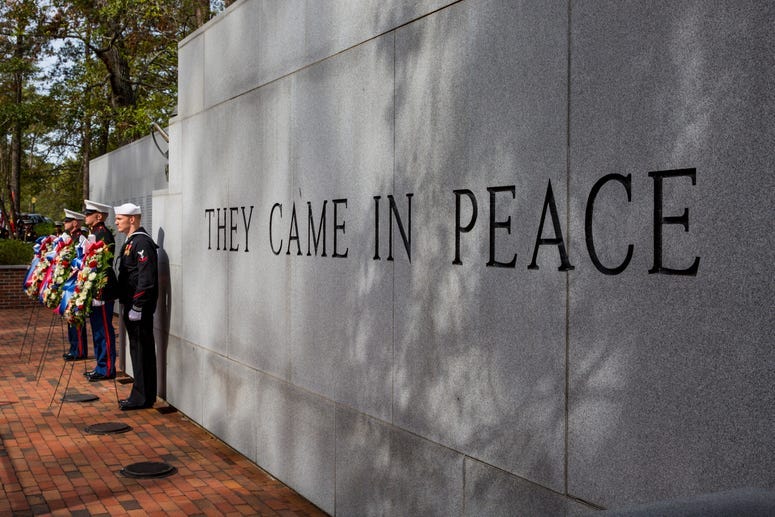 The words “THEY CAME IN PEACE” and the names of 273 of the service members killed in the attack are etched into the memorial.