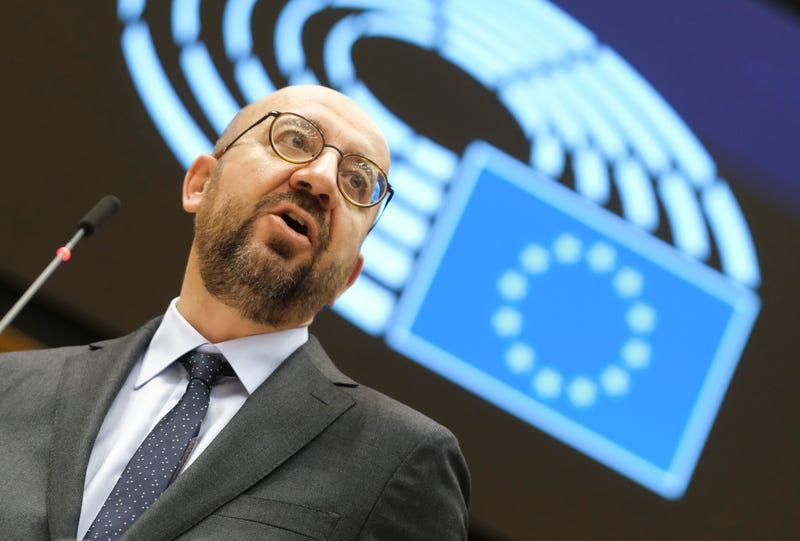 BRUSSELS (AP) — Britain and the European Union will resume their stalled trade negotiations at an “intensified” pace, the British government said Wednesday, in hope of striking a deal within weeks to avoid a messy economic breakup at the end of he year.

The announcement came five days after Prime Minister Boris Johnson declared that the talks were over unless the bloc made a “fundamental” change of policy,

There is little sign that has happened. But Britain seized on conciliatory comments by EU chief negotiator Michel Barnier, saying they offered the chance of a breakthrough.

Barnier has already agreed to “intensify” talks — a key U.K. demand — and to discuss the legal text of an agreement. On Wednesday he said compromise would be needed from both sides to get a deal.

That turned out to be the key. Britain has long complained that the EU expects it to make all the concessions.

Johnson’s office said that on the basis of Barnier's words it was “ready to welcome the EU team to London to resume negotiations later this week" for “intensified” talks.

“It is clear that significant gaps remain between our positions in the most difficult areas, but we are ready, with the EU, to see if it is possible to bridge them in intensive talks,” Downing St. said in a statement.

Barnier spokesman Daniel Ferrie said EU negotiators would travel to London on Thursday. The first chunk of negotiations is due to run through the weekend.

Barnier told the European Parliament that “despite the difficulties we’ve faced, an agreement is within reach if both sides are willing to work constructively, if they are willing to compromise.”

He also said that "the European Union’s attitude in this negotiation has in no way shifted and it will not shift.”

But Downing Street focused on Barnier’s words about compromise and his acknowledgement that a deal would have to respect the U.K.’s “sovereignty,” a key term for British Brexit supporters.

The two sides have been trying to strike a trade deal since the U.K. left the EU on Jan. 31. They must do so within weeks if an agreement is to be ratified by the end of the year, when a post-Brexit transition period ends.

Johnson's about-face will reinforce suspicions that his walkout was a gesture designed to inject momentum into the sluggish talks.

The two sides have come close to agreement in many areas during months of fraught negotiations, though big gaps remain over fishing rights — highly symbolic for maritime nations on both sides — and rules to ensure common regulatory standards and fair competition.

The EU fears the U.K. will gain an unfair advantage by slashing food, workplace and environmental standards and pumping state money into businesses once it is free of the bloc’s rules.

The bloc also accuses Britain of seeking the kind of unfettered access to its markets usually reserved for EU members.

“The U.K. wants access to a single market while at the same time being able to diverge from our standards and regulations when it suits them,” European Council President Charles Michel told the European Parliament on Wednesday. “You can’t have your cake and eat it too.”

Britain accuses the bloc of seeking to impose demands that it has not placed on other countries it has free trade deals with, such as Canada.

If there is no deal, businesses on both sides of the English Channel face tariffs and other obstacles to trade starting Jan. 1. British business groups warn that could mean border delays, soaring prices and shortages of some goods.

Barnier's emollient tone contrasted with the combative stance of Michel, who said that if Britain wants vast access to the 27-member bloc's markets, it will have to keep its waters open to EU fishermen, something the U.K. is refusing to do.

EU leaders also remain angry over the U.K.'s plans to disregard some parts of the legally binding withdrawal agreement it signed with the bloc.

If passed, the Internal Market Bill will allow the British government to override parts agreement relating to trade with Northern Ireland, the only part of the U.K. to share a border with the EU.

Johnson’s government says it needs the legislation as an insurance policy in case the EU behaves unreasonably after a post-Brexit transition period ends on Dec. 31 and tries to impede the flow of goods between Northern Ireland and the rest of the U.K.

The bloc sees it as a flagrant breach of an international treaty that could undermine the delicate foundations of Northern Ireland’s peace settlement, created by the 1998 Good Friday accord.