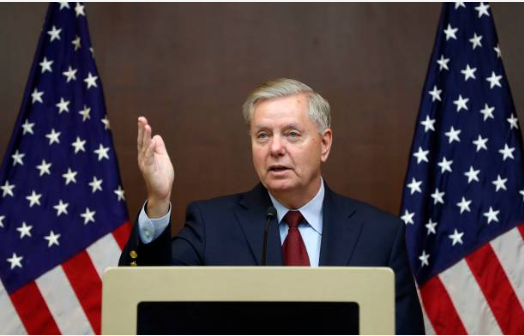 South Carolina Democrats have filed a formal complaint against U.S. Sen. Lindsey Graham for making a campaign fundraising appeal while speaking with reporters on Capitol Hill following judicial confirmation hearings. The South Carolina Democratic Party said on October 15th that Graham "committed a crime and violated longstanding ethics rules by openly raising money for his campaign in a Federal government building while leveraging his official U.S. Senate activity," according to a copy of the complaint filed with the U.S. Senate Select Committee on Ethics and obtained by The Associated Press. Graham's spokesman said any possible violation was unintentional.
When Graham was asked how much he could attribute the Supreme Court issue to his recent campaign fundraising haul, which set an all-time record for Senate Republicans at $28 million, Graham said he thinks the Palmetto State's voters are excited about Barrett and then promptly directed people to his campaign website.

Graham said, “I don’t know how much it affected fundraising today, but if you want to help me close the gap — (go to my website) — a little bit goes a long way."

So we want to hear from you: Did Lindsey Graham violate ethics rules by openly asking for campaign funds while in a federal building?