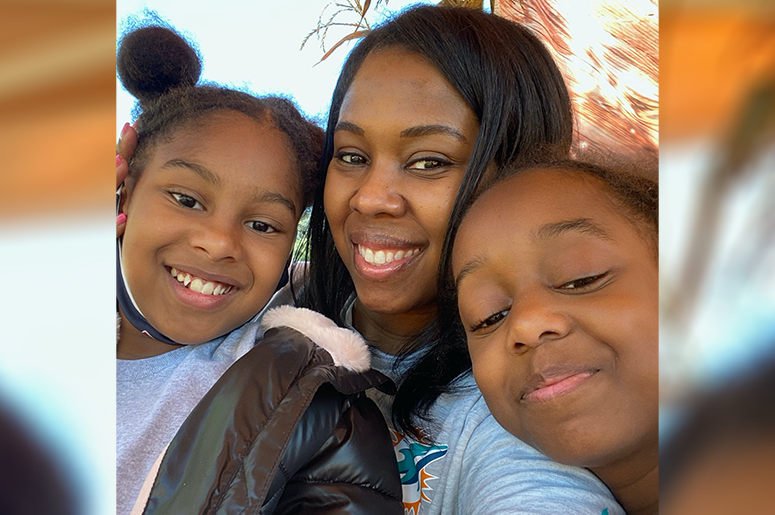 When you ask Sarina Brown (APRN, DNP, FNP-C) how she would describe herself, she’ll tell you, “I’m a previvor.” Because for Sarina, her journey began before a cancer diagnosis. But she was in for one hell of a battle.

For Sarina, her story starts with her family history. “You know, I used to have a lot of talks with my Grandma on her porch. She always told us the history of different family members, their stories, how different people passed away.” But, when it comes to Sarina’s family, the BRCA2 gene, is an unwelcome, but present member, starting with one of Sarina’s Aunts.

Sarina’s Aunt, Jackie was diagnosed with breast cancer at the young age of twenty-five. Jackie fought hard, underwent chemo, and for a while she was in remission. And, as diagnosis would roll in, Aunt Jackie would face another fight. By the time Jackie was in her forties, the cancer returned. By the time it was discovered, it had metastasized to her brain and spine. Sarina, only nineteen at the time, was standing by Jackie’s side through her treatment, along with, Amanda (who would go on to become a nurse herself), Jackie’s eleven-year-old daughter. But, sadly, after another bout of chemo, Jackie lost her battle with breast cancer.

Several years later, Sarina had a first cousin, Sebrena, who was also diagnosed with breast cancer. Aware of the familial history, her doctors tested her for underlying genetic causes. And, upon hearing her cousin’s diagnosis, Sarina made a promise to herself. “If I found out I have this gene, I’ll have a mastectomy.”

Working in the healthcare community and armed with a family history of BRCA2 and cancer diagnoses, Sarina decided to get tested. As a testament to Sebrena and her valiant fight against he disease, Sarina said, “If it weren’t for my talks with Sebrena, I may not have gotten tested. I feel that her passion and her awareness of the BRCA gene could have helped save my life.”

Following Sebrena’s diagnosis, two more of Sarina’s aunts went on to get tested. They too were positive for the BRCA2 gene. But for Sarina’s family, there were more tests, and more positive diagnoses. And, as the tests and diagnoses continued to stack up, Sarina recalled how her Grandmother and Great Aunt were both diagnosed with ovarian cancer.

Initially, her doctors told her not to worry, neither of her parents had suffered from cancer, and with the cancer stemming from her father’s side, it was unlikely that she would be affected. But they were wrong. Sarina’s test came back positive for BRCA2. And, in the wake of her diagnosis, Sarina was faced with a memory, with the promise she had made herself.

“At first I was scared. I wanted to change my mind. But then, I thought about my family members, my cousin Sebrena. I remember going to chemo with Aunt Jackie and talking about chemo and treatments with Sebrena. I remember seeing how their passing went on to affect Amanda, Raven, and Ary. That’s when I decided, I don’t want to put my daughter’s through that if I can try to avoid it.”

As she began to cope with her diagnosis, Sarina sought advice from healthcare advocates who had always been in her corner, including her PCP Dr. Heidt—who went over Sarina’s family history, listened, and served as a resource—and her OBGYN, Dr. Gower, who listened, offered support, and even referred Sarina to a genetics counselor, who could offer perspective on her familial ties to BRCA.

Surrounded by a tight knit group of family, friends, and healthcare providers, Sarina sought council from those she loved, and spoke to the children of family members they had lost. All the opinions formed resounding chorus, echoing how they would all rather have Sarina there, alive, and with them.

Shortly after discovering that she had BRCA2, she began to talk to coworkers and friends within her hospital. She consulted with nurses, surgeons, oncologists. She even consulted a plastic surgeon, Dr. Boland that she had known since his residency, about reconstructive surgery after the fact. Recounting the early days of her diagnosis, Sarina recalls telling Dr. Boland that she was thinking about having a mastectomy.

He replied, asking, are you BRCA? And she said yes. Dr. Boland immediately told her, have the mastectomy. And, in addition to advice, he told her, that he’d be there every step of the way, cheering her on.

Going through consultations, Sarina took the time to weigh her decision, to make sure that she chose a doctor who would put her first. “It’s important to find someone that makes you feel comfortable. You have to find someone you can trust and be honest with and go on this journey with you. If you feel like the person you are seeing is not trying, there are others. This is your life and you have to take it into your hands. You have to be your own advocate. With my doctors, I always felt like a priority.”

Sarina ultimately chose to go with Dr. McKinley as her surgical oncologist. “I remember going through consultations and getting a good feeling. I liked the surgeon and I liked the staff.” Sarina recounts telling Dr. McKinley that, “I feel like I have ticking time bombs on my chest.” His response? To remember that while they might go off, they also might not. It was essential to Dr. McKinley that Sarina was the one ultimately in charge of her decisions. Now, laughing, and looking back, Sarina will tell you, “I knew I wanted Dr. McKinley as my surgical oncologist. I knew he would take everything off, and I knew that Dr. Boland would put everything back on.”

Sarina attacked her diagnosis with a fervor. Her BRCA2 confirmation came in early August 2018. And by Christmas, Sarina had completed a double mastectomy.

And yet, even after the mastectomy, a long healing process, and reconstructive procedures, Sarina knew her battle wasn’t done. She continued to visit Prisma’s Health Cancer Institute, returning every year to talk about nutrition for cancer prevention, they discussed research studies, and offered advice. But for Sarina, there was still more at stake. Knowing her family’s history with ovarian cancer, a hysterectomy was the next step. Her doctors advised her that she should have the procedure before she was 40. And knowing that ovarian cancer had affected her grandmother, and claimed the life of her great aunt, Sarina knew that she didn’t want to be sick in the hospital, knowing she could have done something preventative.

“I went and talked to Dr. Puls about my options, knowing that there are people who have clear screenings all the time, but then some had pathology come back with cancer. Hearing that kind of just sealed the deal for me. I knew I was just going to go ahead and get this all over with and get on with my life and enjoy living.”

As Sarina went through surgeries, recovery processes, and treatments, she was never alone. From being surrounded by fellow Doctors and Nurses, like Dr. Porter, the founder of Just Cause Scrubs. He offered Sarina council, checked on her, made sure that she had meals and water. He offered motivation, championing her as Rockstar, and giving Sarina the courage to keep fighting.

From being surrounded by her sister-in-law April, who is more like a sister, to having her husband Karlos, and her two daughters by her side, Sarina had an entourage of cheerleaders surrounding her and fighting to be by her bedside. In fact, as she recovered, Sarina’s daughters followed in their mother’s footsteps, acting as miniature nurses, ensuring that their mother had water by her bedside, warm meals in bed, and an outpouring of love.

For Sarina, sharing her story isn’t always easy, but for her, it’s a pivotal part in the recovery process, and in helping others fight through the same struggles.

“For me, sharing can be hard. I’d liken it to when you have a baby. Sometimes you go through the worst delivery and the worst experience, but when it’s over, you look at the gift that’s there. I look at all the pain that I went through, but I always had people there for me, no matter what, no matter what time I needed to talk, there were people who were there for everything and made it easier for me to talk about it. Because I feel like I was given a gift. My life is a gift. The people in my life are gifts. And I want everyone to have that gift too.”

As a previvor, as a Doctor of Nursing Practice, a warrior, a mother, a wife, and an advocate, Sarina offers a message of hope. “I will always tell other women with this gene—you are not alone.  There is a huge community on Facebook and Instagram, there are women who are going through the same thing. You are not in this by yourself. Whatever you want to choose for your life is your choice. No one can force you to do anything, but there are people who can talk to you about the options for your lifestyle and give you the right advice for when you are ready. Absorb all the knowledge you can and make the best decision that you can and that’s right for you.”

For Sarina, the journey of recovery will never truly be over. She faces each day with a renewed dedication to nutrition, to nurturing her body with exercise, plenty of water, rest, and healthy foods to ensure a long, cancer free life. And, on top of her work as an active mother, a wife, and a Neurology Nurse Practitioner, she continues to work as an advocate and a shoulder for women facing a similar battle.

Today, Sarina is heavily involved in her community, assisting with everything from breast cancer education and awareness to volunteering in her community and helping people register to vote. Sarina’s survival filled her with a thirst for life, and a dedication to make life better for everyone around her.

“I came from a place where I was exhausted, where I felt like I was dying, where I couldn’t sleep and rest. Now, I have so much energy and a hunger to give back. I’ve even started pursuing passions like iPhone-photography, because now, I want to capture happy memories, I want these memories, and this feeling to last.”

Every cancer story is different. With its own trials, tribulations, wins, and losses. For Sarina, her story is one of victory. And, while it’s still on-going. It’s a story of incredible strength and unparalleled perseverance. Sarina Brown is previvor.