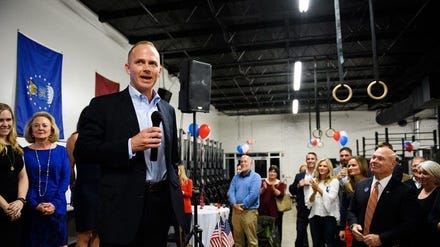 Greenville SC - Fourth District Congressman William Timmons was a guest on the Tara Show Thursday and fielded a barge of questions from host Tara Servatius on a wide range of topics.

Timmons was asked about the hotly contested US Senate race between Senator Lindsey Graham and his Democratic opponent Jamie Harrison. Timmons expressed his doubts on polls showing Senator Graham being tied with Harrison and predicted Graham would "win by 200,000 votes".

Tara also asked the Greenville Republican about the presidential race and President Trump's poll numbers. Timmons cited the "shy voter" reaction where respondents may be uncomfortable sharing their true opinion with the pollster.

Timmons also questioned the methodology of today's phone based polling, anecdotally mentioning his parents still having a landline and not answering calls from unknown numbers. He cited the same issue with cell phones and doubted the pollster was getting adequate sample sizes to reach a reliable outcome in their polling.

Timmons pulled no punches when Tara brought up the recent revelation of emails from an allegedly discarded Hunter Biden laptop, that contained emails that thanked the then Vice-President's son for setting up a meeting between his father and a Ukrainian energy executive. A meeting that the Vice-President has denied ever happened.

The Congressman said Hunter Biden was "corrupt and immoral" and claimed that the Democratic nominee has been allowed to avoid answering questions about his son's business dealings.

To listen to the complete interview with US Representative William Timmons on the Tara Show, click here.

Timmons is finishing his first term in Congress and is running for re-election. He is opposed by Democrat Kim Nelson and Constitution Party Candidate Michael Chandler on the November 3, 2020 general election ballot.