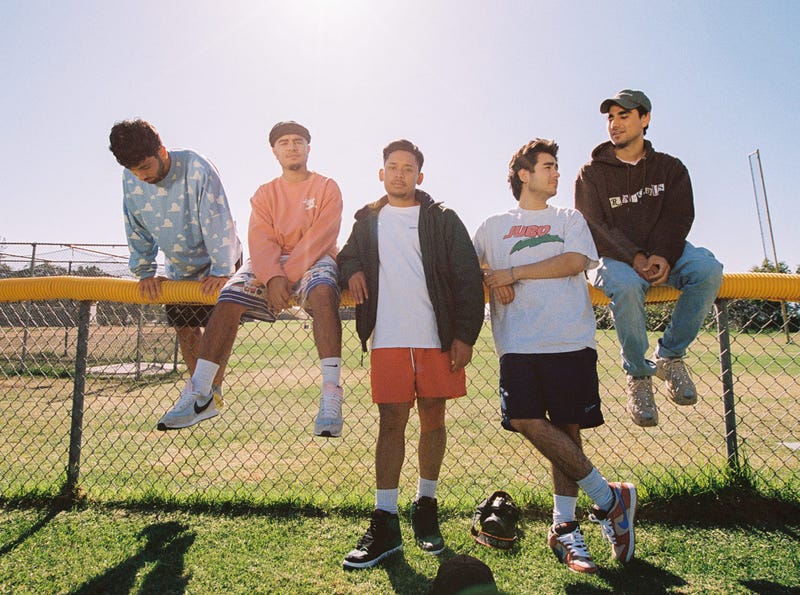 It started in the shed.

This was in San Jose, CA a few years ago, when a group of high school classmates made a decision that changed the course of their lives. They were doing that classic thing: starting a band. There was Dom, the oldest and in some ways the architect; Isaac, business-minded and ambitious; Joseph, thoughtful and reserved; and Tarrek, who began to understand the power of music as a boy while watching his father play the drums at family functions. They all loved music and soon found a new kind of satisfaction: “The feeling of making a song and enjoying it more than something from an artist you look up to—once you feel that, it’s like, This is it,” says Tarrek, trying to put the sensation of one’s own blossoming talent into words. Creating songs was all they wanted to do, at first for the sheer thrill and enjoyment, and eventually to be heard—to really make their mark the way their heroes, like Tyler, The Creator and Frank Ocean, did. They met Jorge, a young designer/videographer/photographer, on the internet, and he knit everything together. They were a group now, with a name, a bright, voracious sound and a vision.

The Peach Tree Rascals were born in a ten-by-ten wooden shed in the backyard of the house Dom grew up in. Technically, it was the second shed. The first was made entirely of metal, better suited as a sweatbox than a recording studio; Dom’s dad schooled the guys in fabrication and helped them build a comfortable space that would just be theirs. In that space they recorded hits like “Mariposa,” a bittersweet ode to fleeing love, and “Mango,” an anthem for anyone desiring something better. These songs alone have been streamed millions of times in less than a year. In fact, they uploaded their first song, the buoyant and defiant “Glide,” to DSPs in May 2018. They mixed and mastered everything themselves. With no formal training, Dom spent thousands of hours learning about audio software and production. He taught himself to play multiple instruments, too. Working at that time without a label or even management, they embodied the DIY spirit of young, unbridled creativity; “Don’t tell me what the fuck to do” is the first line on “Glide,” sung sweetly rather than angrily, a perfect encapsulation of the group’s happy-go-lucky aesthetic. Now, they’re signed to 10K/Homemade Projects, the joint venture between the Elliot Grainge-led label that represents music’s cutting edge, and the Zach Friedman- and Tony Talamo full-service management company. As Tarrek says, “We’re PTR—we don’t come from much, but we’ve always made the best with what we have.”

Of the group’s sound, with its primary-color chords and optimistic lyrics, Dom, who produces all of the Rascals’ music, says it’s “a combination of all the music we love and are inspired by. When I come across a song that makes me feel really good I reverse engineer it.” PTR tend to record way more than they release. “After making a ton of songs there’s usually a few special ones that stick out from the bunch,” Dom says.

Growing up in San Jose, the guys couldn’t have felt further from the epicenter of music. Many of the Rascals are the children of immigrants, and none of their families have ties to the recording industry; in fact, many of their family members were skeptical initially about their newfound pursuit. “Accomplishments like just releasing music felt more like a dream than a reality in San Jose,” Tarrek says. And so Tarrek was drawn to reality programs that showcased regular folks pursuing larger-than-life ambitions—now the music biz is his reality, singing and writing in PTR. Likewise, Dom and Isaac became interested in the acclaim and control offered by hip-hop, where you could produce a beat yourself, rap over it, upload it to SoundCloud, and share it with your classmates. It put you on the same trajectory as, say, Juice WRLD. Dom learned how to produce and Isaac sharpened his pen as a rapper.

“Growing up, my ear for music was always evolving, and all credit goes to my parents,” says Joseph, who writes and sings. “That came from hearing my dad play the guitar, or my mom playing Fleetwood Mac when she cooked. I didn’t realize it at the time but they were molding me.” His parents hail from the Philippines and Joseph says that they’re proud because “deep down they’ve always wanted me to do something that would bring me happiness.”

The pursuit of happiness, whether it’s about the long course of one’s life or something as simple as a reason to smile in the morning, is central to PTR. Jorge understood that instinctively, and after Isaac encountered his work on Twitter and asked him to come up with some visuals for PTR, he started drafting single artwork and logos like mad. Jorge says that he thinks of the PTR community “as dreamers like us.” Even when reality feels like a cruel joke, PTR stays looking for reasons to push on positively. “Our merch, songs, and videos are a representation of that,” Jorge says. “The way the hood on our hoodie is printed with a smile, so that fans can let that graphic smile for them when they’re not feeling okay—that’s the attention to detail we want for  all of our offerings.”

The group has released 13 songs so far, and plan on releasing a new single each month for the rest of the year. In early 2021, the group will release its first EP, the culmination of so much hard-work and dreaming, creating music that isn’t bound by genre. As Isaac puts it, “The future of PTR depends on what we wish to accomplish. It’s totally in our hands and work ethic, but we know we want to be as big as possible.”