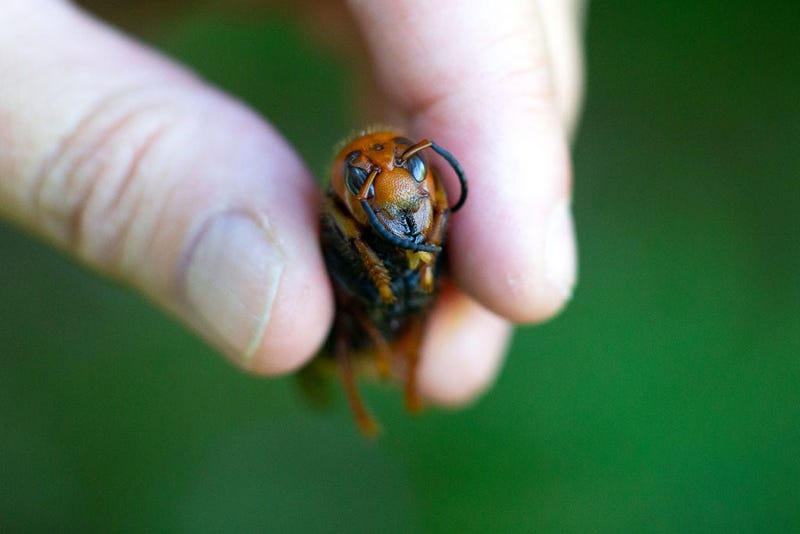 UPDATE/CORRECTION: all of the hornets survived but thankfully remain in captivity.

What looked like a team of SpaceX astronauts destroyed a newly discovered Asian giant hornet nest.

Quite a morning shooting Asian giant hornets and our WA Ag workers taking them out in Blaine. Love those sting-resistant suits they wear! #MurderHornets pic.twitter.com/K2ZmASinUs

A team from the Washington State Department of Agriculture set out to contain and then destroy the recently discovered nest. The process sounds surprisingly straight forward:

"Saturday’s operation began at about 5:30 a.m. with the team donning protective suits and setting up scaffolding around the tree so they could reach the opening of the nest, which was about ten feet high. The team stuffed dense foam padding into a crevice above and below the nest entrance and wrapped the tree with cellophane, leaving just a single opening. This is where the team inserted a vacuum hose to remove the hornets from the nest."

These particular hornets, the largest on earth, are mighty enough to kill an entire bee hive in just hours. Should they take foothold in the Paicifc Northwest, our crops could be put into pollination danger without our busy bee friends.

So how big is a hive of hornets?

"In all, the entomologists with WSDA’s Pest Program removed 98 worker hornets. During the early morning extraction, 85 hornets were vacuumed out of the nest and collected another 13 live hornets were collected with a net while observing the nest on Friday."

Even being vacuumed out of bed on Saturday didn't stop these tough ladies. Post-eradication counting revealed that all of the 85 #AsianGiantHornets were still alive later in the day on Saturday.

No, you can't have one. The specimens are going to research. 😁 pic.twitter.com/nm3QyatcAp

It's a small victory against a ticking time bomb. The next steps include felling the tree, slicing it open and determining whether or not the nest had time to produce new queens. You can read more about it, or visit agr.wsda.org/hornets for more.