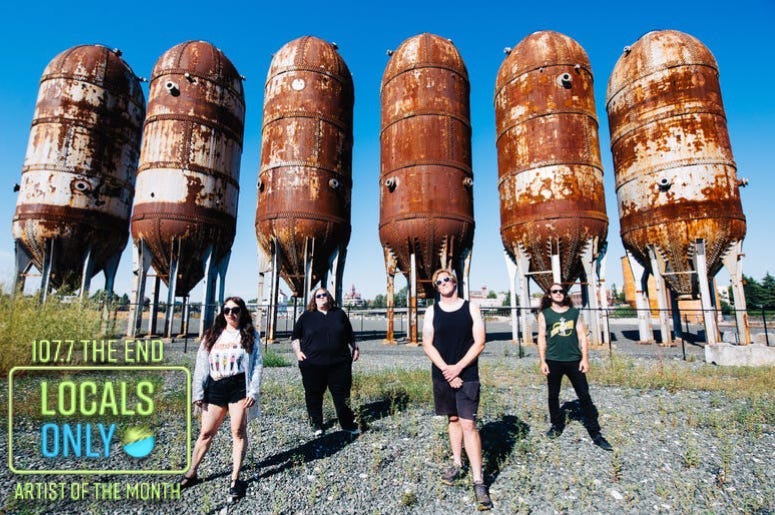 About a year and a half ago I got an email from a very good band in Bellingham called Lipstitch asking about getting their new single on Locals Only. The song was excellent so playing it on the air was a no brainer. A few months later, Lipstitch opened the Double Major show at WWU with Death Cab For Cutie, Odesza, Chong The Nomad and more. It was obvious then that we were probably going to keep hearing about this band for awhile.

Catch new music from our beloved PNW bands every Sunday night at 8pm on Locals Only!Lipstitch is joining other bands giving us something to feel a little bit better about in the middle of a pandemic with the release of their debut full length. The album, Who's Left and Who's Leaving will be released by our friends at Rocket Heart Records on September 4th.From top to bottom the whole album is great, but one song just keeps jumping out at me, "Tough Year". The song likely wasn't written about what we are going through in 2020 but it certainly captures a feeling that I think a lot of us easily relate to. It's also a really great song so you'll be hearing it all month long on 107.7 The End while we celebrate Lipstitch as our September Locals Only Artist Of The Month.

The vinyl run of the new album is limited to only 250 baby blue records, and can be picked up here.

Learn more about Lipstitch below:

On their debut full length Who’s Left and Who’s Leaving, Bellingham, WA quartet LipStitch chargefearlessly into the land of big amps and bigger hooks. Drawing inspiration from Pacific Northwest RiotGrrrl, 80’s punk-edged hard rock, and 70’s NYC pre-punk glam, Amanda Hodgins, Chris Williams,Danielle LeBeau, and Bryan Hunter cut their teeth playing covers around Puget Sound.Quickly realizing that there was some real magic in their chemistry, they transitioned into writing originalmusic that offered the hooks, simplicity, and joy reminiscent of the artists who inspired them in the firstplace. In fact, propelled by nothing more than word of mouth and a December 2018 two-track demo,LipStitch has already opened for Death Cab for Cutie, Odesza, The Coathangers, and Dude York. Withthe help of Seattle underground staple Rocket Heart Records, they’re ready to present their debut studiofull length to the world.
Written primarily in the fall of 2018 and 2019 as the band were entering new stages of their lives, Who’sLeft and Who’s Leaving traces the process of grappling with grief and eventually coming out the otherside. “As we were entering our late 20s and early 30s, a lot of our friends and people vital to ourcommunity moved away. It felt scary and confusing” says Hodgins. “We realized all of us wereexperiencing some form of grief, and we wanted to write songs exploring that.”From the very beginning, this album was fueled by camaraderie. After getting married, Williams (leadguitarist) and Hodgins (vocalist; rhythm guitarist) found a place with a big enough garage to host bandpractices. Their place was always intended to be full of music and friends, which is what happened afterWilliams met LeBeau (bassist) at work. They quickly bonded over their love of gear and big, greasyburgers. Hunter (drummer) and Hodgins were already playing together in a separate project. Each of themoften crossed paths; cooking together, telling jokes, and sharing beers. Naturally, they started bondingover their love for loud guitars and catchy riffs, and decided to start writing something together - This ishow the first few tracks of Who’s Left and Who’s Leaving were born.
Fittingly for a band that stands tall in the broad canon of “garage”, Who’s Left and Who’s Leaving waswritten and recorded in the garage of the house shared by Williams and Hodgins. This might assist withthe gritty acoustics, but to truly capture the right sound they brought in good friend Erik Takuichi Wallaceof Shibusa Sound and his portable recording rig. “Erik not only helped us record and mix this, he gave uslots of tips and tricks” tells Hodgins. “Erik gets very intimate and specific in his critiques, which weappreciate. We wouldn’t sound half as good without him.” Staying true to their Bellingham roots, theband invited local friends and fellow Bellingham musicians to perform guest vocals on several trackswhich included Kelsey Tribble of The Censors, Whitney Flinn of Cat Valley, Kristen Stanovich of CatPositive, Justin Taylor of No Guts, and Ridge Bernosky of The Interrogation.
At the heart of this project is four friends who enjoy each other’s company and are nostalgic for simple,earnest songs. “Living in this world the last few years has been discouraging for a lot of people.” saysHodgins “The world is burning around us. Everything feels urgent. Sorting out those feelings - butfinding friendship and hope anyway - is what this record, and this group, is about.”