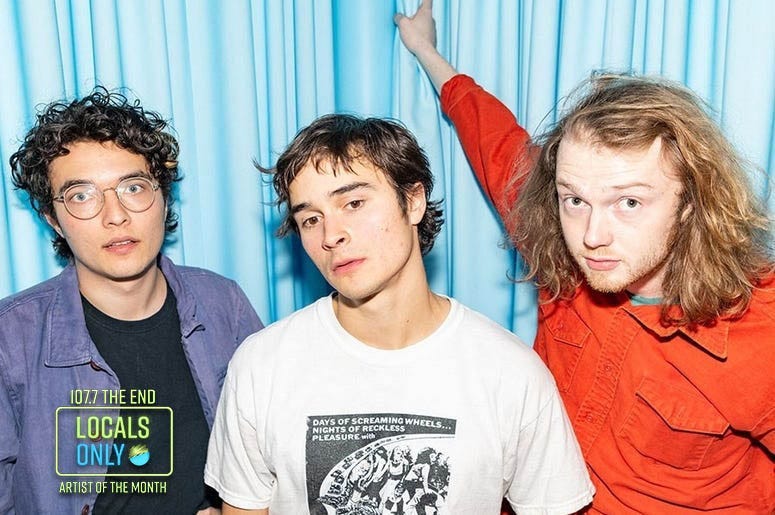 July 7, 2020 07/07/2020 4:23 am
We received some very good news recently when Seattle band Naked Giants announced the release of their upcoming album. The new release titled The Shadow will be the second full length from Naked Giants and is scheduled for release on August 21st.

The announcement of the new album was accompanied by the release of the music video for the new single, "Take A Chance". The video was clearly made during quarantine, but it seems like the band is still having a very good time and the song is of course, really good. Check it out below and tune in to 107.7 The End to hear it all month long!

Tune in for two hours of local PNW music every Sunday at 8pm with Locals Only!

Learn more about our July Locals Only Artist Of The Month, Naked Giants, below;

Seattle’s Naked Giants burst onto the national music scene with their 2018 full-lengthdebut,SLUFF, a candied and insanely catchy blast of unhinged pop-punk-grunge-surf-rock. But if that record was the sound of, as one reviewer labeled them, a trio of “affablemiscreants just out of high school” getting their musical rocks off, thenThe Shadow, theband’s new and second studio effort, is in comparison a decidedly more—what’s theword?—mature offering.That is, if “mature” is the appropriate term for an album where one member iscredited with playing a fun machine, and another merely with “charisma.”Andso, welcome once again to the extraordinary and eccentric world of NakedGiants. They might be older (average age: 23) and wiser, but the band members—singer and guitarist Grant Mullen,singer andbassist Gianni Aiello and drummer HenryLaVallee—are stillout to conjure a rip-roaring good time.In fact, cue upThe Shadow, and within little more than the first five minutesyou’ve already careened through the throttling “Walk of Doom,” a blitz of post-punkriffing, wastoid gang shouting and toms-heavy drumming; the singalong anthem-for-the-disaffected “High School (Don’t Like Them),” in which Mullen aloofly intones of formerclass mates, “Now you’re lying on the couch and life’s busted/ Never made a big stingor erupted” over waves of ratty, distorted chords; and the taut, falsetto-flecked “Take aChance,” a Talking Heads-ish funk-rock workout with bits of shimmery synth and lo-fislide guitar riffing thrown in for good measure.“It’s all about how many smiles can we crack on the people that are listening tothis music,” LaVallee says by way of something like a mission statement. “And also onthe people that are playing it.”And to be sure,The Shadowis an energetic and exhilarating musicalrollercoaster ride. But there’s also a whole lot more to it.Take, for starters, “Turns Blue,” an ‘80s-tinged dream-pop torch song that floatsalong on an undulating bass line and heavily reverberated dew-drop guitars beforeerupting in a soft explosion of pounding drums and harmonizedna-na-na’s in thechorus.

Or “The Ripper,” a slice of mellowed-out, dark-toned psych-folk that, in lines like“wash me away ‘til my color’s gone,” explores, as songwriter Aiello puts it, the “effects ofWestern cultural domination and colonization attitudes from the large scale onto thesmall scale” (even if, LaVallee admits with a slight laugh, he interpreted those samelyrics as being about “ripping bong hits”).Subject matter aside, the point, of course, is thatThe Shadowreveals new andwelcome layers to the Naked Giants sound, both musically and lyrically. For everyanthem like the wiry, slamming “(God Damn!) What I Am” (“I’m feeling all right / I've gotmy band and my song is playing all night”), there’s a “heartfelt acoustic ballad”(LaVallee’s words) like “Song for When You Sleep,”a junkyard-blues workout like“Better Not Waste My Time” and a socially-conscious new-wave jam like “Television,”where over a loopy, hypnotic groove Aiello laments, “Eighteen, nineteen dead this week/ But have you seen this fucking meme?”And yet, for all its wide-ranging sounds,The Shadowis also an extremelyfocused set. Credit this in part to producer Chris Funk, who got the band out of theirSeattle hometown to work closely with him at his ownHalfling Studiosin Portland,Oregon.“We were pretty much isolated there for two weeks, which was different fromSLUFF, where we were recording in Seattle and going back and forth from our homesto the studio,” recalls Mullen of working with the Decemberists multi-instrumentalist.“This time, we were totallyimmersed in the process.”And what did Funk bring to the proceedings?“A lot,” says LaVallee. “I don't know if you’ve seenGame of Thrones, but there’sthis one character who’s, like, Stannis's guide, and he kind of looks like Chris Funk. Itold Chris, ‘You’re kind of like that guy—an older warrior who's seen the road,’ youknow?”Mullen picks up the thread, offering some clarity in the process. “Chris is such acreative guy, and such a musician himself, that it felt more like we were working withanother songwriter and collaborator as opposed to just a producer,” he says. “He wasguiding the project, but he was also just enjoying himself. Sothe sessions had a realnice and easy flow. We were all very inspired the entire time.”Regarding the variety and

depth of the music onThe Shadow, Mullen continues, “We realized we didn't have toimmediately go to ten on every song, which is what we may have done in the past.”Rather, he says, “we were able to lay back and focus more on the details of the musicas opposed to just writing the catchiest, most energetic things we can think of.”As for what led to this development?“It’s life experience, andthe sort of conscious awareness that comes with thatgrowth,” Aiello says.Much of that experience and conscious awareness came courtesy of the band’sexhaustive tour schedule over the past year and a half. Naked Giants have always beenknown as a band that truly comes alive on the stage, and they only further solidified thatreputation since the release ofSLUFF, playing sold-out, sweaty club shows on theirown and also hooking up with Car Seat Headrest for a long outing where they pulleddouble duty as both the opening act and backing band for the Will Toledo-ledheadliners.In terms of what they gleaned from the experience, Mullen says, “I think it gaveus a perspective on how we want to craft music, and how we want things to actuallysound. Because you’re playing the same songs hundreds of times and you’re watchinghow the crowds respond to them, and a lot of times these are people that have nevereven heard of you before. It was a valuable lesson.”And also a fun one.“It's so awesome to finish your set, have a 10-minute break and then go out foranother one,” LaVallee acknowledges. “Also I'd be a fool not to mention it was a dream-come-true to play at some of those venues in front of big crowds, and to also be a partof the headlining act.”Which is very different from Naked Giants’ earliest experiences, playing houseparties around Seattle when Aiello and Mullen were students at the University ofWashington. “The crowds were just crazy 19-year-olds, loving our heavy kind of music,”Mullen says. “I remember a feeling of high risk at every show, because everyone wasright up against the band, and there was always some drunk guy stepping on yourpedals or bumping into your gear. It definitely influences how you attack the music.”

Aiello concurs. “We kind of got our schtick by being this opening band that wasthrowing everything we had at the audience. But as our set time started to get longerand as we started playing with Car Seat Headrest, we started to notice the importanceof having a little bit of cool-down time. It helps to switch things up instead always goingfor it full-on.”Which brings us back toThe Shadow, and also to “The Shadow” itself, the epictitle track that seems to encapsulate everything great about Naked Giants ca. 2020. It’sa slow-burning behemoth of a song, creeping along on crashing drums, a fuzzed-out,bloated bass line, skronky distorto-chords and acid-freakout guitar squiggles and thenbuilding to a massive chorus in which the members chant, almost as an incantation, thatthey “want to see the shadow.” Halfway though, the song erupts into a Sabbath-damaged, double-time metal chugger, with all three Giants bearing down hard on theirrespective instruments and bringing the whole thing to a glorious, noisy climax.And what, exactly,is the Shadow?“It’s the core of what we're dealing with on the album, which is facing thedarkness,” Mullen says. “It could be your past, or some guilt that you’re holding onto, oran issue in the world around us—it could be anything.”These are concerns, Aiello adds, like “information overload, social media anxiety,racial injustice, all this terrible shit that people have to deal with and that we as youngpeople are struggling to navigate in our own lives.”But whatever the particularshadow is, Mullen continues, “it’s about looking it inthe face and embracing it, and having the desire to deal with it.”All that said, LaVallee also adds that “a shadow represents darkness only in thepresence of light. So even if there’s this innate darkness,The Shadowis also a story oflight, and an expression of life.”And it’s an expression the band looks forward to sending out into the world—andthen, hopefully, beaming into each and every audience member’s skull from the stage.“When we’re playing we always have to give it 100 percent, because otherwisewhy even bother doing it?” Mullen says. “There’s such a power in making that emotionalconnection.”

“The way I look at it, people are coming together for the music, and we're theconduits,” adds Aiello. “And sometimes people are going through something amazing,and sometimes they’re going through something terrible. You have to be aware of theenergy in a space and give the people what they want and let them have a good time.”It’s a credo that LaVallee describes as “setting fire to the darkness.”"Like, ‘Let's get some flood lights on all these dark places in our audience’s livesand our own lives,’ ” he says, then laughs. “Let's illuminate all of it and let's flush out thatdarkness—with the power of rock!”