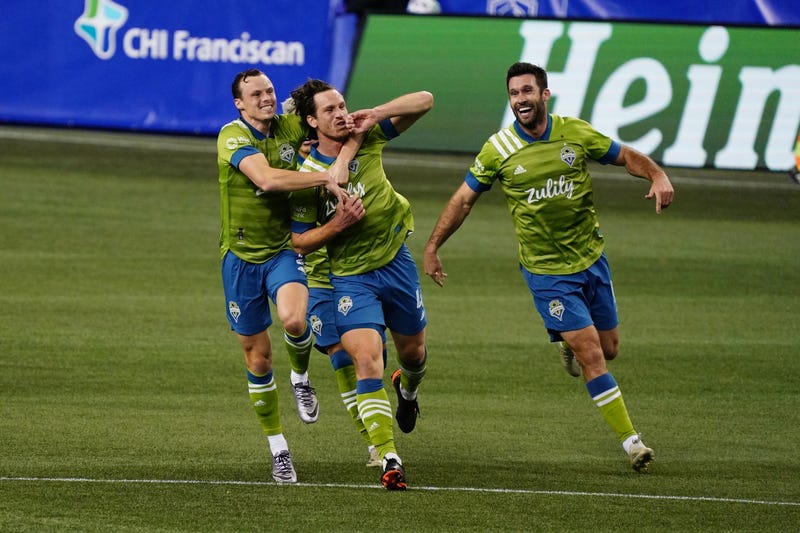 Gustav Svensson - that's who to look out for... Photo credit by Mike Fiechtner / Sounders FC Communications
By Gregr

The Sounders FC are real good. Like come back from 0-2 with only fifteen minutes to play and still win good. Saturday marks four trips to the biggest stage in Major League Soccer, but previously they’ve been to three of the last four MLS Cup Finals where somehow they’ve faced Toronto every single time. Sounders are 2-1 and I have the star tattoos to prove it.

I host a Sounders FC themed podcast, Full 90 Soccer Time, and we have tons of #hotgarbage takes about soccer-y things

1. Columbus manager Caleb Porter led the Fartland Timbers to an MLS cup victory in 2015. World Soccer Talk once described him as having the charisma of a keychain and it changed me for the better. I now know you can make fun of people by comparing their character traits to things you see on your desk.

2. There will be fans in the stands which would be an advantage if you played in Seattle where the fans actually show up and cheer regularly.

3. It could also be why two of Columbus's star players have been ruled out for COVID-y reasons (though Seattle has had its own problems with Covid.)

Absolutely brutal for Columbus, the final and MLS, to say nothing of the players themselves. Get well.

4. He’s never scored a goal before so why not score 50, keep your eyes on crazy legs #5, Nouhou. We call him the Fifty-four-thousand-dollar Man for playing with the flair of a Champion’s League star but the experience and league minimum pay of MLS. If you search Twitter for “nouhou bicycle” you’ll find he’s had in-match, bicycle kick clearances at least 4 times none of which called for it. Following last year’s shocking destruction of LAFC, on his walk off the field someone hucked a full beer at him and he played it first time like the Ruidiaz of shitty stadium swill.

.@NouhouTolo you’re a real one for this.

5. In soccer they can tie, yes, during the regular season, but when it comes to a final, they’ll play ‘til the death! Literal beheadings decide the event should they go past 90 minutes of regular play. You’ll notice we sub in our tank, Torres, late in the match if things look stalemate-y. Grab your battle axe, steer skull helm and get swinging, peasants. (Branden is making me say that it will actually go to 30 minutes of extra time and if still a draw resort to dreaded penalty kicks. The Sounders FC actually won their first MLS Cup Final from pk's.)

So that pretty much sums it up.

MLS Cup Final
Columbus Crew SC vs Seattle Sounders FC
MAPFRE Stadium
Saturday 12/12/20 @ 5:00p
Some version of FOX will carry it so that means it won’t actually start until like 5:27p, probably.