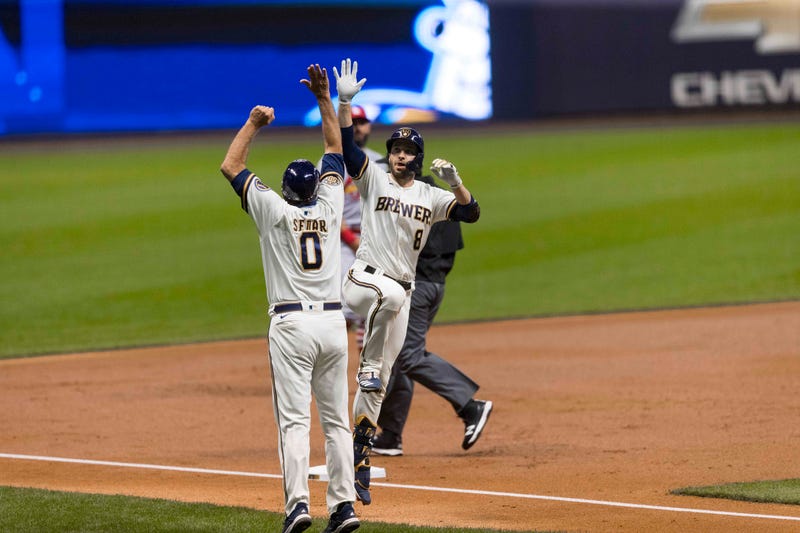 The Milwaukee Brewers' offense exploded against the St. Louis Cardinals in game three, 18-3.

The Brewers were able to get to Cardinals ace Jack Flaherty early on as Christian Yelich and Ryan Braun hit back-to-back solo home runs in the 1st inning. Milwaukee wound up scoring nine earned runs total off of Flaherty throughout his outing.

Keston Hiura and Daniel Vogelbach also got in on the action by recording four RBI each. Hiura hit his 12th home run of the season on a three-run shot in the 4th inning. He would also drive in an additional run due to a bases loaded walk in the same inning. Vogelbach came up a triple shy of the cycle in game three. Vogelbach hit his first home run in a Brewers uniform off of a position player in the 7th inning.

Corey Knebel finished the game with an encouraging outing. Knebel racked up six strikeouts in the final two innings of the game.

The Brewers will wrap up this five-game series with another double-header on Wednesday.

Tim Allen recapped Tuesday's win on the Bayview Shade & Blind Postgame Show. Make sure to tune in to The FAN before and after every game for the best Brewers coverage.

news
Couple charged in $2 million unemployment fraud scheme
news
Trader Joe’s: Over 4,400 pounds of frozen fish have been recalled
news
Wendy's debuts new chicken sandwich that you can try for free until November 8
news
Man arrested after throwing pumpkin at girlfriend during spat
music
That time AC/DC’s Brian Johnson got drunk and hunted for the Loch Ness monster
music
David Hasselhoff launches Kickstarter to deliver you metal music you didn't know you needed