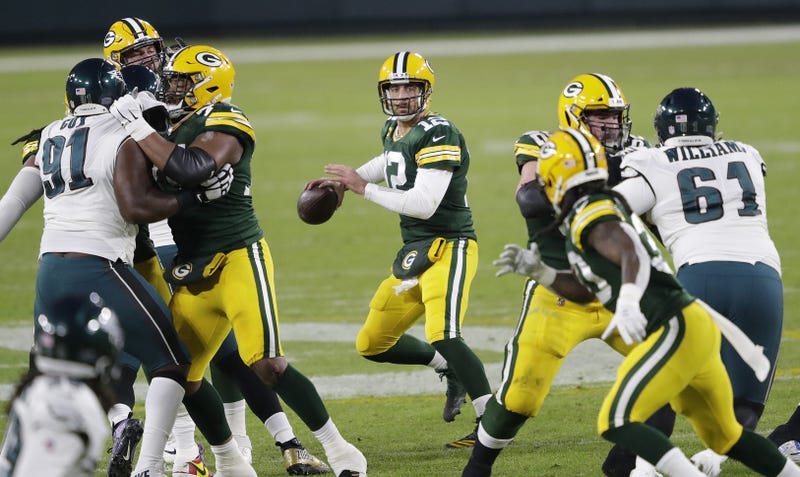 Green Bay, WI- The Green Bay Packers improve to 9-3 on the season after defeating the Philadelphia Eagles 30-16 at Lambeau Field on Sunday afternoon. In the win, Aaron Rodgers threw his 400th career touchdown pass to Davante Adams.

Aaron Rodgers finished the game 25/34 for 295 yards and three touchdowns with no interceptions. Rodgers is now the only player in NFL history with five seasons of at least 35 passing touchdowns. He has 36 on the season with four more games to play.

Late in the 4th quarter, Aaron Jones broke off a 77-yard touchdown run to put the game away after the Eagles made a late comeback. Jones finished with 15 carries for 130 yards.

On the defensive side, the Packers were able to get to the quarterback and sacked Eagles QB’s seven times today in the win. Dean Lowry, Preston Smith, Kingsly Keke, Za’Darius Smith, Rashan Gary and Raven Greene all contributed with sacks. Darnell Savage also intercepted Eagles quarterback Jalen Hurts late in the 4th. That is Savage’s third interception on the year and his third in the past two games.

Up next, the Packers will travel to Detroit to face the Lions. Kickoff set for 3:25 pm.

Check out the Green & Gold Postgame show with Bill Michaels and former Packers’ running back, Gary Ellerson, below!